The Mandalorian - a good adventure series 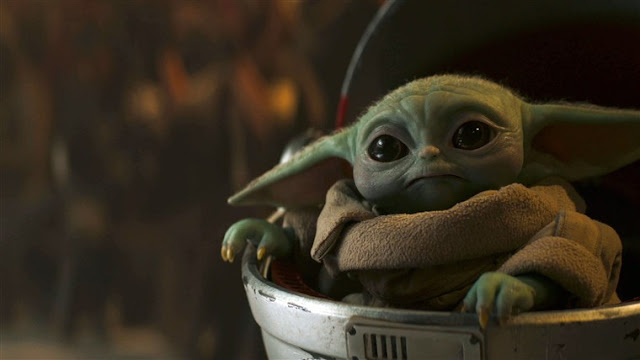 I watched the first two series of The Mandalorian and thoroughly enjoyed it - at the level of a series of (nearly all) well-crafted and exciting individual adventures with a satisfying and deepening emotional arc.

I didn't think it would 'work' having a lead character who wore a helmet that he 'never' removed; because I though that I would not be engaged by a blank-faced protagonist. But maybe the difference was that The Mandelorian's 'co-star' was the animated puppet 'Baby Yoda' who was so cute, and his behaviour so endlessly-fascinating, that I would be happy to watch him forever!

The production values were superb - much like a Star Wars movie; The Mandelorian's space ship, in particular, was so rugged and beat-up that it seemed real, and was almost like a third member of the gang.

For me, it was perhaps (along with the original trilogy and Rogue One) one of the best Star Wars Universe things that I have seen: time will tell.

I haven't seen any Star Wars stuff since the prequels; I'd kind of written the whole franchise off. Maybe I'll give some of the new stuff a shot.

I was surprised at how much I liked that show. It's a fun combo of Wild West meets Star Wars.

@Matt - I was surprised too - wasn't expecting to like it. Some of the episodes do seem very Clint Eastwood like (Western in Spaaace indeed) - but I'm not a great Western fan, so that's probably not why I personally liked it.

I only lasted until episode 4/5 when the progressive stuff starts to show up. I guess I should have expected it coming from Disney...

@Colin - There isn't a progressive trajectory; but episodes come from various hands, and - as always, and in every modern product - there is a bit of political correctness in some of them; but it does not accumulate nor does it affect the arc.