The Vision of William Arkle - the question of Mother in Heaven


I came to the point of love at my inmost heart, and I was glad and at rest, like unto the end of things. But the point was not a point, it was a doorway opening both inwards and outwards. Though I had thought to rest there for ever, I could not do so for long, since my deepest feelings pulled me. So pushing gently inwards I passed through the doorway and went in.

Then it was if I had walked onto the palm of the hand of my God, who had now become my great friend. The palm of His hand was as the most sensitive place in his heart might be. It was tenderly aware and responsive, so that I stopped still in case I should hurt it.

In some strange way the hand was the heart and it extended beyond my understanding in all directions unto the fingers. While the palm of this great hand was content to be at rest, as I was, the fingers had a longing in them to express the nature that was the heart of the hand. The place that had been a doorway had now become like a whole country opened from within...

Then go up to this house. He will ask you in and She will greet you there. Father and Mother of us all, dwelling in a valley of the hills that are not, but are the hand that is the heart always. From this place their spirit never moves and in this place is the measure of all things kept safely. But you may go in and touch direct the uttermost. Then you will have the foundation about you you did not know to need. It remains in the smile there and all things are borne up by it. This is what is served to every friend who comes...

With a voice that needed no sound, my friend spoke through the whole of the vast country. His hand and His fingers were full of the expression of each word. The fingers not only held fast the treasure of the hand, but they were also the means of discovery. The spirit of this discovery was in need of companions, and I could be such a companion. For that which remained to be discovered lay out beyond the finger-tips of God's person in a larger reality of being...

Long would be the telling of this aching hand whose heart shall hold friends and teach the art to many in that country that cannot be said, between whose spirits the potency of difference so gladly spreads to uncover and display a growth to all things new.

From The Hand of God by William Arkle

The Hand of God Prose-Poem - excerpted above - strikes me as an account of William Arkle's prime and (as it seems to me ) genuinely revelatory vision; which contains the compressed essence of his message, which he elaborated over a period of decades in various different forms - through prose narratives - factual and fictional, poetry, paintings, music, and (especially in the 1974 book A Geography of Consciousness) formal geometric/ engineering/ scientific/ philosophical analogies.

So the above excerpt contains: 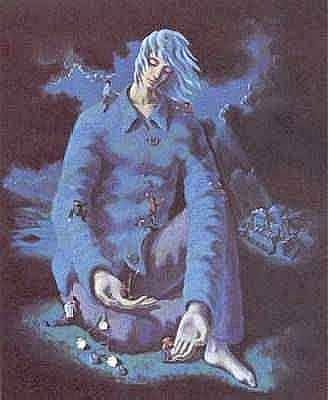 Then the idea of a Mother in Heaven, as well as a Father 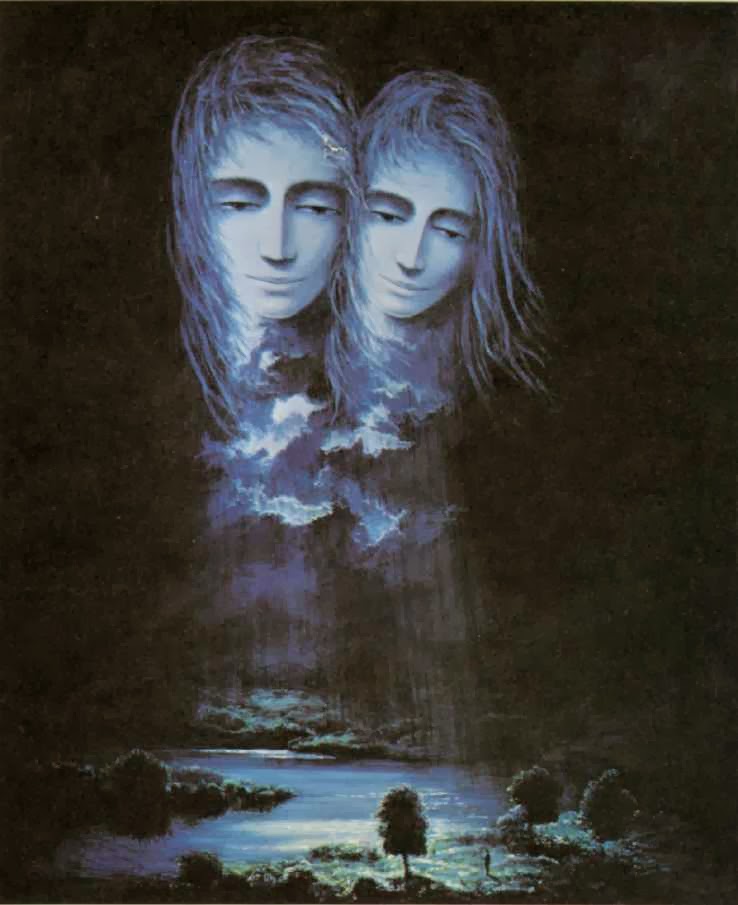 Then the key to all the elaborations - that the creator Father (and Heavenly Mother) wanted more than anything to have children who might grow towards divinity and eventually choose to become friends (in an extremely elevated sense of that word) with their Heavenly Father (and Mother). 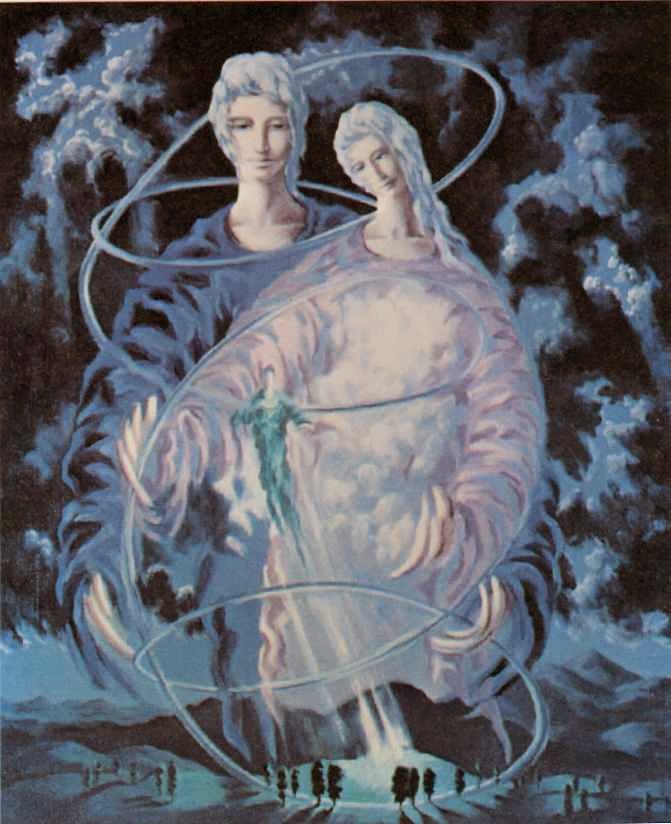 The whole of creation is then set up with that purpose in mind.

This matter of a Heavenly Mother is perhaps the most striking to Mainstream Christians, and is one of those undecided aspects of Mormonism.

The divine parenthood is included in the language of that major (and wonderful) policy statement The Family: a Proclamation to the World - "Each is a beloved spirit son or daughter of heavenly parents...".

Yet, this is not an official doctrine, nor from a specific church-wide revelation, nor a required belief; and it is specifically prohibited to pray to or worship Heavenly Mother (She is not regarded as equivalent to Heavenly Father).

Mormons are therefore free to believe in our Mother in Heaven, or not.

So what do I think, personally?

I am not certain. Initially I believed in Mother in Heaven, then I found I did not (regarding God the Father as solitary and eternal before having children - God the Father as unique exception to the need for divine marriage.

Now I am inclined to believe again that we do have divine parents, although I am uncertain (and incurious) about the origin of Heavenly Mother.

(My tentative theory is that all pre-existent spirits are either male or female; and the first thing God the Father and primary creator did (as a male) was to take a pre-existent female spirit and endowed her with divinity. She always had and continued to have autonomous agency (free will) and they both chose eternal celestial marriage and became the primal parents - all other personages being their children.)

Also, I have found that Arkle's revelatory vision have enhanced my confidence that there is a Heavenly Mother - because:

1. I regard his primary and basic vision as a valid revelation (although I do not find all his elaborations and extrapolations and systematization to be compelling).

2. I see not the slightest sign that Arkle had any knowledge of Mormonism; yet his basic vision seems strikingly convergent with Mormonism - so his witness of a Heavenly Mother looks to me like independent corroboration.

Having made that decision to believe, I find that it makes my heart leap with joy!

(Yet also a kind of fear and caution that I may be believing from self-gratification, and a fear of the contradictions with Mainstream Christianity.)

Yet the joy wins - and the simple symmetry between Mortal and Divine parents is a lovely thing.

That is a remarkably beautiful and powerful vision.

I know that, and it is another factor in my caution.

The Catechism of the Catholic Church includes "Because she gives us Jesus, her son, Mary is Mother of God and our mother; we can entrust all our cares and petitions to her: she prays for us as she prayed for herself: 'Let it be to me according to your word.'"

For Catholics, Mary literally is "our Holy Mother" or "our Blessed Mother" having given birth to our supernatural life. Similar to Dr. Charlton's suggestion, she is held to have been specially chosen by God and to have completely and freely accepted.

She is not an absent mother either, but an active and good (of course!) loving mother: she hears our pleas, comforts us, help guide us in spiritual growth.

What GG said. This shows you have a keen spiritual intuition, but there is no need to innovate here.

@GG and josh - I intend to write a post on this question - thanks for raising it.

My inclination is to assume that Mormons and Catholics (Eastern and Western) are describing the same psychological conviction and spiritual experience of a Mother in Heaven using a different explanatory scheme.

On the other hand, the identity of the Blessed Virgin Mary and the Mormon Heavenly Mother is (apparently) distinct - the one being in origin a Man (human woman) and the other being a God.

But then, of course, these are not permanent distinctions.

There is absolutely zero scriptural evidence that Mary was an 'avatar' of Heavenly Mother who had taken mortal form and was operating behind a veil of ignorance concerning her divine origin and nature - but neither is this possibility absolutely contradicted - and it does explain some aspects such as her sinless purity and complete devotion and assumption/ translation direct to Heaven (without resurrection) - and her continued miraculous interventions.

Probably, for most people for whom our Mother in Heaven is a spiritually experienced reality, her exact nature and origin are of secondary (or no) significance - she is the mother of Christ, and she is (in some real sense) the mother of us all.

Perhaps that is enough and as much as we need to know.

Ezekiel 16, the entire book of Hosea, then, would be discarded?

@C - Care to explain, link or cut and paste a relevant passage?

Well, the Ezekiel passage is one of the most graphic in the Bible, but the essential analogy is of Jerusalem as God's adulterous bride. Likewise, the entire book of Hosea is a very beautiful love story to Israel, God's wayward-but-redeemed wife (exemplified in Gomer, wife of the prophet Hosea. She fled him to live a life of prostitution, and he was instructed to literally buy her back from her pimp).

I mention the Old Testament passages because I'm familiar with the anti-Trinitarian stance that would dismiss Christ's innumerable references to the Church as His Bride as being somehow different from God the Father's.

The imagery of marriage is used as often as the imagery of children, although in Ezekiel 16 both analogies are used, to the dismay of moderns. You prefer the KJV, then:
"3 And say, Thus saith the Lord God unto Jerusalem; Thy birth and thy nativity is of the land of Canaan; thy father was an Amorite, and thy mother an Hittite.

4 And as for thy nativity, in the day thou wast born thy navel was not cut, neither wast thou washed in water to supple thee; thou wast not salted at all, nor swaddled at all.

5 None eye pitied thee, to do any of these unto thee, to have compassion upon thee; but thou wast cast out in the open field, to the lothing of thy person, in the day that thou wast born.

7 I have caused thee to multiply as the bud of the field, and thou hast increased and waxen great, and thou art come to excellent ornaments: thy breasts are fashioned, and thine hair is grown, whereas thou wast naked and bare.

8 Now when I passed by thee, and looked upon thee, behold, thy time was the time of love; and I spread my skirt over thee, and covered thy nakedness: yea, I sware unto thee, and entered into a covenant with thee, saith the Lord God, and thou becamest mine.

9 Then washed I thee with water; yea, I throughly washed away thy blood from thee, and I anointed thee with oil."