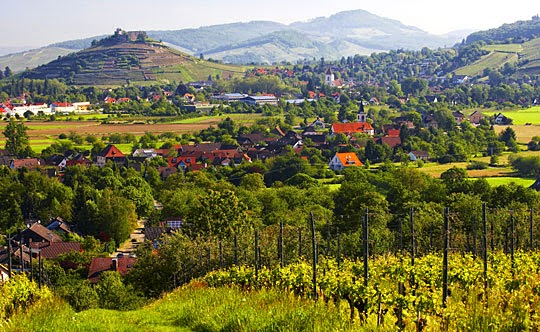 When I am in the best mood and magic for a holiday - such as when I went on a day trip to Staufen in Germany, near to where we were staying in  Freiburg im Breisgau - it is as if the modern, often mundane, surface is transparent and allows the romantic past to shine through.

I can recall the contrast between the cozy (gemutlich) restaurant where we had coffee and cakes (served by sturdy and pleasant, uniformed middle aged waitresses), and the neat and well ordered town square - with the claim to fame of being the place where Faust was drawn-down to hell; as depicted on the wall of an inn: 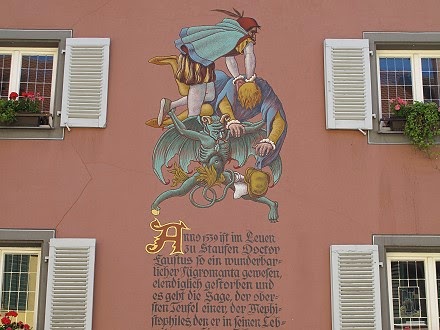 All this was fourteen years ago, and my son was a small toddler who could still be carried on a front sling. But his tolerance for being carted about was limited, and we tended to work around his tempo and preferences. So when we set out to look at the romantic ruined castle, which involved weaving through vineyards, pushing a buggy; we didn't actually make it to the top - but stood gazing up at the castle with a kind of yearning... I recall not being too concerned about our 'failure' to ascend the little hill, but trying to project my 'spirit' up to that castle, and succeeding; and coming away feeling I had experienced the place very deeply and completely in just a couple of hours.

That hypersensitive mindset is characteristic of my best holidays and visits - and indeed of life in general .

Note: the above photographs are not mine, but were harvested from Google images.
Posted by Bruce Charlton at Friday, November 21, 2014

It's a mindset easier to capture on vacations and holidays, that's for sure. I associate it with C.S. Lewis' Desire.

I think I slip into this mindset quite easily due to mostly being on my own during the day. It has its rewards but I have to resist it to some extent in order to produce. Walking up to a local iron age hill fort I tend to "feel" some deep connection with ancestors and the soil but can't express it very well. I have learnt not to mention this to any but closest friends though....and you of course Bruce.
Does anyone else experience the effect of the landscape coming alive and you being aware of your own problems being so insignificant. I have found this a powerful time to pray.

@David - I think it is probably a matter of becoming aware that the landscape *is* alive(and always has been). If only this state were permanent, or at least frequent and unforgotten.