*
My parents are from the North East of England, and that is where I have lived for most of my life; however, I spent all of my childhood in the South West - and for a long time I was not able to see a link between the two diagonally-opposite regions!

But I later discovered that they were both on the King's side during the English Civil War: 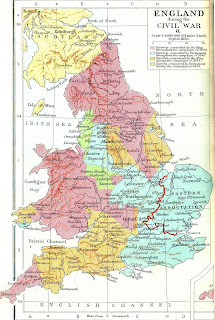 As a teenaged socialist I (of course!) sided with the Parliamentarian 'Roundheads' and Oliver Cromwell - but I soon grew to see the error of my ways, and have been a Royalist-Cavalier sympathizer for my mature adult life; and since I became a Christian I have acknowledged King Charles the First as a Holy Martyr.

Clearly, English geography has had a deep and lasting influence...

Back when we homeschooled, I assigned my older boys Children of the New Forest for a book report. I never read it but it seemed like interesting historic fiction and I wanted them to have an appreciation of our English heritage.

I have distinctly mixed feelings about the English Civil War. Many Latter-day Saints can fondly trace Puritan roots, as can I, but Mormonism is in some ways antithetical to the remnants of the Puritan establishment. Cf. the case of my ancestor, Anne Hutchinson. One problem is that the Puritans didn't have a church. They had a movement. And that movement was never unified and eventually splintered. As an American I have some sympathy for the Levellers, many of whom favored Parliament and freedom of conscience over dictatorship. Cromwell, being a dictator, broke with them and crushed them as best he could.

The regicide was a ghastly error, fatal not only to the king, but ultimately in turn to some of the regicides. Genealogy being what it is, I am confident I have ancestors on both sides of the English Civil War. I have ancestors from all over England.

In America, I see the courtly American South as Cavalier and stern colonial New England as Roundhead. But even as a Northerner by birth with prejudices against the South, I have grown to appreciate the American South.

English geography is still confusing to me. I am reading Churchill's History of the English Speaking Peoples (he really disliked Cromwell) while frequently googling up maps. And the Wars of the Roses can really confuse Americans.

I'll bet that HBD Chick has some interesting things to say about your geographic roots.

* Cromwell, being a dictator, broke with them and crushed them as best he could. *

To be fair to Cromwell, the Levellers were crazy radicals who were trying to monkey with voting and Parliament or simply launch a coup because they lacked the support to enact their program otherwise.

The Levellers were a diverse group, as were the Diggers and Fifth Monarchy Men. Everyone was trying to monkey with Parliament, including Cromwell, and thoughts of a rising or coup against the de facto military dictatorship were in the air from many quarters. After Cromwell's death the whole country seemed happy with the English Restoration.

The Levellers published a newspaper called The Moderate. The crazy radical ideas of the Levellers, such as extended male suffrage, regular Parliamentary elections, equality before the law, the end of debtors prisons, and religious tolerance, can be seen in the U.S. Constitution as well as in subsequent British history. It took a century and a half to enact their program.