*
It is striking that - although men make up the great bulk of geniuses in most fields, there are plenty of women among the genius novelists and some poets (but no playwrights) - two of my current favourites are JK Rowling who wrote the Harry Potter series, and Susanna Clarke who wrote Jonathan Strange and Mr Norrell - which are currently my favourite fictions by living authors.

Looking at them in terms of personality type, there is a great difference (so far as can be judged from public media - all this that follows is my opinion, inference and guesswork). 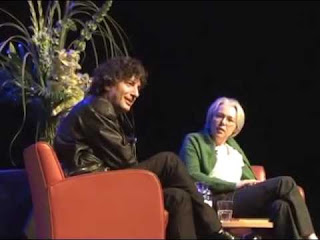 Susanna Clarke being interviewed at a public event (the, unseen, shoes are flat, comfortable 'pumps')

Susanna Clarke seems a classic bluestocking type, in terms of her rather reserved, even shy, public persona - and her non-celebrity - one might even say reclusive - lifestyle. She is a very pleasant looking lady, but - unusually nowadays - has not dyed her hair and is naturally grey, she dresses traditionally and modestly, she does not project sexuality. She is a slow and careful writer and has only published one novel and a few short stories. She seldom gives an opinion on public subjects - although everything suggests she has broadly mainstream Leftist views (with the exception of being patriotically English). 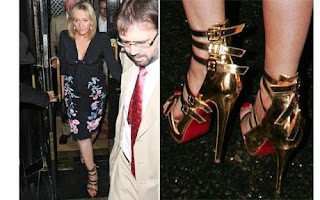 JKR in skyscraper shoes and plunge neckline at a movie premiere

Joanna Rowling is in contrast a very public celebrity - never out of the news, making pronouncements on many subjects, and allying with several fashionable Left Wing causes. She presented herself in a sexualized manner, having had plastic surgery and wearing fashionable and immodest clothing.

In both womens' great works, there is an underlying Christian ethos; although I gather that Clarke is not a Christian and Rowling is currently a very liberal Christian (or else, as I believe, apostate and not a real Christian nowadays - even though she clearly was when writing Harry Potter) - however, in my understanding, the Christian frame is essential to the excellence of both authors' best work.

The Endogenous personality can be regarded as a destiny - and only when it is so regarded, will genius achievement (potentially) follow. The interesting distinction between these two women, is that Rowling seem to me to have betrayed her destiny, while Clarke has tried to remain faithful to it.

Why do I say Rowling has betrayed her genius - simply because she is very-obviously very-concerned with how she presents herself to the public; and that acts to sabotage genuine quality, high-level achievement... genius. (This extends to creating a distorted, and dishonest, and self-serving mythology of her own life as a writer.) Rowling is consciously, almost systematically sabotaging her own destiny as a creative person. Unless she repents this, she will certainly have destroyed her own genius.

But the situation is not symmetrical. Whereas Rowling cannot produce anything great again, because she has eliminated an essential element of great work; Clarke will not necessarily produce another great work even if she is faithful to her destiny, because achievement may be blocked by the lack of other necessary factors - such as health, or luck.

This is, indeed, what corrupts so many artists, why the culture of celebrity (of 'success') has been lethal to so many geniuses in recent years: on the one side they have a certainty of worldly-success (money, fame, status, power) - offered them on a plate, or indeed thrust-upon them; while on the other hand there is only a possibility of doing more great works.

Here-and-now certainty versus the mere possibility at some point in the future - the public world versus personal destiny - Pleasure versus Fulfillment - Prestige versus Creativity - Man versus God...

Isn't the fact that she wrote Harry Potter enough?

Is the caveman who invented fire the lesser for not having invented the wheel as well?

If J.K. Rowling never wrote again, Harry Potter is enough to cement her in the pantheon of great English authors.
For all things there is a season. Each of us has our moment in the sun, when we shine our brightest.

I have experienced times in my life where I was working hard and producing great work and I knew that, as long as I lived I was never going to do something as well as I had at that moment (at least in that area I was working in at the time). Life is transitory and imperfect. We need to cherish what we have, not bemoan that we were once great and no longer are. Men age, men die, and this gives younger men yet to be born a chance to shine. The japanese term for this sort of thing is "Wabi-Sabi".

Rowling had the perfect set of circumstances; her poverty, her great talent, her desire, her deep christian principles that color her work, her both lighthearted and serious way of storytelling that make for a profound experience in her reader. I still remember her character of Neville and dumbledore's quote: “It is not our abilities that show what we truly are. It is our choices.”
She spread that incredibly simple yet important message to millions of people...this is infinitely a good thing. I forgive her for not being perfect her whole life, even for being a disappointment. But for the moment in time when she wrote that, she hit her sweet spot, and it was and is beautiful.

@jjbees - I agree with you.

And JKR completing the Harry Potter series so magnificently (the last book is the best, in my opinion) while under the spotlight of, and being relentlessly harassed by, the modern mass media was an astonishing achievement.

But now that JKR is world famous as a writer and 'personality', it is worth pointing out that she is no longer the same person who conceived and wrote the Harry Potter series - and for people to be aware of the incompatibility of the lifestyle of major modern success with top-notch creative achievement.

By contrast, Susanna Clarke, who has (perhaps) accomplished something of similar quality in literature, is all-but unknown as 'an author'

- yet Clarke is striving to keep her lifestyle suitable for achieving further work of the highest quality - and she deserves great credit for that!

This might be a good opportunity to mention an author that might be the North American J.K. Rowling, Canadian-born Eleanor Cameron. She created the "Mushroom Planet" series:

It's best to see them in the early editions with the original pen-and-ink illustrations, the ones that show a needle-nosed, four-finned rocket ship out of pre-Sputnik era fantasy.

While Wonderul Flight begins in a prose style that seems aimed at six-year-olds, a few chapters in Cameron forgets herself and shifts to the more adult style that characterizes the rest of the series, brevity being the main concession to children's attention spans.

I read the first four in elementary school in 1965, then reread those, and the final book for the first time, in 2000. They hold up well.

Though thirteen years separated the publishing of the first and last books, the events of the entire series take place over eighteen months.