*
I don't go looking for these things; but not long ago I reported that the Salvation Army, which was once one of the best charities in the UK (as well as being a Low Church Protestant Christian denomination), had fallen to Leftism -

Now I have to report the same for the Royal National Lifeboat Institution (RNLI) - which used to fund a 24 hour volunteer sea rescue service around the coast of Britain. This charity has some particular local associations for me since the Grace Darling story of Victorian times - described to all school-children of my generation - happened nearby; and Newbiggin by the Sea - where I spent most childhood holidays - had one of the earliest lifeboats, responsible for saving many of the inshore fishermen.


But 'Conquest's Second Law' proves itself true again: which states that that any organization that is not explicitly Right Wing, will become Left Wing; and the RNLI has now become 'just another NGO', run by the usual politically correct gang of professional managers class and public relations officials.

(It is due to organizational takeover by the lethal combination of volunteer workers with career professional managers, public relations advisers, web designers, and 'Chuggers' (i.e. charity-muggers - trained and paid street collectors), plus donation-grubbing spammers and junk mailers; all sensitive to and influenced by lobbyists, single issue fanatics, Social Justice Warriers, grievance-mongers, and organized activists of every stripe...)

(Actually things are worse than Conquest hoped, since many explicitly Right Wing organizations become Leftist over time - for example this happened to Libertarians and Neo-Conservatives.)


How do I know this? - simply because I saw a blog comment then checked the RNLI website to see how they present themselves, and came across this:

It is not difficult to know when an organization of institution has become Leftist, because they are so proud of themselves that they cannot help but advertise the fact - indeed, if they did not advertise their politically correct moral posturing, there would be no reason to do it - so they can always be relied upon to out-themselves. In my experience, this method is never wrong.

The hyped-up, untrustworthy web pages delighted in describing how the RNLI are 'active' in a dozen third world countries scattered across the globe - apparently providing training in swimming, beach lifeguards and... whatever

- i.e. The usual ineffectual 'aren't I great!' stuff that Leftists like to fund themselves to do, so that they feel better about themselves and have something 'cool' to brag about at parties...


But the specifics of what the RNLI do in Africa, South America, South Asia doesn't matter to me, I am not interested - because they shouldn't be there: they are supposed to be running lifeboats around the coasts of Britain - that it what we pay them for!

We don't want the RNLI to do anything else at all!

Apparently, according to their own websites  they are now big on providing beach lifeguards... yes, that's right, the RNLI has expanded its portfolio away from the likes of oilskin clad volunteer car mechanics and shopkeepers risking their lives to haul people out of the deep sea... 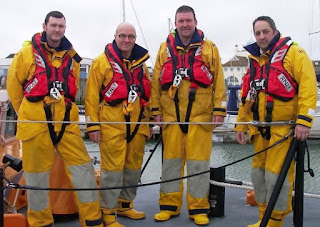 ...to a slinky wet suit clad version of the Baywatch babes and hunks. 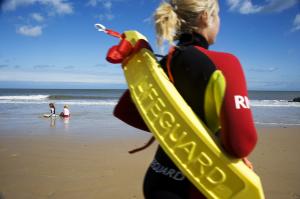 So that is it! - so far as I know there are now no honest, decent national charities in the UK. Not one. (And if you told me about one - I would be inclined to disbelieve you.)

From now on all my donations go to the small remaining number of serious Christian churches - preferably local - especially for evangelical work.

But I shall need to keep an eye on them too - because as soon as they stop explicitly proclaiming Left-taboo anti-sexual revolution doctrines (and sometimes even before that time), they will soon and surely fall to PC.

I think your decision is good. Spiritual, and not material poverty, being our age's greatest deficit - it seems the correct focus of financial support. As you said, it needs to be very specific and explicit though.

You mean their raison d'etre is not Making Africans Smile? How can this be?

These days Africa has cycled back into our public consciousness as the venue for such compassion-mongering. Africa has for centuries played this role in the West: the place where we find opportunities for showing how piously sensitive we are. Charles Dickens way back in 1853 created Mrs. Jellyby, a woman so consumed with saving the souls of savages in Africa that she completely neglects her own miserable, ruined family. Dickens called her activity �telescopic philanthropy, which captures neatly the long-range, abstract quality of such compassion and attention, which would be much more useful closer to home.

Amnesty International is a classic example of a simple, single issue organization that has expanded its mission and joined the left on abortion and SSM.

One reason why organizations experience mission creep, like a business seeking to diversify into new markets, is that they want to attract new supporters (leaders, donors, volunteers, funding sources, publicity) and keep the bureaucracy going once the initial market has been addressed, saturated, or in the case of the March of Dimes, when the market disappears. Since the Zeitgeist is leftist and since more government support may come from a leftist government (whose inclination is to spend more money), the natural drift is to the left.

Bugger me, Bruce, I drop by for the first time in many months, and here you are demolishing the reputations the last two national charities for which I retained any hope.


From now on we shall support two local charities in hopes that if they too become corrupted news will reach us by way of authoritative gossip - far more reliable than the Media these days.

The Boy Scouts of America are continuing their march toward a full rainbow with new rules announced today. Conquest's Second Law strikes again, and we also see the Third Law coming into play. Scouting could go into a death spiral. Membership has been declining, and if the faith-based troops head for the exits, the decline will be a near collapse. The BSA is top-heavy and won't be able to cover its overhead and pay its bureaucracy. This is very sad.

@Leo - The sexual revolutionists regard destruction of the organizations that they 'reform' as a price worth paying.

The rapid shrinkage of The Episcopal Church is an example - the policies which caused the collapse (e.g. appointing Gene Robinson a Bishop, electing Katherine Jefferts Schori as Presiding Bishop) are unrepented and being pursued with increased aggression (100 plus conservative parishes being sued by church central administration last time I heard - indeed this is how the bloated Leftist church bureaucracy survived - by selling off church buildings and facilities confiscated from exiting conservative Christians in order to pay their own salaries for a bit longer).

Reformers are recklessly indifferent to the institutions they reform at best, most often parasites, and frequently they are actually hostile - and use feigned reforms to damage (in hope to eviscerate and destroy) institutions that they resent or hate.