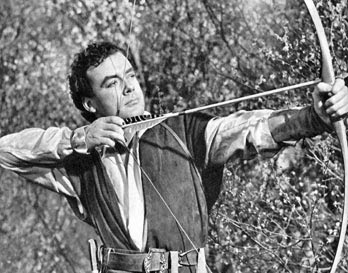 An early post in this blog described my childhood love of the idea of Robin Hood and his Merry Men, contrasted with much less greater enthusiasm for King Arthur and Round Table:

Indeed, although I have written a fair bit about the Arthurian legends over the years, I am not really much interested by the King or his knights, but mostly by Merlin. The appeal of Robin has also faded - I think a lot of it was related to the boyhood ideal of a gang or club; especially one in which each person has a special ability and role.

For this reason I disliked the beautiful and feminine Maid Marian - My basic idea was that girls were fine, but not in a gang - unless they were tomboys.

In fact my best friend aged about 7-9 was a tomboy - not from shortage of available boys, but because I liked her best. The ultimate accolade was that she was 'as good as a boy' - she looked somewhat like a boy (short hair), could climb trees, run fast, and when playing football she was usually 'picked' as one of the earliest choices.

Anyway, the appeal of Robin Hood is simple enough - especially on a beautiful summer's day like today, when The Greenwood is clearly the place to be...

When I drive through the Melbourne suburb of Ivanhoe, something I do frequently these days, that theme song often pops into my head. Thank you for posting that clip. It is interesting that a BBC-produced series used an American-accented theme song.

Your story reminds me of this:

Looking up the Adventures of Robin Hood, I think it may have been a joint US-UK production, since it was also shown on your side of the pond.

Those were the days of heroes and villains, masculine men and feminine women, good and evil (“feared by the bad/loved by the good” as the lyric says). Today we have anti-heroes, transgenders, and evil as good. Women are often depicted as victims of violence and abuse rather than being successfully and preemptively defended by swashbuckling, virtuous men. I miss the old days. Some have called the period 1948-1960 as TV's Golden Age, an age which included high culture shows as well as less sophisticated, but still positively-themed shows. TV gradually became a great wasteland, and then morphed into something worse as technical production values improved while virtue declined and sex and violence increased. How many producers can now use the word virtue without choking on it? Yes, there are still good shows, but mostly it's 57 channels with nothing on.