The 'sacred landscape' of England is the opposite of geometric!

We took a rail trip out to Hexham yesterday - a favourite place. The Abbey, in an earlier version built by St Wilfrid during Northumbria's 'golden age' was once the largest building in Europe, north of the Alps.

The views of the River Tyne and its valley, seen from the train window, are evidence of the wonderful strength of beauty that remains, waiting; and it is delightful that the buskers (i.e. street musicians - a melodeon player in one place, and two fiddlers in another) were playing folk music - including this (first) tune:


Anyway, as I travelled out I was reading a collection of John Michell's essays (Writings and rants of a radical traditionalist - recommended by this site's sometime guest blogger John Fitzgerald: Thanks!) - and reflecting on Michell's popularisation of the idea of the sacred landscape of Britain.

But Michell was a 'geomancer' and described the sacred landscape in terms of straight tracks, roads and Ley Lines of energy force - the ancient sites along along such alignments - and the detailed geometric/ astronomically-oriented  diagrams of monuments such as Stonehenge - this kind of thing: 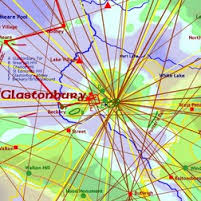 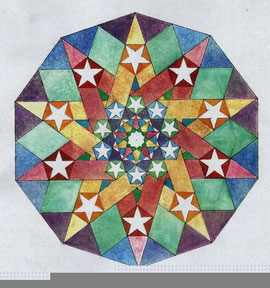 But, I am struck by exactly the opposite!

That the sacred landscape of England - in large and in microcosm is extremely irregular, asymmetric and un-geometric - and this applies to Neolithic/ Bronze Age - Celtic or Anglo Saxon designs, sites, roads etc - I see little in the way of straight lines, sharp points, repeating patterns: 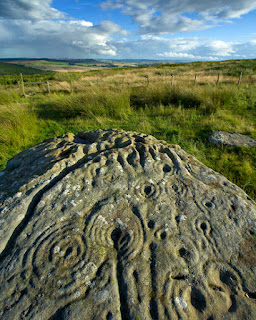 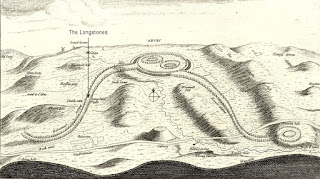 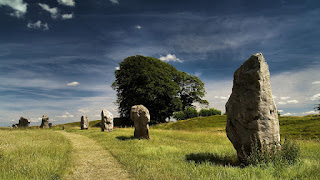 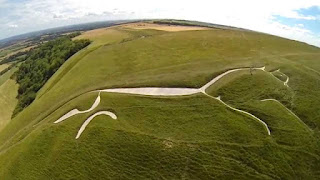 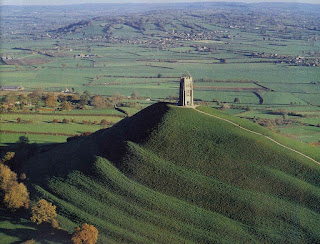 So, although I am pleased that John Michell drew attention to the subject of sacred landscape - I feel he was barking up the wrong tree in discussing it in terms of geometry and numerology.

This would, indeed, be appropriate to somewhere like Ancient Egypt, with its stereotypical obelisks, pyramids, right-angles - sharp edges, smoothed and polished stone - all silhouetted against a plain blue sky...

But England is all mists, rugged rocks, and wavy lines - it was an English painter (Hogarth) who said the line of beauty was a curve - and English literature prizes its array of unique characters (not 'representative' 'types') which fill Chaucer, Shakespeare, Dickens... Harry Potter.

John Michell was a Christianised (but not actually Christian) Platonist - with a strong element of the Pythagorean number mystic. This is alien to my temperament! - I find it a mystery why anyone would want to 'explain' spiritual beauty with mathematics!

Why would so many people want so much to describe everything as ultimately a matter of geometric shapes, or of 'fractals'!

Yet to regard mathematics as the underlying truth or reality - the archetypal world of 'forms' - is a deep and powerful urge among many, probably most, Western intellectuals since Ancient Greek times. So they see nothing absurd or contrived about covering the British landscape with abstract lines, angles and shapes drawn on maps, and aligned.

Although I reject this approach, I don't have any equally comprehensible and depict-able alternative for the sacred landscape - so me it is a miracle of intuitively sensed but undescribable rightness - like an unique character from Chaucer's Canterbury Tales or Shakespeare's plays, the 'design' can be shown and felt, but not made into a formula.
Posted by Bruce Charlton at Tuesday, August 09, 2016

The most beautiful building in the Chicago Loop, the Rookery, is somewhat rough and irregular in its black stone. Your landscape is very beautiful in its irregularity. Maybe we are closer to Nature with the irregular than with manmade lines....

Why would so many people want so much to describe everything as ultimately a matter of geometric shapes, or of 'fractals'!

In defense of fractals, their proponents (e.g. Benoit Mandelbrot in The Fractal Geometry of Nature) clearly perceived the deficiency of the classic geometer's toolkit of straight lines, conic sections, and sharp angles. The fractal remedy is doubtless incomplete, but it does assist the geometer who would come to terms with clouds and coastlines and trees.

@Karl - I have never been very impressed with the proponents of fractals - beyond the anciently-understood knowledge that nature is organized in a hierarchy with a kind of homology between each layer - so that the cell is somewhat like a whole organism is like a society; or Goethe's idea of the leaf being the archetype of the plant; or indeed that there is a broad principle of microcosm and microcosm being analogous ('as above, so below').

I attended a lecture by Mandelbrot some 25 years ago - and he came across, pretty strongly, as a bullshit merchant. Presumably that did not reflect his mathematical ability - which must presumably have been genuine (I don't think mathematics could be faked at the high levels, at least not in those days); but his proposed applications of mathematics to life.

I've always found John Michell's geometric and straight line theories unconvincing. A sacred landscape should be without the regularity and balance that implies. I'm reminded of this quote from 'Towards the Mysteries'. The subject is art but would apply here too.

"You should create without balance. Balance is not harmony. Balance is mechanisation of the mind. It is putting one thing against another and leaves no room for spontaneous whole-heartedness".

@ William. Glad to have your endorsement!

Michell certainly had *many* good qualities, and when he is right he expresses it beautifully; but overall he was only *half*-correct about things-in-general (as conclusively implied by his endorsement of the sexual revolution: his failure to perceive that it formed the most effective of all the post-sixties shock troops against traditional values. This is the most common mistake among those who are spiritual - eg Christianised Platonists - but without any more specific theism. We minimally need God, and as personal as possible - not merely deity).

I think you know that I completely agree with what you say there.

Another quote that has just occurred to me which might (loosely) apply is "Aslan is not a tame lion"!

Perhaps you should write sometime about the importance of landscape in lewis's writings, starting with That Hideous Strength. Jane's train ride to St. Anne's includes reverie as she passes through English countryside. It's something to thank God for. At the other end, we see the landscape literally rise up and bury alive one of the doers of wickedness (Devine, I think). Confer the Old Testament--the Psalms' evocations of the good earth expressing the delight of the Lord, and also the place where the earth opens up to swallow alive the traitors in the camp.