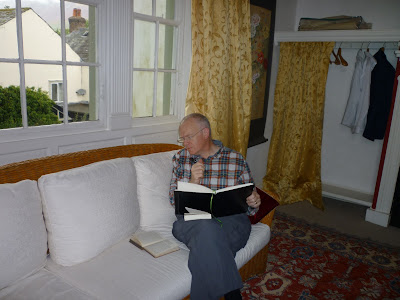 Our summer holidays this year included staying in Greta Hall, Keswick - which was the house inhabited by ST Coleridge in 1800-1803 together with his friend Robert Southey and their families (Southey spent the rest of his life there).

Above I am being pretending to be inspired by the spirit of Coleridge, by working in the room that was his study. Pretence aside, it is an inspiring room; and I spent several hours there, tackling Coleridge's main prose work Biographia Literaria (Biographical Sketches of My Literary Life and Opinions).

(This was an old Everyman edition bought cheaply a few days earlier from Bookcase in Carlisle, one of the great secondhand bookshops; an actual exemplar of Terry Pratchett's concept of 'L-Space'.)

But I have rather reluctantly concluded - after several months of intense effort - that Coleridge is 'not for me' in terms of the detail and specificity of his philosophy.

From Owen Barfield's wonderful book What Coleridge Thought, I recognised that Coleridge provided a philosophical solution to the primary problem of modernity; but I soon found the memory of this answer slipping away from me; and now - after four months, and despite continuing to struggle with Coleridge - it has altogether gone.

The problem is my inner resistance to the abstract, geometric-mathematical nature of the schema. I can grasp this when I am immersed in the work, but only in the way I grasp mathematical concepts - I don't feel it in my heart, I could not base my life on it - nor could I persuade anybody else of it.

Similarly, Coleridge's metaphysics of Christianity (focused on the mystery of the Trinity) is too abstract and paradoxical for me to find it moving, compelling, inspiring or encouraging.

In sum, Coleridge's ideas are ultimately incompatible with my primary metaphysical understanding of the nature of reality - which is why they keep slipping-away from me.

My conclusion is that Coleridge's solution to the problem of modernity is valid and works for some people such as Owen Barfield - but I will need to find my own philosophical way of understanding and articulating the way forward beyond alienation, nihilism and despair.

This will need to fit with my fundamental metaphysical beliefs; which are pluralist (in William James's sense); and based on the Mormon concept of the destined mortal human condition as a voluntary, incremental exaltation of each man or woman towards ever-fuller deity; including William Arkle's clarity that this process is an ever greater participation in a creation unified and essentially characterised by loving familial relationships.

In other words, as so often, I return to the master metaphor and concrete reality of God being our loving Father; and the human condition as one of (if we choose) developing, growing-up through experience and striving, over a vast timescale - eventually hoping to rise to the same level of being as our heavenly father, and able to know him in an adult (that is fully divine) way.
Posted by Bruce Charlton at Monday, September 05, 2016

To take this blog entry from the sublime to the ridiculous - do you ever read "Dirk Gently's Holistic Detective Agency" whilst in your Coleridge setting?

Although it sounds like Coleridge is difficult to understand and I may not like it, I'd like to give it a try. Could you please recommend a book that I could start with to understand his metaphysical beliefs?

What Coleridge Thought by Owen Barfield - but it isn't easy...