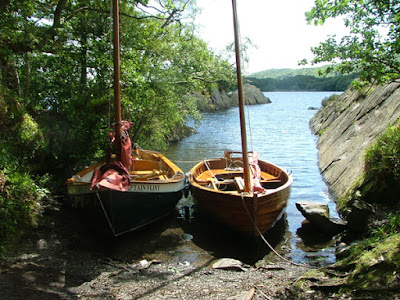 We watched the new Swallows and Amazons film in Keswick, where it was actually filmed in part (on Derwentwater); and the kind of Lake District area where Arthur Ransome's book was set. The omens seemed good, and the movie was clearly traditional in look and feel. But nonetheless, the whole family found the movie to be an unsatisfying experience.

For all its attention to detail - in terms of set, costumes and props - the structure of the script was incompetent - and in a way that affects many mainstream movies.

The problem in such a film is to create a child's world from the child's perspective; in which the business of sailing on a lake, camping and cooking, and the 'wars' between rival groups of children, are all genuine, gripping adventures.

(This is not really all that difficult because it is the truth - it is how things really are for real children. And many adults are pleased to remember the fact - only adolescents find this to be 'kid's stuff'.)

And in much of the early half of the movie this was done well.

But all this is destroyed by introducing genuine, adult perils and perspectives - international espionage, violence, assassins and guns (with even one the kid's handling a gun, and threatening to kill a baddie).

These aspects subvert and ruin the child's perspective by making their adventures look trivial/ escapist by comparison (they aren't really trivial at all, nor are they escapist - but that is how they are made to look).

Furthermore, the espionage elements in this movie are unconvincing - full of gross implausibilities, plot holes and ridiculous coincidences.

So what we have here is a potentially classic short childrens' film, ruined by the addition of an alien, lame and stupid adult (or teen) 'action movie' - rendering the whole exercise ultimately a waste of time and money and resources. Stupid, stupid, stupid!

The 1974 film version of Swallows and Amazons, by contrast, does the job properly. It is 'corny' but charming and good-hearted; and maintains the proper child's-eye-view throughout.


Note: I have never read the book of Swallows and Amazons, nor any other of Ransome's books, beyond a brief inspection - although I shall probably do so at some point, as they seem very good of their type.
Posted by Bruce Charlton at Sunday, September 04, 2016

You've hit the nail on the head about remakes today. We're not in a culturally richer era but the opposite and they just cannot reproduce the attitude people had then.

I haven't read the book or seen either adaptation, but I can think of one Hollywood film that may have gotten the child and adult perspective mix right. In E.T. the Extra-Terrestrial(1982) the two perspectives are clearly opposed to each other. And there is the poignant allusion to the inevitable transformation of child into adult when the head of the aggressive government team tells the boy, "I've been waiting for this [meeting an extra-terrestrial] since I was ten years old."

(Hmm. Opposed, yes, but come to think of it, they get whipped together a good deal in the body of the film. A mother in her Halloween costume behaves like a child; the boy calls his older brother a censorable name and gets no more than mild reproach from his mother; the boy kisses a girl while under the inadvertent mental influence of the ET as it watches a video of a romantic movie. It was the '80s, what more can I say? The unwise envy for and idealization of streetwise children that characterized the worldview of many adults then and now, kept--and keeps--creeping in.)

Adaptations! Maybe it takes genius to sit down, read something, and make a stage or film rendering that looks as though it welled up directly from the imagination rather than being cobbled together out of mass-cultural flotsam into a more or less recognizable facsimile of the original.

Even with its technical limitations, I enjoyed the Alan Seymour-Marilyn Fox 1988 adaptation of The Chronicles of Narnia. (But, oops! I haven't read the books yet!) I was in my thirties when it hit American television so I don't have the excuse that I was a child.

Maybe I'm a sucker for the Benjamin Britten-Peter Pears style of singing:

"Where the waaaaves run sweet, doubt nooOOOoot Reepicheep..." --- may have been the topping that made the dessert for me.

By the way, has anyone here heard of Simon's Law, named for its coiner, the critic John Ivan Simon? A great work in one medium will not translate well to another. So viewing a film rendering of Crime and Punishment, no matter how well-mounted, can only be a pale substitute for reading the novel. But a minor novel like Red Alert can be adapted into a very good film, like Doctor Strangelove.