A visit to (composer) Ed Williams in Bristol c1980 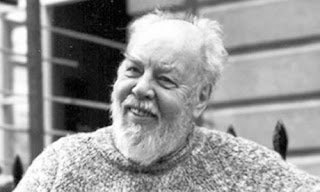 I once visited the studio of Ed Williams (1921-2013), who was a classical composer of modern music - a memorable and enjoyable experience.

He had just done the background score for David Attenborough's mega-hit documentary Life on Earth (which spawned a hundred imitators) and showed us how he had recorded orchestral musicians on a series of linked reel-to-reel tapes, and mixed the sounds in strange combinations.


I remember him as a genial, welcoming and fricndly character; apparently very absorbed in his work and keen to describe it. And his studio was an enviable work environment - just the kind of place I imagined I would have enjoyed spending creative days - full of exotic electronic and accoustic equipment, notebooks - and a corner with a kettle and some snacks.

The reason why this brief visit stuck in my memory was that deep down I yearned to be involved in some creative activity, rather than the practice of medicine for which I was being trained.

From later knowledge, I over-estimated the satisfactions of this kind of life; nonetheless it is not all that far from my current mode of thinking and writing (and teaching) - which does indeed suit me better than being a doctor.
Posted by Bruce Charlton at Wednesday, October 12, 2016