A (real) poem by Clive James 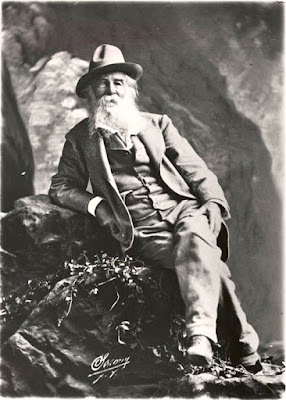 Van Wyck Brooks tells us Whitman in old age
Sat by a pond in nothing but his hat,
Crowding his final notebooks page by page
With names of trees, birds, bugs, and things like that.

The war could never break him, though he’d seen
Horrors in hospitals to chill the soul.
But now, preserved, the Union had turned mean:
Evangelizing greed was in control.

Good reason to despair, yet grief was purged
By tracing how creation reigned supreme.
A pupa cracked, a butterfly emerged:
America, still unfolding from its dream.

Sometimes he rose and waded in the pond,
Soothing his aching feet in the sweet mud.
A moth he knew, of which he had grown fond,
Perched on his hand as if to draw his blood.

But they were joined by what each couldn’t do,
The meeting point where great art comes to pass—
Whitman, who danced and sang but never flew,
The moth, which had not written “Leaves of Grass,”

Composed a picture of the interchange
Between the mind and all that it transcends
Yet must stay near. No, there was nothing strange
In how he put his hand out to make friends

With such a fragile creature, soft as dust.
Feeling the pond cool as the light grew dim,
He blessed new life, though it had only just
Arrived in time to see the end of him.


Note: Clive James has been a celeb in the UK for more than 40 years - being the first master of the devastatingly facetious weekly TV criticism (his columns from The Observer still raise a laugh at their aptness). He has spent most of his career being (I am sorry to say) annoying, pretentious, show-offish or inept. Nonetheless, credit where due, the above is a real poem - which is a rare thing, especially nowadays. The Frost-ian echoes are unmistakable, but there is also a different flavour and phrase which makes it memorable and authentic.