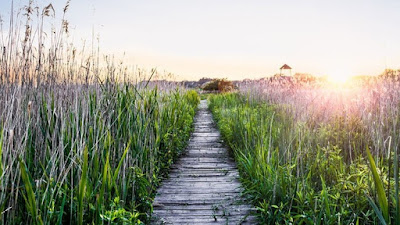 While it is an error of the first order to suppose that we can make a solid paradise around us during our earthly mortal life; it is also an error of similar magnitude to suppose we can do without an earthly utopia to aim at.

Lacking any reasonably clear and comprehensible notion of what kind of earthly mortal society we want, we become either short-termist/ expedient or demotivated/ suicidal.

My conviction is that none of the past utopias are viable - being either too unbelievable or else too uninspiring - therefore our future utopia must be imaginative.

For example; the 'Shire' like utopia of William Cobbett/ Distributism/ Small is Beautiful/ Self Sufficiency - I mean an agrarian society of free peasants (and no Lords), each with 'three acres and a cow' - has proven itself to be unviable and (in practice) unappealing... insufficiently motivating.

More exactly, it needs to be imagin-ative but not imagin-ary.

I think the creative thinkers, poets, artists and dreamers of the past have already told us what this imaginative utopia should be - in broad brush-strokes.

If we can identify empathically with the visionary mental landscapes of William Blake or Wordsworth, we can get some idea of the glorious scope and depth I am thinking of. Or, more exactly, there is the mindscape of Goethe or his amplifier Rudolf Steiner; or some of Jung's accounts of the Collective Unconscious - with its vivid myths and archetypes...

My contention is that all these are perspectives on the same thing, the same place; a real place - objective, universally accessible and of primary importance and yet/also a country 'of the mind'.

We need to develop that understanding - pioneered by ST Coleridge, and clarified by Owen Barfield - which recognises that we already live in a world co-constructed by our own imagination.

And we have the possibility of first becoming aware of this world of imagination - and dwelling in it; and then, ultimately - and this is the utopia - becoming an active participant in its creative processes.

Farming is hard. There's nothing wrong with hard but back breaking and heartbreaking are no kind of utopia. Even if you are farming on your own land and without encumbrance, is never ending.

I farmed as a boy and now after many years returned. It's not even a small is beautiful. It's worth it as a way to live but no utopia.

Living as my great grandfather did as a boy, following the herds and seasons on horseback might be but my grandfather said it was freezing cold in winter and they ate boiled leather. It's the spiritual element that is important. If you make it the centerpiece of any life you'll get close.

I don't think it is possible in a city. Just the statistics regarding people who live in cities tells me that they are harmful. Either they attract the damaged and dangerous or they make people that way.

Small tight communities, large families, and plenty of fresh air and eschewing the distractions unique to the internet age, (idleness, idolatry, pornography, perversion) brought to you instantly and effortlessly right in your own home. That might get many where they need to be.

My great grandmother was happy, surrounded by her children and grand children and a smiling wonderful light until she passed on at nearly a hundred. She was born in the age of rail and died when the space shuttle was a regular thing.

Sorry this is getting long and rambling.