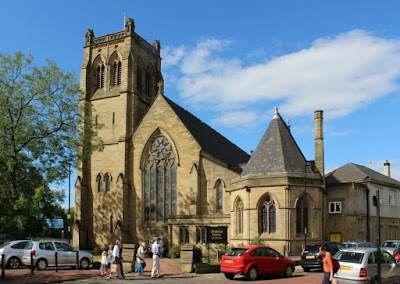 Last week, the church I am mainly associated-with, Jesmond Parish Church (JPC), hit the international mass media headlines for doing a good and brave thing. This is the church I most support, and where my family members have been attending services, and a variety of clubs and events, for the past decade.

What they did, was to have one of the senior priests ordained as a bishop, outside the normal Church of England channels.

Most of the Anglicans in the world are outside the Church of England - it is indeed the third largest Christian denomination after Roman and Orthodox Catholics - and JPC had Rev Jonathan Pryke made a bishop by another branch of the Anglican church from South Africa.

The significance of this act is that the Church of England (CoE) is an episcopal church - i.e. run by bishops, who ordain priests. But the CoE has become taken over by Leftists (aka 'Liberal' Christians), who are engaged in incrementally eradicating real Christians; and converting the organisation into a Christian-tinged Leftist political pressure group.

Liberalisation/ corruption of the CoE has been done mostly top-down; by controlling who was appointed bishops. This involved excluding 'conservatives' - i.e. theologically serious Anglo Catholics and conservative evangelicals such as the clergy of JPC: essentially everyone who disagrees with the sexual revolution is excluded.

And because bishops control the ordination of priests, this has corrupted the training colleges; and because bishops appoint priests to CoE churches this has been used to destroy conservative churches whenever their Vicars or Rectors come-up for replacement (when they retire or move-on). In other words, the CoE is being systematically purged of real Christians.

The JPC action is the first step in creating alternative arrangements for the besieged Christians who remain in the Church of England - presumably Jonathan Pryke will be the first of several 'conservative' bishops who can ordain new priests, validate new training arrangements, perform confirmations and organise missionary work within Britain.

In some ways it is a small step - but in terms of the CoE this is a big deal - opening possibilities of all kinds of sanctions (official and unofficial); most importantly this is the first proactive counter-strike by UK Anglican conservatives, who have been used-to decade after decade of defeats and retreats.

I can take zero credit for this; but I am delighted that this bold step was taken by 'my' church!


More information on the legal and political ramifications can be found at Gavin Ashenden's blog:
ashenden.org

Marvelous, here in America the main church body for episcopalians would seize the church building and kick the congregation out.

I always thought it bizarre, you can be wobbly on the deity of Christ (and any one of the 39 articles really) but you had better be dead certain on sodomy not being a sin to stay in good standing.

By contrast, Communism (that atheist totalitarian ideology which has suppressed and exterminated Christians wherever it got power, and also slaughtered c 100 million people and rising) is not merely tolerated, but has for decades been approved-of.

I recall a sermon I attended in Durham Cathedral, from David Jenkins the Bishop of Durham - Durham being number three in the CoE hierarchy after Canterbury and York, thirty years ago; expressing nothing but positivity for Marxism.

Jenkins denied the reality of the virgin birth and the resurrection of Jesus - so politics has been pushing-out Christianity from the CoE for a long time already.

There is a huge amount of ground to make up - and the real Christains are in such a small minority among the CoE leadership that turning-around the organisation seems inconceivable.

However the conservative Anglican churches are growing, whereas the remainder of the CoE is collapsing at an accelerating rate; so the situation is not utterly hopeless; so long as the conservatives can obtain sufficient institutional autonomy - and that means *bishops*, first and foremost.