The triumph of William Arkle 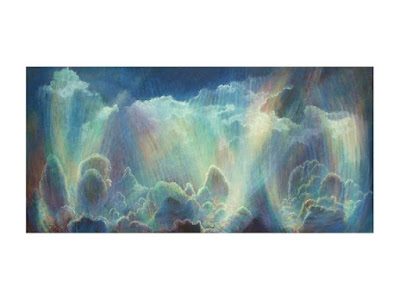 I was musing on the Owen Barfieldian theme that mankind has not yet passed from spiritual childhood (Original Participation) to adulthood (Final Participation); but remains arrested in an adolescence that was intended (by divine destiny) to be merely transitional.

And I was trying to think of anyone who seems personally to have made this transition; to have moved into spiritual adulthood and Final Participation - and I could think of no one more-completely successful than William Arkle; a man who consistently writes-from that FP perspective of daily awareness of universal livingness, consciousness, meaning and purpose.

Of course, I don't know how much of Arkle's daily living was spent in this mode of thought - and because it is a subjective state this is anyway very difficult to determine. Still, Arkle was the most plausible candidate I could come-up with - other candidates included William Blake, Goethe, Rudolf Steiner and Owen Barfield himself; but Arkle comes-across in his writings (and paintings) as more of an advanced practical and fully-self-aware mystic than any of these.

Regular readers will know that I have been blogging about William Arkle for about three and a half years, since the death of Colin Wilson reminded me of his work. I later set-up a blog to post this material - this is my introduction:

I was surprised yesterday, on reviewing the blog statistics for the first time in a good while, to discover that it had received 48,000 Hits; which is about 1000 a month on average. This was pleasing - especially given that the main Arkle web resource (billarkle.co.uk) has seemingly been 'down' for maintenance/ improvement for about a year (although much of it can still be accessed via The Wayback Machine).

The fact is that, although apparently quite a few people have looked at my blog, William Arkle remains almost-wholly obscure. Nonetheless, after three-plus years of intense and close-reading; I would regard him as one of the deepest and truest writers on spiritual Christianity I have ever encountered.

Just over the past couple of weeks I have been working on some liner notes for a forthcoming CD of William Arkle's music, as orchestrated and performed by Robert John Godfrey and The Enid (a progressive rock band which began in the 1970s, and which also used an Arkle painting for one of its albums); a copy of which I will post later.

But in the meantime, somebody has posted on YouTube a sample of this music, which is well worth a listen. Composed before 1968, it was a precursor of what would now be called 'ambient', and somewhat in the genre of minimalism - but I would describe it sounding rather like as Brian Eno meets Frederick Delius! If you enjoy it, you might look-out for my notice of the full CD album:

This is such happy news. One of the most significant things to come out of my discovering your blog a few years ago was being introduced to Mr. Arkle, of whom I had never heard before reading of him here. This selection of music suits me right down to the ground; I cannot bear discordant, atonal "music," and to learn that something so lovely will soon be available...again, such happy news! Thank you so much.