Prophecy comes-into the stream of primary thinking - and its expression should be in that context; which implies that the expression of prophecy intends to recreate the stream of thinking including intuitive and prophetic insights. Thinking and noting occur together; prophecy is creation in real-time - and perfectly consciously (no unconscious speaking or automatic writing here and now, however matters were in past eras...) The result may be, probably will be, first-draft, instantaneously recorded, and unexplained.


English people are unaware of their positive values, explicitly those which hold Albion together - they are, indeed, unaware of what is Albion; of our bounds and content.

These were made by past genius - and not by known work, but ultimately by the thinking of past genius; these discovered, remade, added to the soul of Albion.

William Blake wrote poems, such as Jerusalem - which is widely known and sung; he painted and illustrated, composed lyric poems, aphorisms, and vast prophetic verses... But Blake's true role in Albion was to remake the nation at so deep (or high) a level that it is beyond perception; and not fully-knowable as a communication.

The principle act of Blake was his direct knowledge of reality, and then his shaping of reality... The reality of God's creation; that reality which can be known directly by you, or by me, or by anybody (now, or in the future). This is the imperishable legacy of Blake - and there were other as well as Blake (Langland, Chaucer, Shakespeare, Milton...).

So Blake's poem Jerusalem (to take an example) is true - when it was conceived it became true because it was written-into creation; that is the nature of prophecy.

For you and I to talk or write or read about creation involves us in indirectness, in symbolism, in 'communication'. But we can understand each other when both of us stand-before the poem Jerusalem as it is written into creation.

(Everything else is indirect and second-order; to contemplate creation alone is primary, sure; because direct.)

**
And did those feet in ancient time,
Walk upon England's mountains green:
And was the holy Lamb of God,
On England's pleasant pastures seen?
And did the Countenance Divine,
Shine forth upon our clouded hills?
And was Jerusalem builded here,
Among these dark Satanic Mills?

Bring me my Bow of burning gold;
Bring me my Arrows of desire;
Bring me my Spear: O clouds unfold;
Bring me my Chariot of fire.
I will not cease from Mental Fight,
Nor shall my Sword sleep in my hand:
Till we have built Jerusalem,
In England's green and pleasant Land. 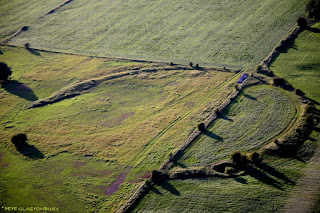 Priddy in Somerset; a green, cloudy, hilly place that the young Jesus is supposed to have visited in ancient time,
with his uncle Joseph (of Arimathea)

I like listening to music I find inspirational. Not music that has been intentionally composed with a particular message in mind, but music that inspires a state of connection with beauty and truth because the music was composed to be beautiful.

I believe that music and song, and verbalizations and other compositional activities (including "automatic writing" but not excluding other graphical arts) can serve to transmit truths that are not fully explicable to the initial composer. Music and the other arts inherit influences from previous works, and the filtering and refinement of a theme or image over a thousand such generations might not be too much to discover some fundamental insight that was implicit but undiscoverable in the first sketch.

We are still receiving those original inspirations directly to our minds at times, and still interpreting the inspirational symbolism of classic artworks, and still refining by unconscious processes the transmission of what is essentially true and beautiful in our fresh contributions to the tradition of art (which modernism has attempted, but ultimately failed, to break).

Agreed - but it clearly Is Not Enough.

"So Blake's poem Jerusalem (to take an example) is true - when it was conceived it became true because it was written-into creation; that is the nature of prophecy."

Very well put. Reading this was a sort of breakthrough for me. Yes, I think that has to be the nature of prophecy (as opposed to mere precognition), although obviously it raises a lot of questions. (For example, how did Blake's assertions about Jesus' activities in the past become true when he conceived them? A broadly Dunnean model of time is necessary to make sense of such a thing.) Anyway, you've given me something to chew on, a starting-point for meditation.

I was immediately reminded of this "memorable fancy" from The Marriage of Heaven and Hell, which I'm sure you're already familiar with because you've quoted it in part in another post.

"The Prophets Isaiah and Ezekiel dined with me, and I asked them how they dared so roundly to assert that God spoke to them; and whether they did not think at the time that they would be misunderstood, and so be the cause of imposition.

"Isaiah answer'd: 'I saw no God, nor heard any, in a finite organical perception; but my senses discover'd the infinite in everything, and as I was then persuaded, and remain confirm'd, that the voice of honest indignation is the voice of God, I cared not for consequences, but wrote.'

"Then I asked: 'Does a firm persuasion that a thing is so, make it so?'

"He replied: 'All Poets believe that it does, and in ages of imagination this firm persuasion removed mountains; but many are not capable of a firm persuasion of anything.'"

My assumption is that the retrospective part of Blake's prophecy was 'already' true - and he knew it by 'observation' of reality; it was the future aspects that were inscribed upon creation. I don't think this means they *must* happen, but more that the tendency is built-in structurally, although the prophecy could be 'overlaid' by later decisions (usually with malign consequences).

In general, I believe that during the era Blake was active - late 18th and early 19th centuries, there was an awareness of the destined future of Western Man which was directly known in common, but variously expressed - sometimes with significant error or distortion, by The Romantics.

The proper destiny was a matter for individuals, was to be conscious and active. The distortion was for the destiny to be appropriated by institutions and ideologies (groupish), to be sought in unconscious and instinctive sources (trances, drugs, nature), and to be done passively or obediently (totalitarianism of the various types).

We have come a very long way from the original Romantic insight, and its nature has been falsely represented in modern history (for example, Blake is usually depicted as a kind of pagan free-love trippy hippy).

[Note: I got this mainly from Barfield, who partly got it from Steiner - however although Steiner personally reached a proper solution, he became corrupted (IMHO) and Steiner's later work (post 1900) and subsequently his legacy has been counterproductive (falling into scholasticism, legalism and bureaucracy)]

This destiny was actively countered by supernatural and human will, and as-it-were buried, ignored, distracted-from... and that situation has continued and amplified.

Indeed, I *know of* only a handful of people in the entire world who are (in my judgement) correctly aware of the nature of our problem and the necessary direction of solution.