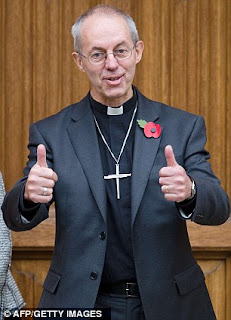 I notice that it is now more than four years since Justin Welby was enthroned as Archbishop of Canterbury and 'leader' of the Anglican communion - which is the third biggest denomination of the largest religion in the world.

Throughout this time I have often commented on the chap - the collection of posts can be viewed via this link - and I thought, in particular, it was interesting to re-post one of my earliest evaluations - from 22 March 2013 - to see how well I was able to predict what was to come...

Much is made, by the media, of the supposed fact that Justin Welby - the Archbishop of Canterbury who was enthroned yesterday - is an 'evangelical'.

But, what does this really mean?

For example, what does it mean in contrast with his predecessor, Rowan Williams?

Well, both are Leftist bureaucrats first and foremost - but Williams was like a university administrator while Welby is more of a health service manager.

Furthermore, Williams was so hostile to Christianity that he would avoid talking about it altogether, if possible.

But Welby, being an 'evangelical' is quite happy to mention Christian themes from time to time - woven into his socialist propaganda.

For more than a thousand years this country has to one degree or another sought to recognise that Jesus is the Son of God; by the ordering of its society, by its laws, by its sense of community. Sometimes we have done better, sometimes worse. When we do better we make space for our own courage to be liberated, for God to act among us and for human beings to flourish. Slaves were freed, Factory Acts passed, and the NHS and social care established through Christ-liberated courage. The present challenges of environment and economy, of human development and global poverty, can only be faced with extraordinary courage.

You see? The primary achievements of Christianity in 2000 years have been Abolition, Health and Safety, the health service bureaucracy and dole for most of the population.

The future of Christianity is fighting Global Warming, Fair Trade and making-Africans-smile.

What extraordinary 'courage' and liberation it takes for JW to articulate such counter-cultural sentiments!... Not.

Yet at the same time the church transforms society when it takes the risks of renewal in prayer, of reconciliation and of confident declaration of the good news of Jesus Christ. In England alone the churches together run innumerable food banks, shelter the homeless, educate a million children, offer debt counselling, comfort the bereaved, and far, far more. All this comes from heeding the call of Jesus Christ. Internationally, churches run refugee camps, mediate civil wars, organise elections, set up hospitals. All of it happens because of heeding the call to go to Jesus through the storms and across the waves.

What is Welby's Church of England, anyway?

Well, apparently it is a really important part of the welfare state. It provides food banks (but I thought the poor were dying of obesity?); shelters the 'homeless' (to be 'homeless' is an official category which does not preclude someone having a 'shelter' such as a house or caravan - indeed being one of the thousands of 'homeless' selling the The Big Issue magazine is such an attractive job that it is hotly competed-for and has attracted Roma from a thousand miles distant to become 'homeless' in Britain); it educates millions - just like local governments; it provides financial advice (!).. and so on and drearily-on.

What is good about the C of E, apparently, is that it is almost as useful as the municipal council.

So at the end of this litany of socialist triumphs, we perceive that the C of E is 'transforming' society in exactly the same direction and by exactly the same means as Leftists everywhere - it is part of the precisely same project as the United Nations, Western governments, the civil service, the NGOs...

But all of these are aggressively atheist - so how come Welby is arguing that All of it happens because of heeding the call to go to Jesus?

And why does Welby suppose it requires the CoE to go through storms and across waves to do this kind of stuff, when all he is asking the church to do is to float along with the mainstream current of secular Leftism?

The theme of the sermon is 'courage' and 'be not afraid'; but none of this stuff requires courage - rather, it is precisely what The Politically-Correct Establishment propagandizes, rewards, enforces.

What really would take courage, but what Welby of course never mentions, is to use his enthronement speech to make a clear Christian statement of opposition to the sexual revolution.

It is the opponents of bureaucratic Leftism and the sexual revolution who need to be told: be not afraid; because they are the ones who are afraid (and with good reason).

There is every possible reason for optimism about the future of Christian faith in our world and in this country. Optimism does not come from us, but because to us and to all people Jesus comes and says “Take heart, it is I, do not be afraid”. We are called to step out of the comfort of our own traditions and places, and go into the waves, reaching for the hand of Christ. Let us provoke each other to heed the call of Christ, to be clear in our declaration of Christ, committed in prayer to Christ, and we will see a world transformed.

(He means, of course, a world 'transformed' into a socialist utopia.)

But does this man know anything about the state of Christianity in 'this country', this England? If so how could he be optimistic?

Does this man understand words? Does he know the meaning of 'optimism'? Or does he think optimism means the same as 'hope'?

If he does not understand the word he is an ignorant fool, and if he does understand it but misuses it then he is a liar - or perhaps insane. 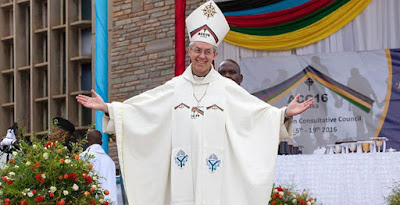 "So, because you are lukewarm, and neither hot nor cold, I will spit you out of my mouth."

"Many will say to me in that day, Lord, Lord, have we not prophesied in thy name? and in thy name have cast out devils? and in thy name done many wonderful works? And then will I profess unto them, I never knew you: depart from me, ye that work iniquity."

Is there any way we can help you become the next Archbishop of Canterbury?

@ Andrew - I think it would be necessary to become a priestess first; and I don't fancy that...