Herding cats? - individual evaluation and agency is the only proper opposition to totalitarianism 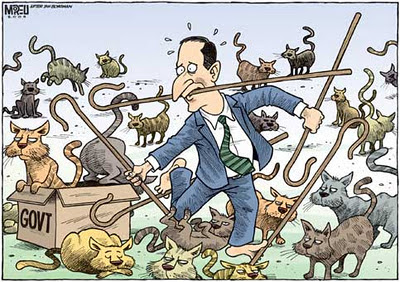 If Romantic Christians want to oppose totalitarianism, there is a temptation to 'organise', to create an oppositional 'army' (an 'army of liberation'); but - even if it were possible, which it is not - that would essentially be the Boromir Strategy - Hey lads, let's use the One Ring to fight Sauron!

Because the core problem is The System, and organisation involves creating a Sub-System with The System - using System features such as money, laws, media etc - then attempting to use this Sub-System to destroy The System.

It never works because it can't work.


This was brought to mind on this day when UK people are having an election for MEPs, i.e. members of the European Parliament - and there is a chance to register a vote in favour of Brexit. A Brexit 'party' (a Sub-System of The System) has been created, plus a couple of other Brexit possibilities. So this is a protest election, therefore a chance for each individual vote to be 'make a difference', perhaps?

But to make a political party, to support a party, to join an election, to vote is to participate in The System; is to become complicit - and to become a part of the controlled-opposition (spiritually to join oneself with Emmanuel Goldstein, who is The System's manufactured-fake enemy). To vote is the Boromir Strategy...


If not, then what? If I suggest that organising, voting, participating-in The System is actually making-things-worse - then what should people do instead?

('Instead', since whatever we have-been doing is clearly ineffective.)

Instead, we should beach of us become really and truly self-motivated self-evaluators, agents who thinf for our-selves, from our freedom - who believe not what we are told but what we know from personal experience understood by direct intuition, who think not as we are told but as what arises from-with; be individuals whose behaviours can neither be predicted nor manipulated en-masse.

We should behave like cats; and cats cannot be herded.


Thirty-plus years ago - government Health Service policy broke ineffectually over the barrier of General Practitioners - Family Physicians - because each was an independent agent, and spiritually each was stubbornly independent (for better and for worse - but independent).

I worked in the NHS bureaucracy for a couple of years, and the government officials often complained that that trying to control General Practice by changing policies and rules was like herding cats - their exact words - in other words it could not be done, because GPs were not predictable in their behaviour; under the same policy, each was likely to go off in his own direction, without regard for the group.

It did not much matter what you did to one GP, because most of the others regarded themselves as living in a different world. In practice, The System either had specifically to control each GP as ?50,000 separate units; or else there would not be much control.

That was then, this is now> Now there is a massive system of detailed (patient by patient) online surveillance and monitoring, a single imposed-contract for all, and the work and payments is broken up into multiple separate (monitored) units; and GPs are increasingly organised in increasingly-large groups. The GP is de facto (when not in practice) an employee of The System.

British GPs are no longer cats but instead sheep - or, increasingly, archetypal-movie-lemmings; who were, in reality, being herded off cliffs by unseen Disney technicians...

(An exact analogy for Western Man with respect to the Global Establishment.)


And what applies to GPs in microcosm applies to Western Man. This is what it is to live under a totalitarian system - no longer to be an agent, not to have one's own unique motivation, to be monitored and manipulated in large, impersonal units, by bureaucratic systems of rules, incentives and punishments.

We need to become cats, cease being lemmings. 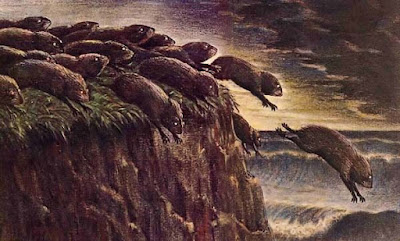 I heard a Muslim man once say "the cat is aware of the existence of God, the dog think that humans are God"!

I think he had a point. Perhaps this is why western cities crawl with strolling dog owners.

A dog thinks: The man provides me with food and shelter - he must be a god.

A cat thinks: The man provides me with food and shelter - I must be a god.

I like the cat/lemming metaphor you used here very much. Once in a while, I feel a faint urge to "fight the power" (it's the Hungarian in me - we are a notoriously reactionary and rebellious bunch), but I know how pointless and counterproductive it would be, for the exact reasons you mention in this post.

Much of what we see in the media, politics, education, and increasingly at work/HR departments is purposefully manipulative - meant to provoke, instigate, and agitate.

If we give into these temptation and react, we cease being subjects and become objects. In other words, we cease thinking and acting from our true selves and are thought and acted upon by others.

You are completely correct in your assessment, in my humble opinion.

@Francis - I *try* (not always successfully) to infer what They are trying to get me to do... Currently, I think They want pro-Brexit people 1. pateintly, repeatedly to rely on voting to get what they want; and 2. to organise so that they can be located, fought (or corrupted) and destroyed. What they most fear is a mass of individuals disengaging and each forming a single-person 'cell' of flexible, indomitable resistance.

There’s a fascinating book called “Natural Born Heroes” which features the Cretan resistance to German invasion during the Second World War. What is fascinating is the independent nature of the resistance and the degree to which Cretans embarrassed some of the most elite German military units. Without being told the Cretans instinctively fought tooth and nail, unlike nearly every other country invaded by the Germans. No or little formal organization, everyone from monks to elderly men saw German paratroopers and just started shooting and stabbing them. What was supposed to be a walk over a frightened and cowed population and a few British units in transit with overwhelming coordinated force became an extremely hard bitten struggle. The Germans of course prevailed through sheer quantity eventually but it was internally considered a failure.it cost them time, men, and material they hadn’t planned on and Crete tied up more soldiers than it was ever supposed to for the duration,

The author didn’t emphasize the point, being secular, but I saw the hand of faith in the people as well. Priest, monks, and bishops were not ashamed to fight and to encourage their parishioners to do so. Interestingly enough, not every Greek locale was like this, Crete in particular was special.

I think it is possible to “organize” but emphatically NOT as the world system organizes. It is a paradox, an organization of free men. But the men have to be personally, internally free first. It is more like each man following God and then God coordinates you all.

"Quiet, anonymous, and often complicitous, lawbreaking and disobedience may well be the historically preferred mode of political action for peasant and subaltern classes, for whom open defiance is too dangerous... One need not have an actual conspiracy to achieve the practical effects of a conspiracy. More regimes have been brought, piecemeal, to their knees by what was once called “Irish Democracy" -- the silent, dogged resistance, withdrawal, and truculence of millions of ordinary people -- than by revolutionary vanguards or rioting mobs." -James Scott

I predict that all problems the West faces will be addressed by passing laws that are widely ignored, and by printing more money. When that money's value drops to zero, all "democratic" governments will dissolve in rapid succession, and power will disperse into the hands of local warlords. To hold and expand their territories, these warlords will need something more compelling than modern progressive liberalism to motivate their troops, and they'll find it on the alt-right. They will call the new ideology "Christianity" and everything else "Satan-worship" or "Jew-"something.

@Michael - In this is is important to recognise a distinction between formal institutional organisation (Gesselschaft) and the affective alliance based on 'love' (Gemeinschaft)- examples of which are the family, and (albeit temporarily) strong friendship groups such as The Inklings.

But we need to be careful not to take military examples as primary - the primary examples ought to be spiritual, not physical. The necessity is for spiritual autonomy - which is possible even for slaves and prisoners.

@Dave - I don't think that will happen - or if it does it will not be stable, will be a short pahse, and will collapse further. I used to think something similar, when I wrote Thought Prison in 2010-11; but now I believe that modern people have changed, such that no kind of reversion is possible. Moderns think differently, have a different consciousness - making an agrarian society impossible to sustain (because people won't want it, and won't be able to run it). It is possible that about 6 billion people will die (many by suicide) over a few decades, and hunter gatherer conditions re-emerge. But whatever happens, it will be unprecedented - not a reversion.

A 6 billion person die off in a few decades cannot be what God intends for His Creation. Ergo, He won't let it happen. If a restart were necessary He would take it into His own hands (ie. the Flood). If a restart were imminent, He would warn us through His prophets (ie. Noah).

Half the population of England died in a generation in the late 14th century from the Black Death - an age of faith.

eligion protects from manipulation. Beyond that, I don't see what can be done. Frankly, most people cannot think for themselves. The Bible sometimes uses sheep as a metaphor for men. I believe this is an accurate metaphor. Most people are sheep and need to be led - by men of faith.

What do mean that we should be individuals whose behaviour cannot be predicted? Generally, it is clear what a Christian should do in a given situation, what would be the right thing to do. Thus the behaviour of a Christian can (usually) be predicted. What is wrong with that?

I'm not sure what you mean that we should not believe what we are told. There is a commandment not to bear false witness. Therefore I am usally inclined to believe what I am told by a Christian (if he tells me something that he has personally observed). For the same reason I am usually disinclined to be believe a non-Christian and generally assume that he'll tell me anything to manipulate me.

@Karl - Too many questions! You'll need to read elsewhere in this blog - do word searches to find what interests you.