The Argument from Desire: could Jesus be 'found' purely from meditation, without external knowledge? 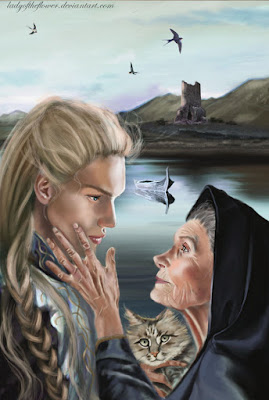 Finrod and Andreth illustrated by SaMo

Could Jesus be 'found' purely from meditation, without external knowledge?

I tend to think that this 'must' be the case; in that I find it hard to imagine that God would have placed his children on earth in a situation where their salvation depended wholly upon 'other people' providing them with specific information on the identity and role of Jesus.

Conversely, it would seem almost certain that our loving Father wouldn't have failed to provide ways in which each person individually could come to know what he must know; whatever his individual circumstances.

The most obvious way that we might learn about Jesus is after our mortal death; when we could be told and shown what we need in order to choose the gift of resurrection and life eternal: post-morten direct revelation. And I am confident that something of that sort must happen.

However, without some preparation in mortal life, and in a situation when (for us, here and now) mortal life is likely to poison our minds against Jesus - in which moral inversion is a mainstream fact of life, post-mortem direct revelation may seem to be insufficient. Our mortal habits may be deeply ingrained, and evil choices more likely.

But how - even in principle - might an individual plausibly comes to knowledge of Jesus without any external source of information, or (more likely, perhaps) despite an abundance of false information about the nature and teachings of Jesus?


I believe there is a way; and that it is the Argument from Desire - which was often articulated by CS Lewis, and seems to have been shared by his great friend JRR Tolkien.

The AfD says that when humans profoundly and spontaneously desire something not of this world, the experience suggests the reality of another world; a yearning for that which 'nature' cannot supply suggests its super-natural existence.

An example is given by Tolkien in his story ‘Athrabeth Finrod ah Andreth’, translated as ‘The Debate of Finrod and Andreth’ and published in Morgoth's Ring, Volume 10 of the History of Middle Earth, edited by Christopher Tolkien. The subject is death, and the debate is over whether the fear of death is an indication that the world has been marred by Morgoth, or (and this is the argument from desire) whether it suggests that death is not inevitable, and that Man is destined for immortality.

Since immortality is not possible in this world, then the universal fear of death (and perhaps the sense that death, when understood as the absolute end of the soul, is unnatural) can be taken as a kind of 'evidence' that in fact Man is, or can be, immortal in another world (i.e. a world beyond death).

Whether you personally find the Argument from Desire to be powerful is - presumably - a matter of disposition or habit. Like Lewis and Tolkien, I do find it powerful - and potentially decisive.


My intuitive feeling is that when - over a long period of time when I am thinking 'at my best' - my desire recurs to some-thing; that that thing represents a reality. It is probably not a literal reality in the exact way I formulate it; but I have the conviction that the reality of what I yearn-for, is an actual (and potentially attainable) reality.

On that basis, I think it perfectly possible that a person utterly ignorant of Jesus, or a Person who has learned nothing but falsehoods about Jesus, could - from the nature of his own deepest desires - come to know the truth about Jesus: who he was, what he gave us.

I don't think this would happen to everybody, because not-everybody wants what Jesus offers us; but it could certainly happen for some people. Those of us who deeply and spontaneously want resurrected, divine, creative, life eternal; in the divine presence and among other souls who want the same, some of whom we love in mortal life...

Well, those of us who want that reality which underlies this experience of desire, may well believe that satisfaction of this desire has-been made possible to us-personally, by the divine person of 'Jesus' - even without knowing his name, or anything else about him.

Dr.Charlton, just a note:
I think you are a bit too materialistic in your assertion that - baring internal revelation - one is 'dependent upon other people' for his knowledge of God.

Even other people are under the control of God; so if He needs you to have some knowledge, He can either place it directly into your mind, or cause other people to give it to you. It is really the same, both ways are directly caused by God, so you are not 'dependent upon other people' either way.

@LC - That mostly just kicks the can. But I certainly agree that there are surely likely to be *several* ways that a person can be informed about Jesus. That would make sense.

Another is discernment - perhaps 1% of the information about Jesus is true - but how would someone know that from the bulk of errors, lies and distortions? The answer could only be divinely implanted, intrinsically-valid discernment - which I also believe is a factor.

You are answering questions and comments before I even post them Bruce! This is what I needed today...

@David - This is an argument that just works for me. Not in the short term, but over the years. When I discovered that it worked for Lewis and Tolkien, it gave me more confidence to 'go for it' - the 'Marring of men' essay I cite above was written as I was on the cusp of declaring myself a Christian; it was a deep and private reason why, whereas the more objective reasosn were the ones I more often spoke about.

Also, I have not been so clear about 'what Jesus did' as I am now, since reading the Fourth Gospel so intensely. It is interesting that that Gospel is so simple in its essence that it made me realise that - ultimately - scripture is not required to inform us what Jesus did. The importance is that he did it, lives now, and so he is able to lead us through death to eternal life.

What the Tolkien story gets across so powerfully is the unnatural horror of a mortal life terminated by death - and our conviction that there must be more. And must means must!

Thanks for posting this Dr. Charlton.

It's something that has popped up for several years in my mind, but I was never able to come to a conclusion as to how it would be possible. I agree 100% with you, and it seems necessary and evident, that a man (even in isolation) should be able to somehow come to the Truth about God.

Your argument-from-desire is a good answer. I have personally experienced that sense of "this isn't right" and "there must be something better" many years ago, and perhaps even an occasional heroic impulse - but I lacked the personal inner strength/faith to go as far as Puddleglum in this regard and instead turned down the wrong path.

BC: "Another is discernment - perhaps 1% of the information about Jesus is true - but how would someone know that from the bulk of errors, lies and distortions? The answer could only be divinely implanted, intrinsically-valid discernment"

This is precisely the Sufi position. The fundamental problem is that it is impossible to distinguish between experts and charlatans unless one is oneself an expert. Given the huge amount of spiritual disinformation and corruption out there, the odds of getting "lucky" and choosing the right teacher are very low. The way out is that there is something divine within ourselves that *knows*, and guides us towards the right people.

"Also, I have not been so clear about 'what Jesus did' as I am now, since reading the Fourth Gospel so intensely. It is interesting that that Gospel is so simple in its essence that it made me realise that - ultimately - scripture is not required to inform us what Jesus did. The importance is that he did it, lives now, and so he is able to lead us through death to eternal life. "

That is a great insight. I've often wondered why the Gospels were so sparse in personal details - "what a regret, how wonderful it could be to know exactly what happened and all the details of his life" - but certainly there's a reason it is as such, and God foresaw the numerous errors that would have certainly lead people to. The importance is in Easter and not an explicit and detailed "reality show" of Jesus' life.

It is good that Christianity has been accepting of so many different forms of living - being a monastic isn't an ideal for all, it is not a failure in life to not be a Priest, nor is it a failure to not live a married life for everyone. Your blog has helped me what it means to have a "personal" relationship with God, that He sees us as children, each with our own different talents, etc. and He doesn't expect us to live a scripted or robotic life - but instead grow and be with us as different children.

This made me think of the Irina Ratushinskaya story.

@Andrew - Yes, you add the point that the decision of what to do-about the knowledge will be ours... we are presented-with the choice. That's important.