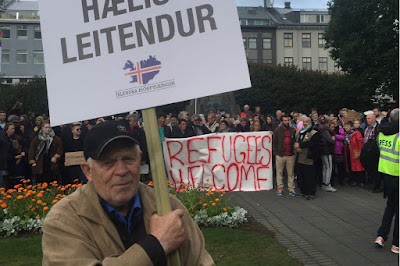 I went to Iceland 20 years ago, and became fascinated by the place such that I read about 40 books and read the online Iceland Review for a couple of years.

It seemed an unique place - almost every person was descended from the Viking settlement, almost everybody was related to everybody else and knew the exact degree of their relatedness. They have their unique language and a great literature - even in the 1990s the sagas were still a matter of everyday discussion. The population was about 270,000 and it was like a single extended family. It seemed to me that the future of Iceland's culture was assured, and that Icelanders would surely look after themselves - why not?

Well, it hasn't happened, Iceland has gone the way of everywhere else - just as bad as if they had been in the European Union. Their fertility rate is below replacement levels, yet the population has been bloated by the nations first significant immigration for hundreds of years - coming from all over the place - new arrivals will soon amount to 15% of the population. The population of this little island has increased by a staggering 25-30 percent - entirely from recent migrants.

Thus Iceland refutes nationalism. There couldn't be anywhere in the developed world that was more strongly nationalist than Iceland 20 years ago, that was more conducive to nationalism, and that had more cohesion. Iceland was among the wealthiest countries in the world, per capita; and had every imaginable reason to remain distinct and separate.

None of that made any difference whatsoever - Iceland are exactly as bad as everywhere else. Ergo Nationalism Is Useless. It's a waste of time. Forget it.

We will incrementally destroy ourselves unless we get religion, and the getting of religion must come first - because you couldn't get a more deep-rooted, biologically and culturally-based nationalism than Iceland - and it made No Difference At All.

I see no reason to conclude that nationalism is useless. Merely that it is useless without religion.

I doubt that religion without nationalism could save Island. It would certainly lead to above replacement fertility, but that might not be enough to prevent distructive migration.

You say religion is the answer but I cannot find anything but Christians, "Christians"?, who welcome the same.

The problem I am having with the religion hypothesis is I can't see this connection in the world.

If it were true I would expect to go to a church and find some evidence but it's the same old leftist beliefs in the church.

@Karl - My point is that nationalism is useless as things stand - and it seems you agree.

FX - You will never find any evidence while your assumptions exclude religion.

Maybe Iceland can return to their pagan roots of elves and gnomes. Actually I would gather more Icelanders believe in these than in God. So it is not that religion is going away, it is just getting more flamboyant and dumber.

A counterpoint: What about Japan? Japan is not very religious (and certainly not very Christian), yet has let in almost zero immigrants.

Don't know enough about Iceland to determine if nationalism was even a thing there really. Or was it simply no one wanted to settle there? The name itself does not strike me as that inviting to most people. Also, could be they just got infected with the diversity virus as everybody else, just later. Still I am not sure it proves nationalism useless any more than one idiot Asian proves Asians have low IQ. What it likely proves more than anything is the EU's reach is ubiquitous.

FX, in the modern West, the only groups with above-replacement fertility are a handful of conservative religious groups.

@ted - Seriously? It's easy to say, but it never happens - and those few who do claim to be neo-pagan nowadays have the same sub-replacement fertility as the secular and behave like normal materialist leftists (New Agers).

@Otto - Japan has the oldest population in the history of the world - and are at about half replacement rate reproduction.

@c matt - "Don't know enough about Iceland to determine if nationalism was even a thing there really." In that case, you would have to find out about Iceland for yourself, before you could be convinced by evidence on the subject.

Finland was quite nationalist in the 1980's when I grew up and there was even a resurgence of nationalism after the fall of the Soviet Union when we could freely commemorate the veterans of World War II. We had a great story in the Winter War of (almost) defeating the Soviet Union by ourselves, Kalevala was read in schools etc. This made little difference in the 1990's, when Finland joined the EU and began receiving immigrants.

I think the most important factors in this change were the colonization of minds by the English-language media and the wish of the elites to join the global elite. The EU is more a consequence than a cause.

Because everybody else is materialistically motivated, even the nationalists nowadays, there is no effective opposition to those that are ideologically motivated, the active nihilists, who have a bureaucratic program of destroying everything.

Bruce, I think you took me too literally. I was trying to be sarcastic about this.

@M - "The EU is more a consequence than a cause. " Agreed. But leaving the EU would certainly be a step in the right direction. On the other hand, if it was the only step then it would be worthless (Norway and Switz are as bad as their neighbours in all essentials).

PopulationPyramid. net ( take out the space) is a good resource to see the age-cohort breakdown by country. Easy clicking to move forward/backward 1 or 5 years at a time. click on the bars in the graph to see the raw numbers.

India and China are way too heavily skewed towards males up through about age 39. Each has tens of millions of "excess males" (ie, in excess of number of females in same age cohort). They could be used as either canon fodder, or exported as mail-order grooms for Western women who can't find men willing to be husbands/fathers. Non-college-educated women still want babies. And I predict there aren't or won't be enough western men even for the few college-educated women who do want babies.

If I were interested in being an entrepreneur, I'd start a dating service to introduce North American women to Indian and Chinese men. Or perhaps existing dating web sites will start advertising to women in US/Canada and men in India/China.

Another international possibility is to recruit Chinese women who were trafficked to the US (mostly those who were born/raised "off the books" in china due to one child policy) to go back to China to marry the "excess men" there. That might involve lobbying Chinese govt to grant "amnesty" to the girls and their parents in order to entice them back to China.

Japan is in bad shape. baby-boomers won't be able to, or allowed to, retire. not sure what the consequences will be, either importing workers for elder-care, or else a huge increase in suicide/euthanasia.

the US "pyramid" is straight up and down, and that is only due to high fertility among immigrants.

From the looks, India and China are poised for heavy emmigration (outflow) of men.

@Books - I don't agree with this way of looking at things - it goes too far in regarding people as interchangeable units, in line with modernity and against Christianity.

And - as such - such policies of 'moving populations around' would in practice (I would think inevitably) be directed towards sex, economics, politics etc; and not (real) marriage.

I know that this is Not At All what you intend or want! But I think you have fallen into that way of thinking. Our problems can indeed be defined demographically (as a shorthand, representing motivations), but the solutions cannot.

BC, I'm not proposing mass migration as a solution to anything. I'm just predicting it will happen, and it will be somehow related (though not totally driven) by
a) gender imbalance in India and China.
b) at least some Western (or north american) women will still want babies and nominal husbands.

@Books - IF present trends continue, I think we can be sure that the outcome you hope for will Not happen - because it has too many potentially good consequences.

If it looks as if any globalist policy is having the net effect of increasing the strength of marriages and families - then it will rapidly be reversed.

When demons are running things at the highest level - this is what we should expect.