The Fish Can Sing - by Halldor Laxness, 1957 (Translated by Magnus Magnusson) 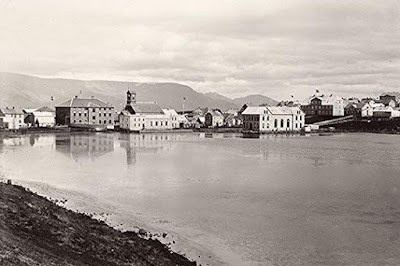 This is certainly one of my favourite novels; and, I would say - despite that it is translated from the Icelandic - one of the best I have read. I can pick it up, open it anywhere, and immediately be transported to the land between the Tjornin pond and the sea-edge in Reykjavik around 1900.

A book of a very particular, unique, poetic, surreal and humorous atmosphere - full of the strangest, yet simultaneously most commonplace, characters; a book quite unlike any other.

Including being unlike other books by Laxness. I have read about six of his novels, and each was extremely different from all others - except in the underlying signature: a flavour and style of prose. In Laxness, time is slowed-up to reveal the epiphanic significance of each moment, the way that each moment unfolds an ultimate significance.

Despite all this; the novels do not contain answers - because Laxness himself did not have answers. He understood the detailed nature of the problem of human life; he understood some of the things that needed to be fixed in life - but he did not know the Big Picture, indeed he probably denied the reality of any Big Picture (was indeed hostile to any who claimed to know it), and so his books are always sad at a deep level.

This book is sad with knowledge of the child's life of unconscious immersion in the world of spirit - lost to adults, lost in history. There is an indirect exploration of Taoism - as the yearning for restoration of this life - and simultaneously the knowledge that this cannot be more than a superficial and bracketed (and thus insincere) recovery of that lost innocence.

The hope is that, for moments, there can be a recovery and satisfaction in art - in this book in song, in another book in poetry, in another in 'folklore' - and there can indeed be such moments. But there is an awareness that if moments are all, and these moments lost in change and mortality - if that is All There Is, then they they are mere pleasantly-delusional sticking plasters on the Big Problem.

Nonetheless, this book does a great deal - more than nearly all books; and it crease a trance-like state in which knowledge becomes experience. To read The Fish Can Sing - translated by Magnus Magnusson* - is to experience its world and people. It's up to each of us to learn from that experience.


*Magnus Magnusson was a household name in Britain through the 1970s onwards, mainly for presenting an extremely popular (indeed iconic) TV quiz called Mastermind, also for various TV documentaries. I exchanged a few e-mails with him nearly 20 years ago in relation to his Halldor Laxness translations - which are among the best translations of anything I have ever read. Coincidentally, some of MM's direct descendents are friends of my close family, although I've not met them.

By reputation MM was a drinker and could be a bit of a bully. Mind you, if I had spent years surrounded by vacuous telly types maybe I'd have been a short-tempered boozer too.

None of which need have compromised his skill as a translator in the least.

@d - MM was Icelandic and lived in Scotland which tends to mean all or nothing, either teetotal or bingeing - as you know (from the latter part of the equation).

Each time I start to think of myself as a fairly well-read chap, someone comes along and writes an intriguing bit about a book and author I don't know, and I quickly realize I am not nearly as well-read as I believe myself to be.

On the flipside, posts of this nature inspire me to discover these books and authors I don't know. Judging by what you have written here, I should certainly read some Laxness.

Have you ever been to Iceland? I have always wanted to visit, but the older I get, the less I like to travel - so I might not ever get there at all. At least not in this life.

@Francis - Yes, I once spent eight days in Iceland, circling it - with a few days in Reykjavik. It was a very memorable holiday. We were fortunate with dry sunny weather and it was Midsummer - I suspect it would not have been so memorable with the more normal, prevalent wind and rain.

I like what were apparently the early Viking sailing directions for reaching Iceland in the Spring or early Summer.

Sail west, at constant latitude. When you see the whales passing in front of you turn to starboard and follow them.

And so they followed the mid-Atlantic ridge to Iceland.