"Clear the decks of seamen!" - more smut in the tradition of a Scheidt Christmas* 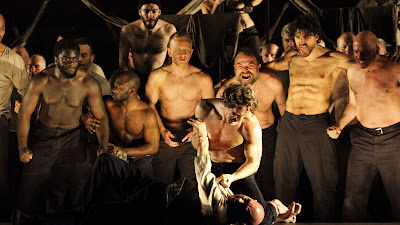 The opera Billy Budd, in a not-at-all camp production, apparently starring Brian Blessed centre right...
John Amis reports:
When Benjamin Britten announced that he was going to write an all-male opera [set on board ship] we thought he was barking mad... Britten sent Michael Tippett a copy of the libretto, asking for comments.
Tippett replied saying what a good libretto Eric Crozier and E.M.Forster had written.
But he suggested that a line in act one might be misconstrued: Claggart at one point sings "Clear the decks of seamen".
Britten wrote back saying what a filthy mind Michael had.
But he cut the line.
* See earlier posts...
Posted by Bruce Charlton at Wednesday, March 24, 2021

By the author of Moby Dick...

I saw the English guitarist Adrian Legg in concert years ago and he mentioned that there was an English children's program with a character named Seaman Stains!

@drizz - Yes, that was part of an amusing, but completely false, urban folk tale about the excellent (albeit worst animated cartoon in history) series, Captain Pugwash - https://www.youtube.com/watch?v=Hj1XX4sCibY - indeed, it became so well-known, that the originator of that meme cluster (Victor Lewis Smith) had to appear in court and pay-out damages to the producer.