Great music from the Albion Country Band, but leftist-contaminated lyrics...

Up until a couple of years ago I would honour and (to an extent) celebrate St George's Day. For instance, when I was at school I home-made a St George's flag with paper and a pin, and wore it on my lapel. A few years back, I purchased a small steel badge of the flag to wear on this day.

But as the nation of England - including all of its institutions - has become more and more corrupt and net-evil; this kind of patriotism became more of a hope than a belief. And as of 2021, it ceased to be even that.

Now, I do not see any Good in any national thing as-is, here-and-now; nor do I have any optimism for any such. My affection for England and Englishness is directed at the past, not the future.

I remain devoted to the land itself, the place and its spirit - hills, trees, skies, woodland, rocks, rivers and coasts; and to old buildings, stones, tracks and earthworks... but not to the people.

The people of England are by now unworthy; merely 'inhabitants': zombies, traitors and aliens. Their attitude to England is a mixture of indifference and hostility. All those organizations that are supposedly 'devoted' to our 'heritage' and 'environment' have embraced its sequestration and shabby subversion, if not obliteration, in the name of whatever Leftist value-inversion is current.

Furthermore, and especially over the past year; all the once-net-Good national groupings (even of an more informal nature) have been co-opted or suppressed.

There is no Good England any more, at the societal level; and the evil-England is now - Very Obviously - just a regional office of the totalitarian Anti-Christ-ian World Government.

And patriotism for England as-is has become just a part of The System - controlled-opposition; a snare for the unawakened.

Nonetheless the idea of England - England as an Archangelic guardian, perhaps? - retains power in the hearts of Anglo-Saxon Englishmen and Norse descendants of the Northern counties*.

*But not the Celts (who mostly define themselves against the English); nor the Norman tyrants ... but they have no hearts, anyway. And another thing - St George has always suffered from being a Norman imposition - the truly English Patron Saint was Edmund. 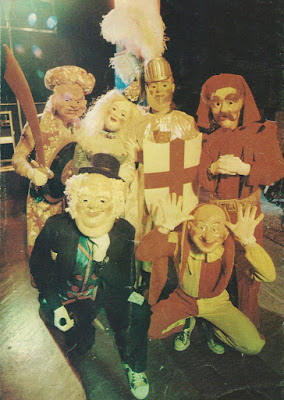 Note: St George is a character in the traditional Mummers Play - done here by Steeleye Span as an interlude in their music tour of 1974. I saw this at the Colston Hall, Bristol where they were supported by Gryphon - a dream combination for me.

I wish the YouTube poster or a commenter had keyed the lyrics for us. I could hear something about "backroom boys", where are they and can they save you now, and "the greedy" but I couldn't make out much else. Leftist, I'm guessing, in that the song addresses nothing any deeper or more transcendent than material matters.

Contrast that with the Irish song "Slieve Gallion Braes". "Tyrannizing landlords" are mentioned but the song is addressed to the land itself.

@ap - The lyrics are self-consciously in the Old Left tradition of English Radicalism - Diggers, Levellers, Cobbett, Luddites, Chartists, Tolpuddle Marytrs etc. Which is hardly bad at all! compared with the post sixties New Leftism - and contains a great deal of good. It was interwoven with Nonconformist, Low Church Protestantism until about the middle of the twentieth century.

I personally knew one of the traditions last representatives - Norman Dennis - https://en.wikipedia.org/wiki/Norman_Dennis.

But - with just a few noble exceptions - these Christian Old Leftists nearly-all followed the mainstream, and became thoroughly corrupted - indistinguishable from the advocates of value-inversion.

@MA - Certainly not! Sam is English, not Irish.

He would be singing some song of the English West Midlands - maybe a bit like this:

I wonder how Lewis might have had Dimble and Ransom work out the 'hauntings' of nations they discuss, with respect to Wales, Scotland, and Ireland, and further find this post has me wanting to attempt some serious pondering over Merlin and Ransom's earlier discussion in That Hideous Strength of Pendragonship, 'Saxon' king (whose subject Ransom considers himself - presumably still George VI), and related matters.

D.H. Farmer in his handy Oxford Dictionary of Saints (1992 ed. 3) notes "George has been known in England since the 7th-8th centuries, evidenced by the Martyrology of Bede, and the OE Martyrology. He is also recorded in the Irish Martyrology of Oengus. Aelfic also repeated the Legend." Embracers of the 'haunting' should not too thoroughly concede him to the Normans, despite the massive post-Conquest development of his cult. Farmer further notes, in the context of Henry V invoking him as England's patron at Agincourt, "even then, Edward the Confessor and Edmund of East Anglia were not entirely displaced" and further that, by the later Middle Ages, "not only England, but Venice, Genoa, Portugal, and Catalonia regarded him as their patron" and he was "numbered in Germany among the Fourteen Holy Helpers while Russia and Ethiopia also venerated him." Many scattered sparks of this may still glow - and unite us - in the current darkness, even where we do not certainly see them.

@DLD - Thanks for that context.

I can see the appeal to any rulers engaged in constant attempted conquest (as were the Normans in France for several centuries) in adopting a dragon-killing warrior saint, rather than a martyr. My own preference would be for Cuthbert - a miracle working hero of asceticism. Cuthbert has more churches names after him than any other English saint, apparently.

When I visited Durham Cathedral, I was a lover of Bede, but did not know much about Cuthbert - yet I was powerfully moved in a way it is hard to describe when I stood by Cuthbert's grave - the reality of holiness and wholeness, despite the sharpness of death separating body and soul?