Aide from Steeleye Span, my favourite group of 1974 was certainly Gryphon; a four peice band with recorders, crumhorns and bassoon, guitar and percussion - who performed mostly Medieval and Tudor music with a folky verve and humour;  and some jazzy improvisations

Including 'Mummerset' accents and musical jokes:


In the late spring of 1974 I saw the my Dream Team combination of Gryphon supporting Steeleye Span at the Colston Hall in Bristol - maybe the best concert ever, for me?

Within a year - as seemed to happen a lot in the seventies, Gryphon had brought in electric guitars  'progressed' towards rock music - and were involved in providing music for the Royal Shakespeare Company Tempest production - leading to perhaps their loveliest achievement - the title track from the second album Midnight Mushrumps.

And in less than a year from MM, the 'progression' of Gryphon had essentially left-behind their early selves and they became a pure rock band, at which point I lost interest.

But the first album and about half of the second one, remain firm favourites - and the abiding image or vision of an exceptional group of highly musical young men having fun: 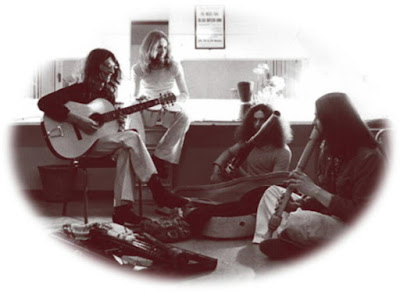