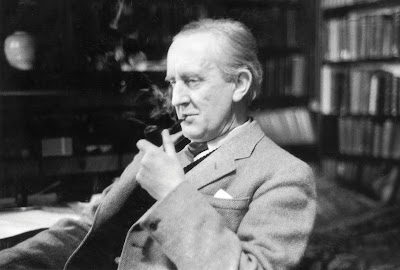 JRRT pondering what to do about the Normans...

Long term readers may know that - like JRR Tolkien - I have a pretty strong loathing of The Normans and their conquest of Anglo Saxon England (and, then Britain)!

The motivations of the Norman Conquest, and the new ruling class, were a very horrible mixture of sheer exploitation, vindictiveness and a pridefulness that went so deep as to regard their subject native Saxons as lower beings - of lower value than animals (especially horses!).

Nearly all of the the monarchs for about three hundred years regarded England as just a playground for their obsession with hunting, and the people as a kind of vermin to be kept crushed (under "the yoke" - only partly necessary for growing a bit of food, and providing henchmen for their favourite sport of inter-Norman war.

We didn't get a 'good King' - who exhibited a love of the well-being of his subjects, who saw himself as father of the nation - for many generations. Probably, we had to wait until Queen Elizabeth I, before we had such a monarch - one who embodied the national spirit; and 1558 was a looong time after 1066.

Of course the Normans were very talented at fighting and building; and were more intelligent than the Saxon masses - especially after they had killed or exiled nearly-all the Saxon ruling class and priests.

But they were so selfish and short-termist, and so lethally thieved and fought among themselves (on and on - the Game of Thrones was 'everyday life in Norman times'); that the once prosperous and delightful Island of Britain was kept-down and held-back for many centuries - at least until Henry VII (1457).

And even then was soon diverted into the typically Norman chaos (Henry VIII etc) and aggressive ventures of Empire (especially from Queen Anne 1665, although she counts as a 'good' queen). The (Norman) British Empire has, since 2020, been transformed into the current global totalitarian System.

Now; everybody is under The Norman Yoke+...

So, the Normans are still with us and still the same as ever (i.e. servants of evil) - still lineally (genetically) present at high levels among the ruling class; still behaving like the snake-eyed, soulless, demon-loving psychopaths They are; and still crushing the majority whom They loathe.

But this time the Normans are even worse; because They have gone-further in evil than their pleasure seeking and crushingly-bureaucratic past selves.

Now They have embraced the newly dominant Sorathic form of 'chaotic evil': an evil that sheerly and spite-fully delights in the destruction of Good and the divine creation - merely for the sake of destruction.

Destruction, this time around, not excused by Their own pleasure, not even for increasing Their own power and control; but merely because They Hate God.

Our destiny to live with the recurring question of how to deal with The Normans?

How to respond to Them, how to live better than They do by higher and divine goals; in despite of the whole apparatus of state-and-church aiming to persuade, terrify and coerce us into ever deeper evil.

It is well to remember that this mortal life is not meant to be only pleasant - indeed, since we are ruled by entropy, it cannot be thus.

Our life is (instead) a matter of learning from experiences - and the Normans continue (now on a global scale) to provide us (but now the whole planet!) with extreme and stark experiences - from-which we ought to be learning, in preparation for the world to come...

That is, a world where the Norman problem will not exist! - because only those who will commit eternally to live by love, will want (or be able) to enter Heaven.

The offer is open to the Normans, as to everybody else; but it seems unlikely that many of Them will want to avail themselves of it; so deeply are They in servitude to evil.

But those Normans who do choose resurrection, in despite of their spiritual-lineage and prior choices; may well turn-out to be among the best of all Men... 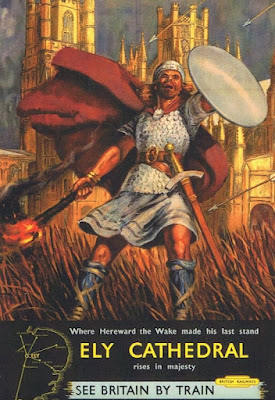 One man's reaction to The Norman Yoke

+ Note: There is an excellent description of the truth behind the Norman Yoke 'myth' at the start of Michael Woods' In Search of England (1999) - which is itself a mostly-excellent book; marred only by some incoherent, politically-correct evil-nonsense at the very end.

Well there certainly aren't many Anglo Saxons in the current cabinet so yes as usual we are still run by the Normans although I think there was a brief period after WW2 when we had a bit of rest bite.

My family descends from the Normans, apparently. Our house crest, I kid you not, features a serpent encircling the base of a broken pillar. There’s certainly a streak of cruelty and will-to-power, so thank goodness we’re only diaspora peasants.

After reading this morning about the sickening mess the U.S. has created in the Middle East (https://libertarianinstitute.org/articles/syrian-christians-were-quietly-warned-before-the-war/) it occurred to me that what "we" have done there – the destabilization of society, the annihilation of Christian communities, the immiseration of the people, the genocide and population displacement – is being done here, too (and in the U.K. and Europe). It is the fruit of the same Norman spirit you describe that views people as so much dirt to be shoved around or discarded as needed. There is no better example of this than the global "public health" terror.

Or “normies,” as they’re called these days.

A peasantry with it's native Elite destroyed whilst replaced by a hostile one. Is in a dire situation.

And we all know that historically peasant revolts led by peasants only failed all the time.

Because leadership capability isn't present so much at all.

I recently read John Julius Norwich's "The Normans in the South", his very readable account of the Norman conquest of southern Italy and Sicily that was more or less contemporary with the English conquest. They were one riotous group of bad hombres. Total mercenaries, endless ambition and absolutely untrustworthy. I found myself sympathising with the Popes who had to try and contain them.

A real contrast with the Scandinavian descended Normans and the High-Trust Highly functional Scandinavian societies of early modernity.

@JR "High-Trust Highly functional Scandinavian societies of early modernity" - but it needs to be noted that they were 'nonetheless' self-loathing and suicidal - as evidenced by rising anti-marriage, anti family and anti-natalist motivations - which derived from their underlying anti-spiritual, anti-God and anti-Christ metaphysical beliefs.

Note well the motto "Honi soit qui mal y pense", which tells you frankly that they don't care what you think of them.

@JR "High-Trust Highly functional Scandinavian societies of early modernity" - but it needs to be noted that they were 'nonetheless' self-loathing and suicidal - as evidenced by rising anti-marriage, anti family and anti-natalist motivations - which derived from their underlying anti-spiritual, anti-God and anti-Christ metaphysical beliefs."

Orthodox Christianity as declared at Nicea?