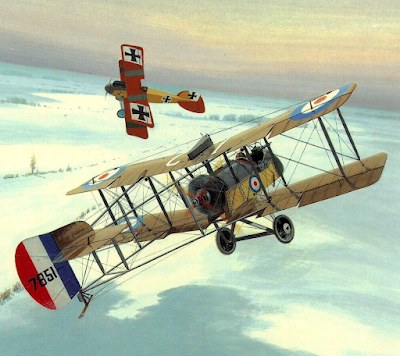 The 35 minute 'dogfight' duel between Manfred von Richthofen and Lanoe Hawker. The Red Baron expended 899 rounds of ammunition that missed entirely; but the last bullet hit Hawker in the head. It seems that this was vR's proudest victory, and the salvaged machine gun from his DH2 was mounted over the Baron's front door. Hawker was given a burial beside his machine with full military honours and an inscription  reading: GEFALLEN NACH HELDENHAFEN LUFTKAMPF - Fallen after heroic air combat.

I have been reading an excellent, idiosyncratic, book called Signed with their honour: The story of chivalry in air warfare 1914-45 by Piet J Meirjering (1987) 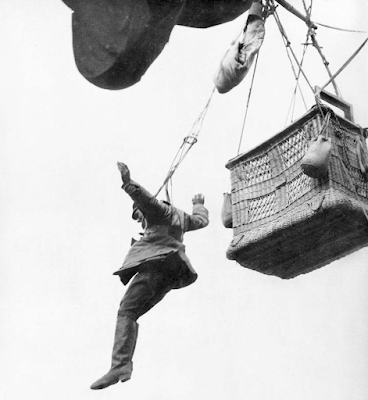 It is about chivalry in air combat - mainly in the First, but to some extent also the Second, World War.

For example; the question of whether it was legitimate to shoot a parachutist from an observation balloon in WWI - or from an aircraft in WWII. The official instructions were typically that enemy aircrew should be killed - thereby eliminating a valuable war resource, unless they were falling into home territory where it could be assumed they would be made prisoner - and interrogated.

But many pilots would not shoot parachutists; it seemed wrong to kill a helpless man, whatever the rationale.

In a telling episode from WWII: Hermann Goering (an air ace of WWI0) asked Adolf Galland (WWII ace) what he would do if instructed to shoot parachutists. Galland braced himself, and stated that he would resist such instructions with all the power at his disposal. Goering (affectionately gripping Galland's shoulders) said he would have expected nothing less - and no more was heard of the idea.

This was only one aspect in a war environment that sustained a broadly chivalric ethic: Signed with their honour provides many examples, some of which moved me deeply.

For instance, the British and German aviators would often inform each other when a pilot had been captured or killed; sometimes exchanging personal goods for prisoners or from the deceased. (This behaviour is described in the WWI Biggles books - which are substantially accurate, albeit selective.)

This would involve the considerable risk of flying over the opponents aerodrome and dropping a package with a streamer - the friendly messengers would naturally be subject to anti-aircraft fire, and the danger of interception - just as if he were intending strafing or bombing.

Pilots would also wine and dine each other when they were captured unharmed - before sending the opposite number to be a prisoner of war. Descriptions of honourable burial ceremonies, and photographs of pilot's graves were sometimes forwarded between pilots - to be forwarded to relatives.

The book raises interesting questions about the features of air combat that encouraged a resurgence of these chivalric practices - which had seldom been seen since the late middle ages. The author points to the individualism of the combat, and the high degree of autonomy of action in WWI. The decline of these aspects - as air forces were brought under generic military discipline, and mass tactics were deployed - lends weight to the importance of this factor.

Yet, individualism is not enough. I think there is a more general point to be made. Chivalry seems to grow spontaneously when individuals are embedded in a elite role or profession; and when members of such a corps have a fellow-feeling for those who are similarly 'initiated'. This was the situation of the original medieval knights, who formulated the chivalric ideals.

In other words, there needs to be both a strong, and tight knit, group identity or esprit de corps (courage being sustained by mutual cooperation and protection) - and also a high degree of individual autonomy within that elite group. To put it the other way around; for chivalry to thrive, individual autonomy must be combined with strong affective bonds to a specialist group.

In such situations, honour is extended to both sides in a competition or conflict - even war.

I caught the tail-end of this in having trained as a doctor. Those who had been through the tough and transformative process of medical initiations, had a spontaneous fellow-feeling with other doctors; and this transcended national boundaries.

It was such attitudes of 'professionalism' that led doctors to work hard and to a high standard - in order to gain status among colleagues; and to form a cohesive grouping. This led doctors to favour each other on the one hand (for example providing free consultations and perhaps treatment to colleagues and their families), and on the other stood in the path of the managerial control of medicine. It also sustained high morale - such that doctors tended to work for many years and decline retirement.

It was an obstacle to full-bureaucracy that caused such professionalism to be all-but eliminated by changes to medical training and practice (except in a few specialties, such as some types of surgery, where it still hangs-on).

The deliberate crushing of medical esprit was, of course, rationalized in terms of preventing real or imagined abuses (such as snobbery and racism) - but in fact, the bureaucratic-managerial takeover was at work in all such professions and jobs: science, law, among clergy, the police; and of course the elite military units.

All in all of these, the ethic of hard work, cooperation, and higher-then-necessary standards have been eroded. Nowadays, medical morale is low and declining; and indeed most professionals retire as soon as financially possible.

In the process of managerial takeover; both elitism and freedom were stripped-out and replaced by procedures of ever-greater scope and detail.

Autonomy of individuals has been demonized as a threat to social justice (even when associated with the highest levels of 'functional' performance); and only that which is thoroughly monitored and controlled (i.e. by managers) is said to be fair and 'efficient'.

As so often; outsiders resentment against functional-elites has been stoked-up to destroy those who most effectively resisted the totalitarian agenda. Those who effectively do necessary work have been bureaucratically-subordinated to those who claim impartially to manage.

And the (surely obvious?) fact that what results is merely control-of-everything by controlled-bureaucrats, and that bureaucracy innately grows in size and complexity while declining in efficiency and effectiveness - is never mentioned, and kept-off the agenda.

In such a world of operationalized resentment and disregard for functionality - there is no place for chivalry.

When I first started working in the NHS as an accountant in the early 1990s the hospital was still run by senior medical and nursing staff and everything was patient centered with minimal admin staff, then the managers took control with the threat of sackings if senior medical staff didn't comply with the new regime.
When I left the NHS a few years ago it was stuffed with managers and the dreaded Human Resources Department held sway and they would even openly admit the main purpose of the NHS was to spread equality not to treat patients.
I also notice in Friday's mini budget that although the country is now bankrupt the government has absolutely no intention of cutting government spending by cutting the bureaucracy they'd rather sack the nurses.

Fascinating. They captured this phenomenon somewhat in that film Flyboys a while back. We had a similar fraternity - women included - in my class in flight school. Harsh years-long training with more than fifty percent being forced out by failure in flight tests and exams produced a kind of tele-empathic family bond between those of us that made it. This is probably the kind of intense love mankind was being sustained on in the tight-knit tribes, villages, hunting parties, and warbands that make up most of human history. By comparison, the modern world is a wasteland of dismembered loneliness.

I guess chivalry is just a fraternity that transcends sides of a conflict. A strange spiritual fraternity, based purely in the heart. The System seems to be designed to purge it from the earth, along with all other loves.

Chivalry is the antithesis of bureaucracy. Even the best bureaucrats are simply managers keeping the System operating. Rather than being a bastion of warrior based honor, the US military is now an SJW corporation incapable of even understanding why or how to fight wars.

The Birdemic fully exposed doctors and scientists as being mere technicians, not professionals operating w/ a sense of autonomy. It's frightening how lockstep the medical advice had become even when "the science" would contradict itself.