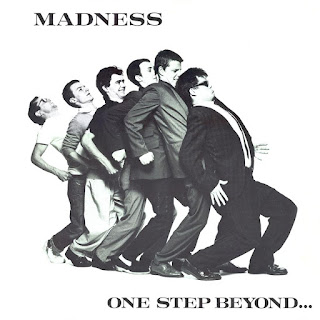 Ever since I first heard them, I was very keen on the band Madness, which was at its best from 1979-1985; although most of the best work was early.

The band were working class cockneys from North London, and had known each other since childhood; sang with their natural English accents, and often about the events of ordinary life.

The musical style was - rhythmically - heavily influenced by Jamaican Ska and Rocksteady reggae (their name came from a track by Prince Buster and that is who is referenced by the first track below: The Prince); but they put an unique stamp on it, and used careful and effective arrangements (for which I think the keyboardist, Mike Barson, was mostly responsible). It often had the quality of a fairground organ.

As musicians, they were excellent. The lead singer - Suggs - had a distinctive and very natural way of putting across a lyric. And the seventh member of the band - Chas Smash - provided much of their special visual identity with his original (and effective) style of dancing and fashion (see videos below, most clearly on Baggy Trousers), backing vocals; and his interjections and interactions with Suggs.

Indeed, the brilliance of Madness was very much visual, with a trademark way of marching in-line and in-step, as a kind of human caterpillar (see illustration above) which featured in most of their videos); and various other tropes such as a manic, bared-teeth, fixed 'smile' - and particular ways of moving, interacting - as well as dancing.

In general, a surreal - hit and miss, semi-private, take-it-or-leave it - style of humour - which they called 'nutty'.

All very different, and English - and, although something of a British 'institution' - the band never made significant popular headway in the USA.

But best and most important was the music, some of which has a permanent appeal to me:

Great band very upbeat unlike other bands of their time like The Jam & The Specials who I also enjoyed but were generally less positive and sung about getting beaten up on tube station platforms & inner city decay. Paul Weller said they were accused of being defeatist and pessimistic, looking back that is exactly what they were.

I was a US Madness fan, even had one of their albums (7). I liked their song Night Boat to Cairo, the video for which had them looking like Tommy Adkins in pith helmets, etc. That era was the last hurrah of anglophilia in the US: Chariots of Fire, Brideshead Revisited (which everyone from my grandparents to my school friends watched), etc.. I also liked the other English ska bands of that time like the Specials, the Selector, the English Beat, Bad Manners. I even made a pilgrimage to some obscure theater to see the movie Dance Craze that featured a bunch of those bands. They had one hit here, Our House, but that was later, and they did a series if Honda commercials in Japan. Not bad for a bunch of (how you say?) yobs from North London.

@Mike - Yes, their high spirits and fund were certainly at the opposite extreme to the likes of The Jam, and The Specials (you could also name Elvis Costello) - both of whom I liked a great deal as well, at the time - although less so now. For me, a very different person now than then - Madness has worn better than most.

@AG - Glad to hear there was support for the Nutty Boys on your side of the pond.

The era of Anglophilia was, as usual and understandably, for the upper class glamour and nostalgia - which was very different from the contemporary working class world of Madness.

They were great. They did have a following in the USA among the college crowd. I saw them perform I think in Austin Tx in 1981 or so

@Anon - I don't often publish Anon comments - so remember that for the future.