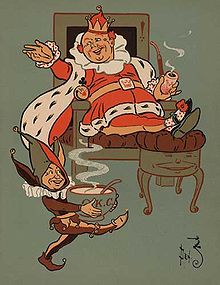 My approximate vision of King Wensas - 'Bring me flesh! etc.'

I am one of those who remember what it was like to be a young child.

At Infant School, we were taught to sing hymns and carols 'by ear' - and almost never saw the words (and certainly not the music) written down.

It was an immersive experience to engage in singing - I was hardly aware of myself, and not aware of my own voice among the droning mass. But, although 'hardly', I was aware of myself - in an observing way that did not allow for much of an active role.


I was aware of my-self even from age five, when I began school - because I began school twice. I attended for about a month in Devon before we moved to live in Somerset - when I had to go through the business again...

Two 'first day at school' experiences in just a few weeks... This was perhaps one of the least enjoyable things of my entire life; since I did not like going to school in the first place.

The reason I recall self-awareness is The Lord's Prayer. In Devon we had apparently been taught the 1928 Prayer Book revision which changes three words - whereas in Somerset we used the original translation. I remember chanting 'Our Father who art in in Heaven' (as I had learned at my first school) - when everybody around me was saying 'which art in Heaven'. They were saying it wrong.

There was also a hymn that I had been taught using the word Jesu, when the new school was singing Jesus - and again my interesting reaction was to bellow-out the right word Jesu in face of the hundreds of others doing it wrong.

(I suppose that response was unusual for a child, since most children are instinctive conformists - but the child is father to the man; and this was only the first of many times since, that I have found myself in a minority of one but with a conviction that everybody else was wrong: not myself.)


Wrt. Jesu/ Jesus: in part, mine was perhaps a primitive aesthetic response - since I recall that the word Jes-yoo sounded better in this particular hymn. This would not not surprising, since presumably using the word Jesu was a 'poetic' distortion, devised for exactly that purpose. But mostly it was because Jesu was right, because that was what I had first learned.


I can also recall a vague but ineffectual puzzlement at what I was singing. It was not unusual for us to be singing things we did not understand, so various types of nonsense based on mishearing were common.

Good King Wensas
Last looked out
On the feast of Stephen...

Those were the right words; and I was actually annoyed when (years later) somebody tried to explain about Wenceslas.

Why, I wondered, did the poor man expect to find winter fuel indoors? I vaguely speculated he might be burning furniture.

I pictured a bloated, boozy King Wensas greedily shouting for more than his fair share of food and drink, and using-up the scarce firewood, during this exceptionally harsh winter. The moral of this carol was - presumably - don't be like King Wensas!

Thou and I shall see him dine
When we bearthemthither

What? Who was this 'him' they were talking-about? And bearthemthither was a strange word - what could it mean?


Thus was my infant life. The world was confusing, overwhelming; and much of it was arbitrary and senseless.

Unsurprising that I clung so tenaciously to what I first learned - and in that smaller, kinder, familiar and more natural place of Devon; rather than this bigger, harsher Somerset: so full of strangers.

To hold fast to that which we first learned is a form of loyalty: Devon already had my loyalty - Somerset had yet to earn it...

And loyalty is one of the most basic tribal emotions. Once again ontogeny recapitulates phylogeny: individual development relives the evolution of society... or, actually, vice versa.

I always wondered why the nation of Orientar needed three kings, when most kingdoms did just fine with one.

@And it doesn't appear on any map either...

I made almost the same point to my wife a couple of days ago...When I was in school, we sang in Christmas carols, and many other songs, in class, and French Christmas carols in French class. As I result, I have had a lifelong love of these wonderful songs, and music in general. This time of the year, we play them on Pandora for hours every day, and attend every Christmas concert we can...

I was in my early youth displeased to hear from the pulpit a sermon that involved the story of disassembling the print head of a pin-impact printer. The speaker (I was too young to know or care about his ordination status) related that, having taken it apart, he was stymied from putting it back together by the 'fact' that there were 81 ways to put nine pins into nine holes. I had not memorized the multiplication table, and certainly had no knowledge of factorials, but I was immediately certain that the 'fact' was incorrect and spent the rest of the service working out that there were 9x8x7x6x5x4x3x2 ways to put 9 pins into 9 holes (which was not easy, since as mentioned I didn't have the multiplication table memorized, also, I was not in possession of any writing tools for keeping notes).

My resulting dissertation on the incorrectness of the talk was not appreciated.

I do have memories of more ordinarily childish behavior at even younger ages, but for the most part there is nothing of what you term "self-awareness" in such behavior, I was simply doing that which I had been led to believe children were supposed to do. And I thought I was doing a fair job at it. It was only in adulthood that I realized that I had in fact always been absolutely terrible at pretending to be like other children, and that the other children hadn't been pretending.

We spoke English as a second language at home after Norwegian but before my grandmother's native language. I remember singing Christmas carols in Norwegian but none of the words it's like something in a dream. After my older brother went to school my family switched to English only. I was about three.

Now since my brother died only my uncle speaks Norwegian. Some years ago my grandmother reminded me my brother and I used to sing to our great grandmother when she was sick. He immediately remembered but I could only hum along.

@LP - Such things seem a way of specifically awakening in us the consicousness state of childhood.

@Bruce,
It does bring back odd feelings and old memories. Smells of pine and smoke and sense of warmth from the fire. Happiness and excitement the knowledge that of course Christmas was real. I still believe Christmas to be real but the absolute certainty is lost.

Certainty is a chimera - in the sense that we cannot be consciously certain.

As children we are certain only because we are unconsicous - as soon as self-awareness begins to emerge, then so does uncertainty.

It is one of those things that simply formulating the question 'are you certain' leads to only one answer that we are Not absolutely 100 percent certain... Not certain for every moment of every day, in all possible conditions...

In this mortal life, certainty is attainable but only for our best 'moments' - because we are here to *learn* - and certainty is a (temporary) reward for learning; but we must not get stuck passively basking in certainty, becuase there is more for us to learn.

In this sense, certainty is like happiness - it is intended to motivate us, and reward us - but not to be a steady state of being...