Schroedinger's Cat and the Anthropic Principle 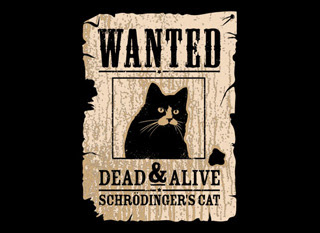 I will not try to explain the Schroedinger's Cat thought-experiment, or the Anthropic Principle, as associated with Fred Hoyle - 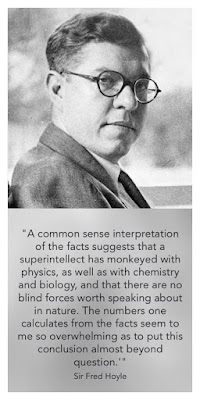 I just want to make a comment about the status of this kind of theoretical reflection in Physics - or in science generally. (Another related example would be 'the collapse of the wave function' when something 'quantum' is observed.)

As a scientist I have always felt there was both something significant, and also something wrong, with this kind of reasoning. And this, I think, is the consequence of trying to deal with matters of metaphysical philosophy within the paradigm of science - where problems of this kind can be described, or sensed, but not solved.

Science developed as a subject, at least since Newton, by ignoring the observer - that is by assuming that all relevant (competent, properly-motivated) observers would observe in the same way such that the observer could simply be left out of consideration.

There is an element of covert fixing about this! In the sense that only a few people are 'allowed' to function inside science - and there is an extended process of education/ training/ socialization/ indoctrination which scientists must go-through before their observations (or opinions) count for anything within science.

Some/ many/ most people either cannot or will not get through this process - and are excluded from science - indeed, all active scientists know that the ability to do science (that is, to be an observer who observes like other scientists) is pretty rare; and most will have come across plenty of people who just cannot do it.

(In the past, this was known via the personal contacts of 'invisible colleges' of self-selected and self-regulating people working on particular areas and problems - but nowadays what calls-itself science is populated mostly by people who can't do it - neither can they interpret it nor use it. Thus science is overall and overwhelmingly a thing of the past.)

However this pragmatic solution is incoherent, and always was incoherent - as Goethe (among others) sensed and argued two hundred years ago. It is obvious, on consideration - which is seldom done - that the observer is always involved in any science, as well as the inferred-unobserved-phenomena. In sum, consciousness must exist before science can be done; and science also requires phenomena independent of consciousness - however, nothing can be known of phenomena without consciousness.

More exactly, scientific knowledge involves, not either, nor or, but both phenomena and an observer. Furthermore, any real knowledge must be the same for all observers. So that-which-observes needs to be common-between scientist, and it must observe validly, if any science can be true. A Fred Hoyle commented 'It makes sense to suppose that a bit of God is operating in all of us... it is almost as if God doesn't know what is going on in the universe [and that human intervention] is the way that records are kept'.

In other words, Physics theoretical reflection like Schroedinger's cat and the Anthropic principle are partial and distorted formulations which are properly dealt-with in the philosophy of Rudolf Steiner and Owen Barfield - and indeed this seems to have been well understood by Barfield and his friend David Bohm.

In sum, these are problems that can be sensed from within science - in terms of theoretical incoherences; and problems of replication; and problems of inability to conceptualise a scientific method leading to anything more than expedient-but-not-true models, imperfectly communicated in ways whose imperfections can never be pinned-down...

Barfield knew Bohm? That is interesting and deserves a blog post.

STEM is so called for a reason.

I think that of mathematics we can most properly say that it consists of inferences that are obvious to a mathematician, but not necessarily to anyone else. Of course, the degree of mathematical intuition varies greatly, there is a difference between the observation that n+n = 2n and the observation that 2^n is fundamentally different from n^2. But with mathematics, the evident truth of a proposition does indeed depend greatly on the observer. Technology and engineering, on the other hand, deals with creating things that function entirely independently of the state of knowledge of the user. You don't have to know anything at all about how a car, computer, lighting system, etc. works internally to use it. You might think that it would be helpful to know, but in fact most of the time it isn't. What helps to be a competent user is intelligence, and that also helps to be good at understanding how a system works, but there is no direct connection between knowing how it works and knowing how to work it.

Science occupies the intermediary position. It requires math, of some level. The goal of an experiment is to frame the statistical correlation between an independent variable and possible dependent variables in such a way as to allow the extraction of a useful technology that can be used in engineering. Engineers can use math, but they can also use duct tape.

That is to say, engineering deals with boolean outcomes. Does it work? Does it work better than the alternatives? Does it work well enough to be worth the cost? The actual engineering requires unusual talent, assessing whether or not the result is "valid" requires only awareness of the obvious.

Note that quantum measurements create entropy / information. This seems unusual because all QM interactions are reversible. The resolution of this paradox is that the reversibility only works if you assume some variant of the many-worlds hypothesis in which all possible outcomes occur on branching timelines.

Note that we only subjectively experience one timeline, which intuitively should be fundamentally more real than any others. What determines what timeline we are on? What selects how the QM dice turn up?

Further suspicion: the "random" nature of the waveform collapse is subject to influences from *outside the system*. This is the mechanism by which the spiritual influences the material:
the spiritual changes the information that the mind perceives which *simultaneously* sets the physical reality.

Consequence: "Miracles" are simply a matter of spiritual forces (such as your soul, angels, demons, etc.) manipulating the QM dice to their liking. Atheist scientists do not believe spiritual forces affect QM, and their belief is so strong that they force their measurements to be random. Spiritual people perceive the opposite, thus generating the opposite result.

I think this metaphysical explanation is internally consistent: physical laws are always obeyed, yet there is tremendous freedom for a spirit to influence matter through mind using probability control. Our spirits can inject new patterns into the universe this way, thus taking part in Creation.

Any holes in this?

@RB - I've no idea - On metaphhysical grounds (like all science, although perhaps more than some) I regard Quantum theories as 'merely' models/ tools - clearly Not descriptive of real-reality.

"STEM is so called for a reason." - I assumed because it made a memorable new acronym; but in reality the core disciplines included are extremely different. Anyway, the idea that biology is essentially mathematical is untrue - it can be *made* so (as managers make a corporation auditable) but is not intrinsically so.