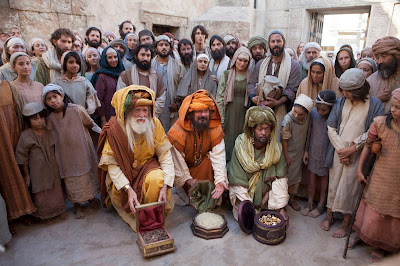 (The central Wise Man has a particularly amusing facial expression...)

The worst of the common Christmas carols is Once in Royal David's city - for three reasons:

1. It opens nearly every carol concert, due to a tradition established by King's College, Cambridge - which also means the first verse is usually sung unaccompanied by a boy treble who is seldom quite secure enough for such an exposed role...

2. The tune is dreary and there are too many verses (six).

3. The lyrics are both excruciatingly bad and theologically malign.

The key word of the carol is 'lowly': stood a lowly cattle shed (although I sang it as 'lonely' as a child, which is preferable); the poor and mean and lowly; the lowly maiden; poor lowly stable...

We also have such insipid stuff as 'mother mild'; and the cringe-inducing and dishonest propaganda: 'Christian children all must be/ Mild, obedient, good as he.' (This, of the same Jesus who left his parents at the Temple without explanation and was gone for Three Days!) Followed by Jesus as 'little, weak and helpless', 'dear and gentle'... Ach!

To be fair, there are some good things too, especially in the last two verses; reminding us that the author also wrote memorable words for two of the hymns with the best tunes: 'All things bright and beautiful', and 'There is a green hill far away'.

('...Without a city wall'... although as a child I wondered why a green hill would be expected to have a city wall...)

One of the best Christmas Carols is We Three Kings. Alright - the tune is a bit simple for grown-ups; but is a rollicking riot when 'sung' (with 'appropriate' gestures) by infant-school-aged boys.

And the lyrics symbolically encapsulate the birth, life, death and resurrection of Christ in a way that should be the envy of most sermon-writers:

We three kings of Orient are;
Bearing gifts we traverse afar,
Field and fountain, moor and mountain,
Following yonder star

Born a King on Bethlehem’s plain
Gold I bring to crown Him again,
King forever, ceasing never,
Over us all to reign.

Frankincense to offer have I;
Incense owns a Deity nigh;
Prayer and praising, all men raising,
Worship Him God Most High.

Myrrh is mine, its bitter perfume
Breathes a life of gathering gloom;
Sorrowing, sighing, bleeding, dying,
Sealed in the stone cold tomb.


And how good is that fourth verse, about myrrh! I can still recall being haunted by it, as a young child. 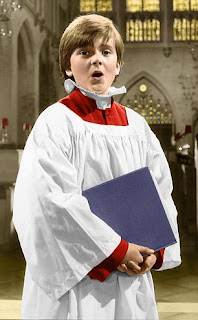 Aled 'I'm walking in the air' Jones; I'll bet he got sick of singing 'Once in royal David's'...

Thanks for this post, Bruce - it brought back a few memories. I'd forgotten all about "Once in Royal David's City" since having to endure it many, many times in my early childhood, but now that I've been reminded of its existence, I agree, and will add that I find it a nasty, trite, even damaging little song, because whatever its good INTENTIONS, it is seemingly calculated to harm true Christianity in the long-term by the spirit of inspid, passive obedience to authority both secular and spiritual that it seems determined to cultivate in its more suggestible listeners.

The less suggestible, of course, will simply tend to ignore such messages with the contempt they deserves - but if they are not exposed to more wholesome fare, as many now are not, this will simply lead to them associating Christianity itself with such squishy sentimentality, blind conformity and maudlin piety as the song encourages - which is precisely most of what most of those who actively reject the Christian faith now do, so this is no small cavil.

It seemed a favourite of the teachers at the first primary school I attended, for some reason best known to themselves, though unlike you I seem to have avoided encountering it very often since, perhaps due to my non-attendance at carol concerts through my teenaged and adult years. I'm pretty sure I remember my older brothers disliking the song enough that they would frequently sing a ribald parody around Christmas-time with some enthusiasm, alongside parodies of a few other commonplace carols. They have evinced no particular talent or inclination for versifing since, so these were probably not original productions!

I would (dis)recommend "Away in a Manger", among the commoner carols, as exemplary of much the same spirit, style and apparent philosophy. The tune is if anything even more saccharine, though it at least has the virtue of brevity, which also limits space for insipid and gratuitous moralizing once it has duly rambled on about what a perfect, helpless, weak, good, conformist little drone of a child Our Saviour was from the moment of his birth.

Over-exposure to these two songs, and others of their ilk, at an early age, probably turned me off Christianity enough to contribute significantly to the atheism I began to cultivate at around seven (before I even knew there was such a thing!).

Most of the hymns we sung out of the book with which we were issued of standardized, presumably "officially" comittee-approved, modern or modernized hymns had a similar effect, with the notable exception of "When a Knight won his Spurs", which at least had a rousing tune, and seemed unlike most of the others to be suggesting another, more inspiring world in which one could aspire to something actually worth striving for. It strikes me now as being not particularly Christian, but that was something in its favour at the time. Decibel levels also seemed to slightly increase when that song was sung, perhaps due to quite a number of other little boys joining in with more enthusiasm than usual.

Agreed on "We Three Kings" too - I always found it rather inspirational and stirring, especially the chorus. We rarely sung that one at school or anywhere else, of course.

"Yes, "We Three Kings" is both wonderful and fun to sing, and "Once in Royal David's City" was not part of my childhood.

"I enjoy discovering new carols, which often means non-English ones. I was profoundly moved by the lyrics of "Ich steh' an deiner Krippen hier", almost overwhelmed the first time I heard it, and Bach's chorale is a jewel."

I have to agree with you on We Three Kings, it's the only Christmas song that I can actually remember the first time I heard it.

In America we have "I heard the bells on Christmas day", which is usually arranged as an actual dirge. It can be sung with a brighter and more hopeful melody, but then the middle verses make no sense. The obvious solution is to simply use different music for all the verses, but this is quite beyond the capabilities of the typical congregation, or even their volunteer choir.

I've seldom heard "Once in Royal David's City", but "We Three Kings", aka "The Quest of the Magi" is very popular in America. After all, it was written here.

"I heard the bells on Christmas Day" was a poem by Longfellow written on Christmas Day in 1863, during the Civil War. His son had joined the army against his father's wishes the previous March and his wife had died in a fire two years earlier, which probably explains the funereal tone.

I enjoy finding little gems that weren't intended as Christmas music but sound like it anyway such as "Es sungen drei Engel einen süßen Gesang" which forms the fifth movement of Mahler's third symphony (the text is from Des Knaben Wunderhorn) and the first movement of his fourth symphony which, intentionally or not, evokes for me the pleasant side of winter. Respighi's Trittico Botticelliano has a middle movement, "L'Adorazione dei Magi", which uses variations on "Emmanuel" as a theme.

For that matter, the premier of Handel's Messiah in April 1741 more that suggests it was intended for Easter season.