Inexplicable and instant celebrity - a sign of the evil Establishment at work (i.e. the strategic demonic agenda) 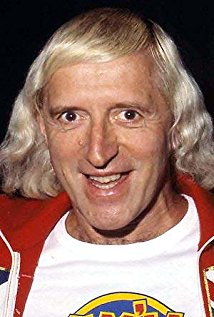 A flattering photograph of Sir Jimmy Savile - charity fund-raiser, Papal knight, friend of the Royal Family and Margaret Thatcher etc. One of the most evil men in the history of Britain. The snake-eyes tell you everything you need to know of his true nature

It isn't a new phenomenon, but perhaps nowadays more frequent and obvious than ever before, that very suddenly and from nowhere a person IS a celebrity; despite his or her lack of looks, talent or charm.

And these inexplicable celebrities often seem to be the worst ones, the most evil in their effect.

This is because this kind of manufactured fame and influence is a product of the pervasive and extensive power of the evil (global, demonic) Establishment; who can (not always, but with a high degree of reliability) manufacture celebrity pretty-much at will and from the most unpromising material.

A very clear and early example of the phenomenon was Jimmy Savile. We can perceive now (at least those capable of perception can perceive) that Savile's colossal, decades-long celebrity was manufactured, sustained and protected by the Establishment mainly on the basis of his functioning as a procurer of children for sexual abuse by the elites.

Most manufactured-celebrities do not have so important a role as Savile - and presumably function merely as agents of corruption via the mass media, spreading-out into the unified-linked-bureaucracy; for instance by lending support to and promoting the short-termist-hedonic sexual revolution (the prime agent of corruption in modernity) and the totalitarian, materialist Left-agenda.

Of course, there are many celebrities who attained their position by talent, beauty and/or charm - and these must be corrupted after-the-fact. Usually they are quite-readily so-corrupted (by sex, fame or money - combined with intimidation) - but clearly this process is less reliable; and there is a danger that meritocratic celebrities may rebel against the agenda and their celebrity then needs to be destroyed - although this can be difficult (eg. Jim Carrey, at present; Mel Gibson a few years ago).

Anyway - it is always worth a second look when some person, or some issue (e.g. the 'trans' agenda) suddenly arrives from nowhere to become an apparent public obsession; such phenomena are strong prima facie evidence of the strategic demonic agenda in-action.

For a second I was tempted to venture into the mass media swamp to find out what's happening with Jim Carrey at the moment. But only for a second.

@William. Quite right too.

In my defence, at least I didn't provide a clickable-link...