Jesus and the human 'gene pool' 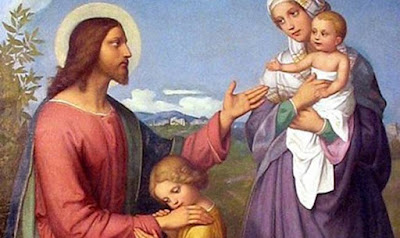 I was startled recently when a priest (Anglican, liberal) in a carol service said that Christmas celebrated Jesus entering the human 'gene pool'.

I expect he didn't really understand what he had said. But it set me off thinking what he meant, and whether it could even be true! And if so, how.

I think he probably meant a spiritual (not genetic) sense by which Jesus, by incarnating, became a-part-of the human condition. All Christians would agree with that, I suppose...

However, for Jesus's genetic material actually to have entered the human gene pool; presumably Jesus would have had-to have-reproduced while a mortal man; therefore he must first have been married. The obvious candidate is Mary Magdalene.

I find it plausible that Jesus did marry Mary of Bethany - who then became known as Magdalene. And if he married, then presumably it would necessarily have been consummated (to count as a real marriage).

So everything would then hinge on whether Mary became pregnant, then more generally on what happened to Mary Magdalene after the ascension of Jesus. I don't know of any potentially-valid source on this - but my feeling is that Mary would have followed Jesus soon-after, at least if she was not pregnant.

If she was, she would probably have remained living with Mary the Mother of Jesus and the Beloved Disciple ('John') (the group present at the crucifiction) and, I guess, brought-up the child...

Then, Jesus could indeed have entered the human gene pool!

But I strongly suspect that that was not what the preacher intended to imply...

The idea of Jesus and Magdalene having had children has been around for a while in "conspiracy" circles and has recently been popularized by Dan Brown's potboilers.

@Wm - Indeed, which was why I said "I don't know of any potentially-valid source", since such people are not Christians (e.g. they do not believe that Jesus died on the cross and was resurrected).

There are some very elaborate 'theories' about Jesus's descendents and their influence on history - this is quite an enjoyable talk I encountered that takes that line, among other things.

For a rather long period of time the claim to have a line of descent from Christ was a somewhat common feature in kingly genealogies. Who knows how many of these claims were false, the point is that the idea that they were entirely implausible is a later invention. I have my doubts that Jesus's wife would have played a major role in the Gospel accounts. It is likely enough that, during the time of persecution suffered by Christians after Jesus's crucifixion, His family would have been best protected by as complete anonymity as possible.

Of course, some early Mormon sources (including at least one prophet) advance the idea that Jesus had more than one wife. Certainly this receives some support from Christ's clear attractiveness to women evident in scriptural accounts.

It seems unclear what doctrinal import the question could have either way. If the bloodline of Christ did indeed come down to our day, what difference would it make? From Adam to Jesus Christ, and for a substantial fraction of the human race since, such lineage can have no effect on their salvation because they haven't got it. So is it important at all? Perhaps the apocalyptic prophesies may offer clues, but it is already difficult enough to make out what any of them really mean.

@CCL - "the point is that the idea that they were entirely implausible is a later invention."

I think your closing remark is correct - if true it would not be spiritually important. Which is another reason that I found the preist's remark so startling.

Well, it could not be spiritually important in a Christian sense, that comported with Christ's teaching and miracles (and especially with sacrificing Himself at a comparatively young age).

I suspect it could be doctrinally important, but God has chosen to withhold those doctrines from religion, probably because they are not spiritually useful (that is, if they were important, they'd tend to be important in the wrong way).

I think in Mormonism it is doctrinally minor, and spiritually unimportant. Christ was married and had children simply because that was the proper thing for a perfect man to do in life, just as Jesus learned a trade, and to read the scriptures, was baptized, and ate and drank in accordance with the principles of good health. This is a good and sufficient reason to marry and have children. We need no special doctrine to explain why Christ specifically would be baptized, other than to fulfill all righteousness. It would be reasonable to assume Christ would marry and have children for the same reason.

One could see the development of the doctrine that Christ could not have had any natural heirs (or collateral ones) as a defense of the authority of the Pope being above royal lines claiming such descent. In that sense, challenging that doctrine can be seen as a refutation of the historical authority of the Catholic Church (really, Catholics can hardly see it any other way). But quite probably it was nothing more than a confusingly vague metaphor.