Trapped in a simplified model: my own experience with natural selection 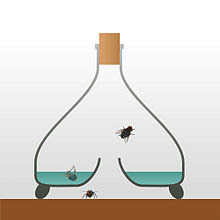 A Fly Bottle. The fly flies up-into it (by analogy, he unwittingly makes a metaphysical assumption); but gets trapped in the bottle - eventually expiring into the pool of water. He does not instinctively fly downwards, and never discovers the escape route (by which he entered). To escape, the fly needs to retrace the route by which he got trapped: that is, by analogy, to discover the metaphysical assumptions that led to his current deadly situation. Only by such a retracing and discovery could the fly revise his 'assumptions', overcome his short-termist instincts ('always fly upwards'/ always do what is immediately expedient), and thereby become free of their potentially-lethal consequences. Since 'the fly' will not do this for himself - the metaphysician must teach him to do it!

Yet, what I will describe here is how mastery of this theory included - for a long time - being trapped by the metaphysical assumptions of natural selection. Love became an infatuation which was (like most infatuations) destructive.

When operating within the theory of natural selection - when actually thinking with its assumptions, definitions and procedures - it was not possible to perceive beyond or outside it. And, since this theorising was the most difficult and high-level activity I engaged in, and since it was the major conscious focus of my life for many years (at least 15 years, full-on) this exerted a distorting effect on my whole world view.


The serious business began one afternoon in May 1994, sitting in a garden in the sun, reading an interview in Omni magazine with the evolutionary psychologist Margie Profet; and realising that that was what I wanted to do - and what I had, unwittingly, been preparing myself to do, since my middle teens.

I knew, after seven-plus years working in laboratories that: 1. I was a scientist, but 2, I was not an experimentalist - not from lack of aptitude, but from lack of interest. And 3. that theory was My Thing - I has enjoyed writing theoretical papers about my experiments far more than doing the experiments - and that is very unusual in biology.

(Biologists spend hundreds-fold more hours in doing than in thinking - and if that sounds like a criticism: it is! Doctors are even worse. Anyone in biology or medicine who has once spent fifteen consecutive minutes in really thinking about their subject, counts as an extraordinary egg-head.)

One of my greatest pleasures had been prolonged and deep conversations about biology - in the broadest and most historically-informed sense - with Dr Tim Horder, an anatomist at Oxford; where I would visit each year specifically for that purpose. I was already a doctor and a (sort-of) psychiatrist - but it was Tim that made me think as a biologist.

So, my problem had been how to become a theoretical scientist in biology; especially in a world where theoretical biology was almost-wholly mathematical-computational, but I was trained as a doctor. When I discovered evolutionary psychology, I discovered something I could do and that I was well-prepared to do - especially in relation to psychiatry.


I threw myself into evolutionary theory with immense energy and zeal - rising early to read books and papers, and seeking out people to talk-with and write-to. The learning curve was very steep, and I was writing theory papers within not-many weeks; and developing grandiose projects for changing everything...

In order to contribute to evolutionary ideas in biology and medicine, I needed to train my thinking to operate accurately within the constraints and according to the rules - and I became capable of both rigour and creativity in that field. The process led to many papers, and a book (Psychiatry and the Human Condition).

My interest in biological evolution by natural selection then broadened (strongly influenced by a computer scientist colleague, Peter Andras), and eventually became utterly abstract; as I moved into Systems Theory (of the type articulated by the German legal theoretician and sociologist Niklas Luhmann). This was (or could be understood as) an absolutely general theory of selection - understood (by assumption) as the primary and metaphysical reality. This shift was marked by the Appendix to my next book - The Modernization Imperative.

It was indeed A Theory of Everything - and I proceeded to apply it... well, if not to everything, then at least to a wide range of phenomena including university education and research, science, medicine, health services, management and modern society in general.

I was, in once sense, by now utterly trapped by my assumptions! I saw the world through selection-theory spectacles.

But, I had the advantage that although this was true at the level of habit; I was aware (thanks to this aspect of Luhmann being very explicit) of the nature of these assumptions - and that they were indeed assumed, and were not entailed.

And it gradually dawned on me that I was not compelled by these assumptions - that, indeed, they were intuitively unconvincing - and that they led to many consequences that I simply could not go-along-with... things like the destruction of all objectivity, and the impossibility of knowledge about anything (even systems theory itself, even oneself)!

Thus I was prepared and ready to change my ultimate assumptions, as I eventually did when I became a Christian; then again when I became (theologically, but not practically) a Mormon Christian.


That is where I am now - my interest/ obsession with natural selection went from biology, to general theory of complex systems, to metaphysics - to being focused on those first assumptions.

And I have developed a heightened awareness of the way in which we can be captured by our assumptions. The more we practise thinking within our assumptions, the better we get at doing so; but also the more prone we become to living as-if the whole of reality was actually nothing-more-than our simplified model-of-it.

Excellent piece Bruce! I find the fly trap analogy, in particular, very effective. I had never really heard of metaphysics until reading your blog but your posts have convinced me that a rigid set of assumptions can trap and enslave ones mentality. I would like to have thought that once the route out of the bottom of the bottle had been identified there would be a sudden and enthusiastic stampede for the exist. Alas, most casual-militants (an oxymoron if ever there was one,but that is how they behave in turns - idealist hippy one moment, fierce stalwart defender of the status-quo the next) that I know, who are atheists, who love a bit of Richard Dawkins and his apparent success of having sledge-hammered religious ideas into ridiculable irrelevence; well they dont believe in metaphysics when you tell them and get angry and defensive, and continue to cling at the top of the bottle where the cork is, oblivious to the deadly water trough below (they never even look down to see it). I find this blinkered response maddening and saddening but doubtless you must come across this all the time. I can almost understand this ostrich behaviour from an amateur who has been taken in from a few books but an expert? Why arent university department professors converting in droves? And I dont mean to Christianity, although that would be good, I just mean converting to recognising that assumptions are real and make all the difference to everything - and they are NOT necessarily fixed according to the tenets of modern evolutionary biology! I suppose that once you have made your career out of professional biology it is very hard to overcome lure of status, acceptance by peers, etc. and also, to admit that one was fundamentally wrong about something so fundamental, well, I dont know many intellectuals who do that.

What you describe for casual-militants makes clear that there really are those who will, knowingly and deliberately, reject salvation because they don't want it.

I had meant to ask you, in relation to this post, have you known any or many professional biologists or specifically evolutionary ones, to change their minds on this issue and embrace a religious perspective? I know that there are many historical examples of religious scientists but nowadays they seem an increasing rarity. I would have thought your personal example must have caused many of your serious thinking and honest colleagues to pause for thought. It certainly had a remarkable effect on me, as you know. The only way to get out of it would seem to play ostrich with your head in the sand and I assume that the hubris of the scientific community allows many professional scientists to do just that. I would love to know that there have been examples of others who have been able to re-examine their metaphysics and see the world with fresh eyes again.

@David - I don't know. So far as I am aware, myself and Greg Cochran are the only Evolutionary Psychology type people who are Christian.