Francis Berger continues his blogging hot-streak with a superb post from Hungary on Communism past, present and (so our Western elites plan) future. Edited highlights...

The current President of the European Commission who happily attended a ceremony [in Germany] commemorating the 200th anniversary of Karl Marx’s birth. Once there, the EC president gave an impassioned speech defending Marx’s legacy by claiming the communist founder should not be judged for the crimes his followers committed decades after his death. Mr. Junker also said, "One has to understand Karl Marx from the context of his time and not have prejudices based on hindsight, these judgments shouldn't exist." At the ceremony, Junker went onto discuss Marx's influence on the European Union, saying that Marx's philosophy taught Europeans that it was the “task of our time” to improve social rights. 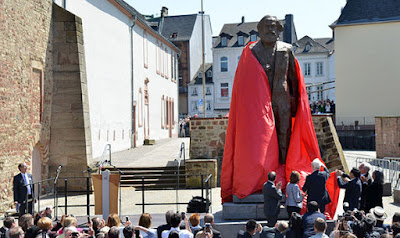 The Red Star is still alive today, and that it is comfortably lodged in the minds of the ruling elite. When the EC president speaks of improving social rights, he is essentially employing communist language and philosophy, which is perfectly fitting because, for all intents and purposes, a newer, modernized version of communism is all the European Union aspires to be.

Honoring Karl Marx and promulgating Red Star visions and policies today not only makes a mockery of communism’s victims, it also makes a mockery of God because communism remains the most inherently anti-religious ideology ever developed. Declaring religion to be nothing more than opium for the masses, communism placed humanity at the center of its philosophy and paradoxically, but predictably, developed into the most anti-human system the world has ever known. Yet, in 2019 communism can still be viewed as an admirable, desirable, and attainable political objective.

Of course, contemporary Red Star acolytes know better than to unfurl the old flags of communism again; they are well aware that even the most ignorant among us would likely oppose this. The word communism is never used explicitly, and whenever it is, it is quickly declared as something that exists only in the dustbins of history. But don’t be fooled. Communism has not died; it has merely changed its form. No, there will be no worker marches or hammers-and-sickles this time around, thank you very much. Instead, communism is being fed to the masses in a different form, under the variegated guises of leftist/liberal policies implemented through two of the old Party’s favorite vehicles – bureaucracy and the media. And guess what? In many areas, it is working.

This does not mean the majority of people in the West are on the cusp of surrendering to communism yet, but the current version of communism we are all suffering under has achieved something the oppressive, totalitarian red regimes of the past could only dream of – they have succeeded in driving God farther away from the hearts of Men. Being a Christian in the Soviet Union in the 1950s was regarded a defiant act of insurrection; being a Christian in the contemporary West today is regarded as a pitiable act of insanity.

Regardless, communists know one thing extremely well – religion, Christianity in particular, is poison to the communist cause. A true Christian is essentially inoculated against the communist virus. Those who claim to be Christian and communist are not Christians at all because the two elements simply cannot co-exist. Anyone who claims they can understands neither communism nor Christianity.

Thank you for posting this on your site, Bruce. I see you found a photo of the statue unveiling. Evil celebrated in broad daylight, that's what it amounts to.