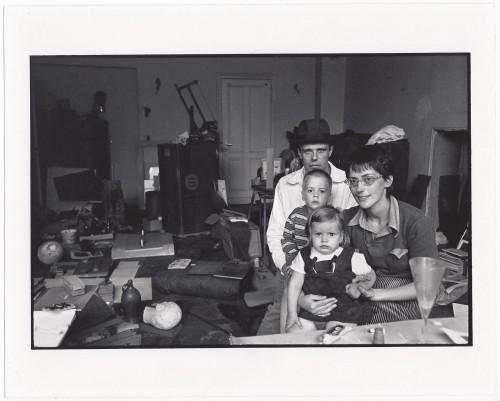 On the face of it, there ought to be nothing to interest me, and much to repel me, in the avant garde artist Joseph Beuys - whose art works were worthless and pretentious; and who has had a great deal of garbage and gobbledegook written about him by people for whom I have little respect.

I first came across Beuys when I say an exhibition at a gallery in Bristol, more than thirty years ago, which left me stunned by its triviality and attitude of servile reverence - if I mention that it included his toenail clippings in a display box, I think that probably says enough.

But somehow, for some (apparently) inexplicable reason, I have felt compelled to explore the life and work of this chap over the years; and have seen a fair bit of it by now.

I have never found anything of his which I thought was good, and almost all of it I regard as very bad - I don't think he had any discernible artistic talent, or less than most ordinarily-competent art students. Indeed, Beuys as good as acknowledged this with his most famous mantra that 'everyone is an artist' - implying he had no greater ability than anyone else. Furthermore, Beuys behaved like an objectionable poseur and guru; and seems to have been surrounded by worshippers for much of his later life - which is psychologically and spiritually a bad place to be.

And yet I cannot help but like the chap! - I seem to discern in him a good heart and a real Romantic Christian spirituality. Beuys was, indeed, an Anthroposophist who (unlike most) tuned-into the deep aspects of Steiner. There is Christian symbolism throughout - and it seems that he discussed such matters with his disciples (despite that they did not share his interest or beliefs).

I find my paradoxical long-term fascination and liking of Beuys to be a phenomenon worth dwelling upon. What seems to be going-on is that all the 'information' about Beuys is against him, all the 'communications' indicate little to appeal and much to repel... But my non-visual, non-verbal, non-conceptual 'direct' discernment tells me a different story.

From a materialist perspective, this is explicable in terms of Beuys's legendary charisma - eye-witnesses say that he was someone who simply compelled attention, fascination and admiration from many people; wherever he went, whatever he did. This comes across in photographs and movies, and in the way people talk and write about him... maybe I have simply tuned-into this?

Yet charisma usually dissipates inexorably after death. Later generations typically cannot understand why so much attention was given to the charismatic, when his works seem so mundane. Despite all of which, I am drawn - and more strongly with the years - towards the man!

There is a, widening, gap between surface and depth; between apparent and response - And therefore I tend to assume that this a spiritually significant phenomenon.

Is it then good, or bad spiritually? The basic trend of modern art is certainly evil, and Beuys seemed to do much to establish and amplify this trend. Maybe my fascination is 'demonic'?

However, in modernity, good impulse is often used for evil ends; and Beuys cannot be blamed for the fact that he never found an audience for his deepest concerns and meanings - that is, after all, the normal situation (and was also the case for Beuys's obscure artistic contemporary, William Arkle).

Could this then be an example of the presence of the dead? The idea seems fanciful - but the very dissonance between the surface and the depth; the fact that there is so little I like, so much I dislike, about what Beuys did artistically, may actually be the best evidence for it.

It's a working hypothesis... 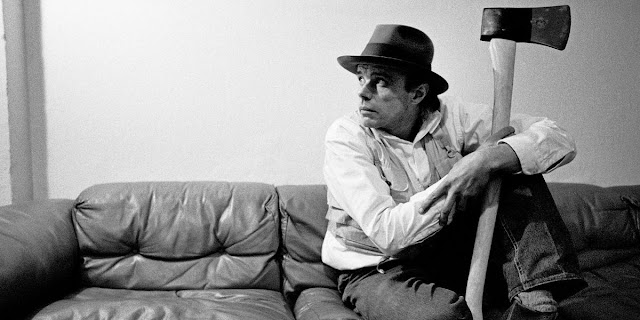