Gods under the ground, in the sky, in consciousness...

There are many prehistoric monuments in England - the earliest seem to be under the ground - such as West Kennet Long Barrow of some five and half thousand years ago, perhaps the centre of the religious landscape of that time... 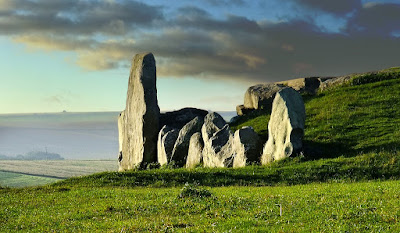 While somewhat later are the more famous stone circles such as Avebury (near to West Kennet, and part of the same 'ritual landscape') 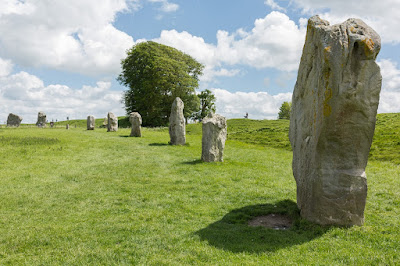 In general, through human development it has become more and more difficult to contact the divine. And this may be related to the assumed whereabouts of the divine.

Probably (there are no records), the earliest humans lived always 'in' the divine world - there was no separation between divine and mundane. Later, among the recorded simple hunter gatherers - contact with gods and spirits was more difficult; only attainable intermittently by a minority of specialist 'shamans' - who had to undergo some training, or else learn to use altered conscious states.

I would guess that the next stage - after the development of agriculture, and corresponding to the early Neolithic as at West Kennet - involved a professional priesthood, each of whom would experience a prolonged initiation. And also sensory deprivation and isolation - hence the underground sacred places.

(The Pyramids of Ancient Egypt are likely a highly developed version of this - the inside of the pyramid being the sacred space.)

Under-ground was also the place of the divine - corresponding to the intuition that the divine was 'within' everyone and every-thing.

The monument Seahenge had an upside-down oak tree at its centre - roots above the surface, trunk and branches projecting deep into the earth - perhaps linking the divine underworld with this mundane surface world... 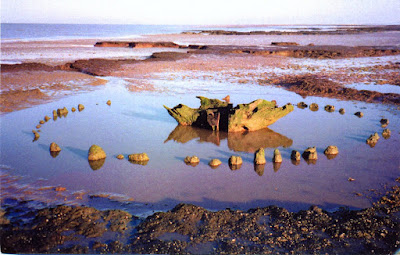 In the later neolithic, and into the bronze age - it seems likely that the contact with the divine became even more difficult - such that the gods were no longer experienced 'inside' - but in the sky, far away, imperceptible - and only indirectly and abstractly contactable by such methods as divination.

Hence the great stone circles (and pyramidal 'mounds' such as Silbury) were 'sky temples' - astronomically-shaped and aligned. I also assume that there was a supreme single god, by this time (henotheism); corresponding to centralised priestly government. 'Heaven' also means sky.

(The gods-under-ground, and god-in-the-sky temples seem to have co-existed for a long time - perhaps catering to different types of person; but the distinct impression is that the sky temples to the supreme god had the highest status, at least among the ruling group - since the greatest efforts were put into these structures.)

By this point, the kind of knowledge-based, abstract, priest-led religion was established which survived (gradually changing, becoming more theoretical and less direct) right through to the Reformation, and (somewhat modified) into modernity - after which it declined.

Until, from the advent of modernity (?1500s) increasing up-to nowadays, most people cannot contact the divine at all, under any circumstances - and deny its reality.

The idea of Romantic Christianity is that - starting with a few people from about the middle 1750s, and increasing, modern people are implicitly aware of the divine in a different, and individual, way; but which is not recognised as divine contact.

This is the process of conscious intuition, which I have often tried to describe on this blog. My understanding is that it happens to many (or most) people - but that nearly-always its validity is denied, and it implications ignored.

The modern sacred space is each Man's consciousness.

Note: If you are interested by the above line of argument, although not the specifics, you can find it superbly explored in Jeremy Naydler's The Future of the Ancient World, 2009.

The neolithic coves had been arable farmers for thousands of years, as they spread slowly along the Mediterranean coast and up to the British Isles. An underground God seems a reasonable thing for them. The Bronze Agers seem to have started their movement west from their home in the steppes of Ukraine and Russia where they had been pastoralists. It seems equally natural that horse-borne cowboys might expect God to be in the sky.

Unfortunately this notion is probably incompatible with the history of other parts of the world and their religions. Ah well.

@d - It seems that there was no division between the neolithic and early/ middle bronze age societies - they were the same type of society - large scale, apparently peaceful. In the late bronze age to iron age, England broke down into small scale villages/ tribes - and was like that until not long before the Romans took-over.

This may beb because, archaeology suggests, during the the bronze age - it looks as if bronze was almost entirely used for 'ritual' purposes, rather than as tools and weapons. (There is very little evidence of fighting, and a lot of evidence that there cannot have been much warfare - so weapons may not have been musch required.)

There are very large numbers of axes, swords, spear heads, daggers - but a large majority of them are found deposited (and almost unused) as apparent votive offerings, and in similar contexts (as 'hoards).

Whereas there are some, but not many bronze tools found in villages and workplaces.

So, it may be that although there was a considerable industry of mining copper and tin (including a massive copper mine in Great Orme from cBC 2000, which implies industrial organisation on a 'Roman' scale), the introduction of metal may have made no significant difference to the material-economic way of life.

In general, the impression from neolithic and early/midle bronze age times is that the focus of life was mainly spiritual - almost the opposite of the old assumptions.

Have you read The Origin of Consciousness in the Breakdown of the Bicameral Mind by Julian Jaynes? His basic idea is that until about 1500 BC our minds were "bicameral" and people operated according to voices – gods – that "spoke" to us across this mental divide. Religion and culture as we know it, Jaynes suggests, grew after the breakdown of this mentality. It's worth reading even if you don't accept his revolutionary thesis.

"there was no division between the neolithic and early/ middle bronze age societies": and yet the ancient DNA shows them to be distinct peoples, with the BAs replacing the NAs almost completely, at least among males, especially in the British Isles. It is interesting, I concede, that the BAs seemed pretty keen on reusing NA monuments and barrows and whatnot.

@Anon - (Please use a pseudonym.) The genetic data is based on very inadequate samples, which may explain why I had heard the complete opposite (i.e. that the bronze age influx left a negligible footprint on English DNA). But I think it is pretty clear that culture, genetics and language can all vary independently - presumably according to circumstances unknown.

@Avro - I heave heard about the book from reading Colin Wilson, and a review by Owen Barfield - to me it sounds like one of those 'half-right' books that are interesting, in some ways; but leave one unsatisfied... So I never tackled it.

Sorry, that anon was me.

"human migration did have an important role in the further dissemination of the Beaker Complex, which we document most clearly in Britain using data from 80 newly reported individuals dating to 3900-1200 BCE. British Neolithic farmers were genetically similar to contemporary populations in continental Europe and in particular to Neolithic Iberians, suggesting that a portion of the farmer ancestry in Britain came from the Mediterranean rather than the Danubian route of farming expansion. Beginning with the Beaker period, and continuing through the Bronze Age, all British individuals harboured high proportions of Steppe ancestry and were genetically closely related to Beaker-associated individuals from the Lower Rhine area. We use these observations to show that the spread of the Beaker Complex to Britain was mediated by migration from the continent that replaced >90% of Britain's Neolithic gene pool within a few hundred years, continuing the process that brought Steppe ancestry into central and northern Europe 400 years earlier.".

Even in modern Taiwan, the local god's are divided into sky gods and underground gods, with separate temples, identifiable by the number of bars on the windows.

@William - What differences are there between devotees of the sky and underground gods? Are the sky god devotees more 'abstract', less 'instinctual' in their aspirations?

I don't know anyone who is particularly devoted to the one rather than the other. Chinese gods are like Catholic saints; you pray to whichever is relevant to your situation.

Actually, I don't know anyone whose involvement in Chinese paganism rises above the level of casual superstition. The only seriously religious people I know are Christians and Buddhists.