Note the old English upper class pronunciation of vowels in the song at the end: 'man', head', 'tap' etc. Nobody (not even The Queen) speaks like that nowadays...

My childhood, from the dawn of consciousness (aged about four) to age nine, was a progression through the worlds of Enid Blyton.

The short stories about fairies and suchlike were there at the beginning, then came Noddy (we owned the EP record I have posted above), and at the end were the adventure books: Secret Seven, Famous Five, Five Find-Outers etc.

The phase lasted about five years, and then I moved onto more 'grown-up' books - such as the Lone Pine Club by Malcolm Saville, Narnia, Biggles...

But those years of early childhood are spun-out in memory, and were extremely intense at the time; so I have always been very grateful to Enid Blyton, and had warm and positive feelings about her. These were enhanced by my recognition of her extraordinary character and achievements, from reading the Barbara Stoney biography. 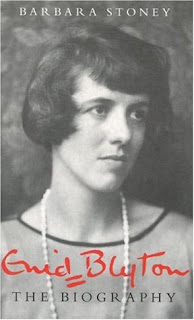 In all the photographs, from the earliest to old age, there is a dreamy quality in her eyes - reflective of her intense inner imaginative life. However, she was also extraordinarily hardworking (c 10,000 publishable words per day - about fivefold more than most professional authors, plus running several children's clubs, plus keeping-up a vast correspondence mostly with children...); and a very able and efficient businesswoman who was paid double the royalty of other authors.

Yet even as a child I became aware of a powerful strain of disdain and spitefulness directed against Blyton. This began in the middle 1950s, and has been maintained and strengthened since (e.g. the recent biopic).

The systematic denigration emanated from the higher levels of British society: the intellectual ruling elites and their willing minions in government and officialdom, in libraries, and among teachers.

There is no mystery to this hostility - at least not once you have recognised that the British intellectual elites were the first class to become corrupted into strategic evil. No doubt they correctly recognised that the most popular and prolific young children's author was a formidable enemy.

Blyton was primarily a story teller; but in 1949 she was explicit about her secondary aim:

I'm not only out to tell stories - much as I love this - I am out to inculcate decent thinking, loyalty, honesty, kindliness, and all the things that children should be taught.

Given that her works encourage values so directly opposed to those of the modern ruling caste; it is obvious why Enid Blyton's reputation has been treated so badly for so long.

Hear, hear Bruce. Enid Blyton wrote lovely stories for children of a certain age with an innate goodness and decency to them. No wonder she is treated with such superiority and disdain by the corrupted elite now.

Thanks, I passed her name along to someone I know with small children. Would you consider putting together a master list of wholesome fiction, suitable for children and teenagers? That's rare and precious information, especially now, in our window of book-buying opportunity before the Dark Age.

The interesting thing about Blyton is that she is almost the *only* great writer for the youngest children who can read to themselves. She stopped writing about sixty years ago (she died in 68, but suffered from dementia for most of the previous decade), and I understand she is still by far the most popular author in English (among children) for this age group - despite being so slighted, and some editions even subjected to destructive Leftist-Bowdlerisations.

Clearly, it is much more difficult (or, a much more unusual skill) to write for young children aged approx. 5-9 (depending on the child's intelligence and personality etc) than for the middle childhood age (8-12-ish) - which has most of the most famous and best children's authors.

The middle (and older) childhood authors are regarded as the best perhaps because the best of these middling childhood books are very suitable for adults to read - Narnia, Winnie the Pooh, Wind in the Willows, Harry Potter etc. (All of which I continue to read.)

Whereas Enid Blyton is probably too simple, or the young child's perspective too 'alien', to read primarily as an adult (I mean as an adult reading to himself for his own enjoyment - as distinct from reading aloud for children. This is another reason why Blyton is under-rated.

In terms of books that are 'good for' children, perhaps the main *generalisation* (as in other aspects of culture) is that most of the stuff before 1965 is good in terms of traditional/ Christian morals; most of the stuff afterwards is morally bad (i.e. being subversive, inverted, or strategically-evil propaganda) - and the more recent (and more critically-acclaimed) the worse.

I read lots of her stuff and remember nowt about it. The brilliant writer, for me, was Richmal Crompton: wonderful stuff. Better even than Biggles.

Individual books that I liked included Children of the New Forest, Swiss Family Robinson, The Coral Island, and Emil and the Detectives. The Water Babies was a stinker.

I also enjoyed the boys' comics that consisted of printed stories rather than cartoons: Rover, Hotspur, Wizard, and a fourth. The Eagle was over-rated. There was a dreadful thing called The Childrens Newspaper which I persuaded my father to cancel. There were also lots of comics with cartoon stories about The War: those comics were traded on Saturday mornings before or after we went to "the pictures" to watch westerns and dreadfully unfunny American comedians - the Three Stooges, and Abbott and Costello. Come summer, of course, "the pictures" tended to be abandoned in favour of camping, tramping, and swimming in the river.

One great disappointment of my childhood was how feeble The Children's Encyclopædia was - an ill-organised shambles. I took to going to the public library to look things up in Proper Encyclopædias.

For the summer when I turned fourteen I had to read Trevelyan's trilogy on the Risorgimento: our history teacher had instructed us all not to be fascinated solely by Garibaldi but also to keep an eye on Count Cavour. I assume that few thirteen year olds would be assigned summer reading nowadays. And yet even then it occasionally rained in the summer holidays: a boy should have some reading to do, don't you think?