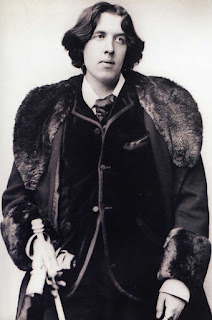 Wilde certainly did not invent English facetiousness, but permanently re-established its fashionability

The facetiousness of the English intellectual class is a genuine National characteristic. It can be seen in the triviality and unrelenting forced wittiness of every-day conversation in the universities (from the newly arrived student to the senior professors) and in mass media - from the sniggering of TV and the tabloids, to the glib smugness of elite productions such as the Economist and the Financial Times.

It is found in medicine, law, and all the professions. And it has spread to include more people all the time.

Facetiousness is high status, and earnestness a sign of unintelligence and/or dangerous fanaticism.

But facetiousness is something that precludes genuine attainment - and for the best artists, musicians, writers, creative scientists etc, facetiousness was a pose that needed to be dropped when serious work was afoot; only to be resumed when 'normal life' was resumed.

So, facetiousness made the intellectual class radically and ineradicably two-faced, and unintegrated as personalities. It was what made many of the great geniuses of England intolerable as people to the geniuses of other nations (e.g. cultural Germans such as Wittgenstein, Karl Popper). And intolerable to working class geniuses (such as DH Lawrence and Colin Wilson.)

Indeed, probably the reason why I have always noticed and disliked this aspect of Englishness is that I have the hereditary earnestness of someone from a working class background.

And this lack of integration, further, was a weakness at the heart of English life since the terrible religious civil wars of the seventeenth century.

My guess is that this facetiousness emerged in the period of the Restoration (King Charles II - for instance the 'Restoration comedies') and became dominant in the middle 1700s (the author Laurence Sterne was an exemplar).

My interpretation is that it was related to the rise of the Romantic impulse, which came first among the upper classes - then worked down. Facetiousness is a denial of Romanticism, a keeping-in-place of Imagination, so that imagination would not disturb the growing materialism; the growing pragmatism, bureaucratization, scientism which underlay Britain's rise as a world power and the first industrial nation...

The positive excuse for facetiousness was probably to avoid the religious wars. The rationale was that if religion was made a superficial matter, then it would not motivate people enough to fight about it. This was true, people were thus demotivated; and it was effective in that specific goal.

(The lower classes found this intolerable, and there were several nonconformist (i.e. not state religion) revivals among them from the late 1700s onward. But then they, too, were incrementally affected by facetiousness - perhaps mainly via the mass media and the sexual revolution.)

But the demotivation did not stop there - far from it - it became all-pervading (esepcially after 1945, and more so fater 1967).

Because we have a national ethos of facetiousness, the English (and British more generally) are probably among the most demotivated people in world history. And therefore among the least able to learn from spiritual experience.

This goes along with the endless banter and constant need to laugh and refusal to take serious things seriously of modern English life. We're frightened of depth because it requires something significant from us so we hide behind facetiousness.

@William - It is indeed an evasion, on many levels. An evasion that has hardened into strategic dishonesty.

I think this brings in the notion of irony, which seems like a dead end in one's progress but maybe a necessary stage for some. I think creative and intellectual types lose conviction and earnestness on the way, and instead of becoming more humble, they become ironic in both a defiant and defeatest sort of way. Some may get past this, and surrender to something Higher.

From one Englishman to another, thanks for writing this. It rarely gets spoken of, and needs to be spoken of in order to be remedied.

Unfortunately this inability to be serious and engage with the world makes us more disconnected from it. Everything is assumed to be known and is then reduced to nothing more than an amusing triviality. We become spectators rather than agents in life. Kind of like the popular TV series QI, where aloof comedians make irreverant remarks about interesting titbits of information.

Here's a hobbit standing in for the English nation in the Third Age of Middle-Earth:
"It is the way of my people to use light words at such times and say less than they mean. We fear to say too much. It robs us of the right words when a jest is out of place."

@Karl - I'd say that Ted Sandyman was more of the typical English intellectual, in this respect.

Romanticism and the related latent potentials of mind are typically suppressed. In Colin Wilson's work it would be the left brain fighting the right brain, the left intellectual thinking itself all there is, like an inflated god.

Institutionalized intellectuals do similar suppression in different forms everywhere. Look at what happens to Rupert Sheldrake and you will see the same with Dean Radin or Jason Reza Jorjani in the USA.

Jeffrey Mishlove in his Thinking Allowed series observed that only a few hundred years ago witch-burning was going on.

The witch mania was in the 1600s leading up to and around the time of the Restoration. Tens of thousands of witches were executed.

People may have had a conditioned response to the witch-burnings and didn't want to think about what it might mean, especially the fact that large numbers of people were regarded as having significant alternative powers and that they were then systematically murdered for it.

@FX - wrt 'witch burning' - it makes a difference whether one believes that there really are such people as witches, and whether some/ many of them are evil. A further question is the extent to which real-evil witches were involved in a conspiracy of evil.

Modern people (supposedly) believe that the whole thing is nonsense* and all persepction was therefore based on false assumptions. But n past days, almost 'everybody' believed in the reality of witches - and the main questions were how to detect them and what (if anything) to do about them.

In the Middle Ages nothing much was done about witches - perhaps because people felt that the devout were not susceptible. It was in the early modern period, the 1600s onward, that witches were persecuted.

The numbers involved in witch persecutions and killings were massively inflated by the early 20th century scholars such as Margaret Murray.

*But a significant number of very high level and poweful people in politics and the mass media (eg popular music) engage in what look like witchcraft occult practices, many of which appear evil in form and intent (to a Christian) - for example, Hillary Clinton recently acknowledged she is a coven member. She is not likely to be unique, and there are many other examples which seem to be well attested. So perhaps it is truer to say that the middle management level of modern society disbelieve in the effectiveness of witches and witchcraft; whereas the elites and masses often believe in witchcraft of one sort or another.