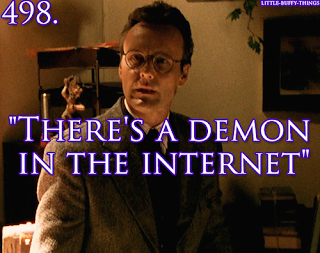 You can't say we weren't warned... from an episode of Buffy the Vampire Slayer

A fascinating post called Computers and Demons from William Wildblood . He opens up a discussion on whether demonic spirits may, in some way, be using the electromagnetic mass media as a way of influencing the world.

I think that the computer revolution has been driven by demons. It has certainly been captured by them but it was probably instigated by them too... If the IT revolution is demonically inspired the question is why? The immediate answer might be to distract people from the spiritual and make them more susceptible to evil using that word in its broadest sense to mean anti-spiritual...

But is there more? It seems to be the case that the demons cannot take physical form except under certain very particular circumstances and for brief periods... Demons would probably like to incarnate directly on Earth because this would give them greater power over us. There might also be something about being in a body that they covet.

Might the drive towards artificial intelligence, quantum computing and developing computers that are carbon-based actually be all about enabling demons to incarnate? ... What if the true purpose of the computer revolution, the end game so to speak, was to enable the incarnation of demons in this world? Is this a possibility we should start taking seriously?

This looks like an important insight. For example, it seems to fit with the frantic urgency with which the global Establishment are pushing ahead with 5G. Perhaps the aim is that 5G, potentially via the network of interconnected, externally-controlled and -monitored 'smart' devices that has infiltrated and been forced-upon so many homes and workplaces, is to be subject to some relatively direct demonic influence?...

I am unclear about the mechanism with which this might work; indeed I don't think we need to know such details. However, (according to the historical delvings of Jeremy Naydler) there has been a traditional understanding of electricity (going back millennia) which regards it as an inhuman and sinister phenomenon.

It is possible that such ancient wisdom had more truth in it than is apparent from a reductionistic scientistic perspective which sees electromagnetism only in terms of its potential convenience, usefulness - and as a means of amusement and the medium of virtuality.

In a time when things are coming to a point, it seems likely that our choices will be stark; and the cost of avoiding damnation (after two centuries of collusion) may be extreme.

It is an interesting speculation. There is no doubt in my mind that demonic powers are using and will continue to use technology to influence/subvert humans, but I don't think demons will be able to physically manifest within the technology itself, regardless of how much carbon it contains. Perhaps they can take control of the machinery for short periods of time, but I have a hunch they cannot, and do not want to, manifest within machines for extended periods of time.

In my mind, they are more interested in influencing the people who create/control these systems, and are more than happy to let those people do the dirty work for them. Of course, this is all just speculation, and I could be terribly wrong, but that is my gut-feeling.

Note: I left this comment at Meeting the Masters as well.

@Francis - I don't think we need to try and understand what literal mechanism 'incarnation' might take (especially not without first making some considerable sustained effort) - but simply to think about the idea that, in some sense meaningful to demons, something about the electronic computer medium may be more-directly usable.

Perhaps the idea is to create a complete (demonic) system of virtually-augmented reality to overlay God's reality. A totally evil society might be able to sustain itself for eternity, if the evil citizens interact successfully with physical reality via demonic VR.

So - in the real world, they go to work and reproduce and obey the law, but their perception via demonic VR contact-lenses, ear-buds etc. is that they're living in Bosch's Garden of Earthly Delights.

No-one does anything physically evil - in fact, they do quite a bit of physical good - but their virtually-augmented perceptions, free will, and spiritual development descend toward Hell forever.

Or at least until the next solar flare.

@Bruce - I doubt anyone could fully grasp what the literal mechanisms of demonic incarnation within technology might entail, but that's not the main point here. The title of the post posits a question, and my speculative answer to that question is a firm 'no.' This is not based on physical/technical considerations, but rather on metaphysical assumptions of how demons operate. Demons could use technology as a weapon (and likely do so now) without needing to manifest within the weapon itself. Simply put, technological incarnation is superfluous. The aims could be achieved without the need to actually inhabit the technology.

@Francis- Yes, metaphysical assumptions. Mine are that there is no qualitative difference between spirit and matter - spirit is Not absolutely 'immaterial'.

Ultimately incarnation is about something like concentration and boundedness, on a continuum between the most spiritual, diffuse and unbounded, and the most material, concentrated and bounded. So there are degrees of incarnation.

Therefore (from these assumptions) even if it is a fact (as I believe) that demons cannot incarnate as Men, and therefore cannot resurrect; this does not preclude other forms of partial incarnation.

Indeed, I assume they must be somewhere on that continuum towards matter, because that is how spirits 'interact' with the material world.

The Roman Catholic metaphysics (from Aquinas, and before him Aristotle) is that there is an immaterial realm, and doctrine states that angels (hence demons) are immaterial - not material At All.

So, from those assumptions, demons cannot incarnate At All.

But my own assumptions are wholly different. For me, Men and Angels (and God) are on a continuum - all of the same 'kind', all types of Men. I think that demons are a type of pre-mortal angelic spirit, as we all used to be.

"There has been a lot of synchronicity lately about a thing that may be called "computational spirituality". Computation, turns out, may be a thing not just limited to human-made computational machines. It may be happening on other levels, and by other laws and influences.

"Can a demon gain access to computation? Possibly. With a mind much faster and with unlimited time, you can imagine demons would turn out very good hackers...

"Now, I am quite certain that if computational properties are a part of nature, then they are not available simply as a demon playground. I bet there are other "programmers" out there making it more difficult for the hackers.

"I am not sure if demons can incarnate, but how about editing some DNA on a very deep level? The Antichrist will have to be born, that is - have a body. He - or it - may be human, but an edited human, a pre-programmed, hacked body.

"In other synchronicities, electronics glitch even faster today, after about a year of use. Get replaced faster by more powerful tools. And partially, get hijacked for computational tasks. A quantum computer is also in the works, to make things faster.

"And whenever there are demons, there are also saints. A Greek monk from Athos, St. Porphirios, is also the saint of electronics and smartphones... there may be many levels of programming available - either with human help, or some form of direct interaction with matter, as in quantum computers. But whenever there is a demon playground, there are also angels and saints. So yes, we may be having demonic cyber warfare. There's always some form of warfare."

Fine we’ll be able to hack them. Send them into a virtual abyss.

@Sean - I like your attitude! We should not be intimidated.