Field of Dreams (1989) and literalising the yearnings for Original Participation 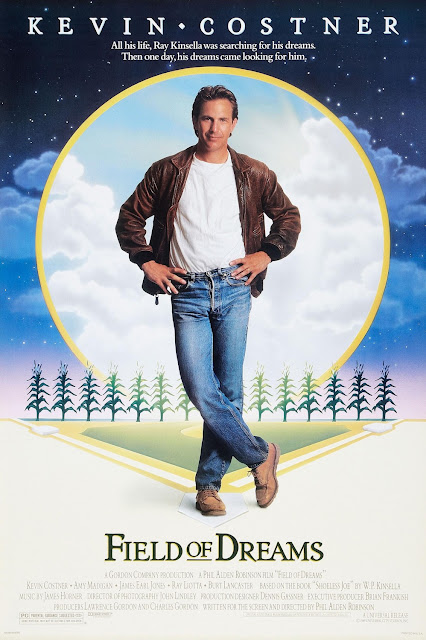 Field of Dreams is a movie I like - I rewatched it recently to check. At the time I first saw it, which was perhaps 1991, it coincided with an awakening of yearning for what I would now regard as Original Participation. In other words, I sought meaning and purpose in life in something like a return to the consciousness of early childhood of early tribal Man.

Original Participation is participating in the creative love of the universe by a passive immersion in it; in the way that we all did in early childhood. And this is what the Field of Dreams 'dream' is about - it is about recovering and reliving that child's-perspective; by watching baseball games featuring  long-dead players, in an idyllic situation which literalises a common set of yearnings and fantasies.

That is what I wish to emphasis. Much 'fantasy' is popular because it suggests that 'if only' we could literalise our fantasies, then we would be perfectly happy forever. Of course, they are seldom foolish enough to state explicitly the idea that any kind of external objective situation would really make us perfectly happy forever; but that is what innumerable works of art (novels, plays, movies, tv series) show us.

In Field of Dreams we are shown a man who (obediently) follows his deepest promptings (in the form of an hallucinatory voice, unsought), and is rewarded by what looks to be a wholly satisfying life (with his wife and daughter; and an expanding circle of aficionados, who pay him for the privilege and continue to make it possible...) of watching old-time baseball and tending to the ball park where it happens.

Or, as the movie blurb has it: His dreams came looking for him.


Thus, the 'lesson' is that our destiny comes to us from externally, as a perceptual communication; and our job is to obey it - the reward is to be 'made' happy. It is the theme of so many fantasies; If Only (we think) fairies, Middle Earth, Hogwarts or whatever were literally true and I could live there, or meet them - then I would have a wholly-satisfying-life.

Yet, the stark reality is that if we had everything we wanted; exactly as we most want it - if our fantasy situation was literalised - it would pretty soon cease to be wholly-satisfying. We would get used-to-it; and probably we would get fed-up of it.

Watching the Chicago 'Black Sox' ghosts play every day, a couple of times a day, while feasting on hot dogs would certainly be great At First... but it is very far from enough!


For post-adolescents the fact is that a literalisation of Original Participation would not suffice, and we only suppose it would suffice because we know it cannot happen. We can daydream that the Field of Dreams would 'make us' perfectly happy forever, because we know it wont happen - this the illusion is maintained, and may harden into delusion.

(I mean - and this is a position I personally reached before I became a Christian - we may come to believe that the best possible life would be a benign delusion; that is, something gratifying but untrue that we nonetheless believe. This seems to be the logical conclusion of atheistic hedonic materialism; and is the underlying reason why transhumanism is becoming mainstream; since that promises that technology will provide us with a life of benign delusion by means of drugs, genetic engineering, virtual reality etc.)

This is the way in which we - modern Men - are maintained in a state of spiritual paralysis. A bureaucratic, materialistic, totalitarian ('Ahrimanic') machine - such as Hollywood, big business and the mass media - produce multiple ('Luciferic') dreams of passive, immersive Original Participation; which we yearn for but which we know cannot happen... We simply try to spend as much time as possible living 'in' these dreams; in the (shrinking) gaps between serving the machine.

The sixties showed, and the lesson has been confirmed multiple times since; that we are not going to be able to return to Original Participation, that we don't truly want to; and most importantly that even if we did, it would not suffice.


We simply must find a third path into the future - that which Barfield terms Final Participation. This is the state we can confidently hope for in Heaven; but also a state which we can inhabit and cherish for periods of time, and rather imperfectly, here on earth - as part of that learning from experience which is our task.

Because, on closer examination; even the daydreams of Original Participation have elements of Final Participation about them; they are often highly conscious, active rather than passive, exist in the realm of thinking rather than inarticulate Being, and are developing situations into which we bring creativity from our-selves.

If we recognise that our goal should not be a static-suspended-state of blissful passive immersion with minimal consciousness; but instead a process of participating and joyful active creation with our unity attained in the world of thinking - then we are most of the way to where we ought to be.

To pursue happiness is folly. It is like trying to capture sunlight in a jar.

"Shy wildflower found, peaking up from winter's bed.
Serendipity!
Seeing you after so long, a brief collision of joy."

Rather than trying to be happy, be engaged and open to what will cross your path. Something wondrous will, but only if the state of mind you have is open to "I know not what, coming from and going to, I know not where."