Implications of the Crystal Set Radio 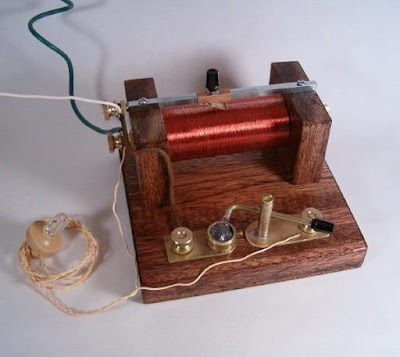 When I was about seven years old, a friend showed me a radio receiver he called a Crystal Set. This was the middle 1960s, and there were amplified valve radios plugged into the electric mains in all homes, and battery powered portable transistor radios becoming increasingly common (although generally not owned by children).

But this Crystal Set was extraordinary. It was small and had very few components - too few, it seemed, to be able to do anything like pick-up a radio signal. But what amazed me, and in a sense changed-the-world for me, was that the crystal set had no source of power - no battery or anything. You simply made the set, tuned it, listed to the ear-piece - and then you could hear what was on the radio channel: music, speaking, weird noises...

At first this seemed like something-for-nothing - a real life perpetual motion machine. Somehow the speaker in the little ear piece was generating sound, without any power.

Later on it began to dawn on me that the power must be coming from the radio waves themselves, from whatever broadcast radio program I was listening to; from the energy with which the radio station was being broadcast via an antenna somewhere.

The Crystal Set was picking-up the radio waves, both tuning-into them and and also using the energy of the radio waves to power the tiny loudspeaker.

This was both exciting and troubling. I realised that I was, all the time, being bathed in radio waves that had power, energy, information - these were going-through me; All The Time (at least, wherever a radio signal could be detected).

I found this very strange to contemplate - and still do.

Since it is a rule of Life that one never gets something for nothing, this must be a trade-off. If there is enough energy in radio waves to power an ear-piece there is enough to do other stuff; most of it, on average, bad stuff.

And there is, of course, manyfold magnitude more energy from electromagnetic waves going through me now than there was fifty years ago; and a great deal more planned for the near future.

That Crystal Set seemed to have the whole essence of electromagnetism in microcosm - the obvious marvel and usefulness of the device, and the occult, implied... well, something else.

I remember building such a crystal radio as a child the the early 70's. The only active component was a single diode. The miracle came as a result of resonance between a variable capacitor and a hand wound inductor made from a paper towel holder.
I've learned a lot about electricity in the years since, but the sense of miracle remains. One though that helps put my mind at ease is that E=hf. In plain language the energy of a photon is directly proportional to frequency. This is why high frequency ionizing radiation like X-rays and gamma rays cause cellular damage while low freq. long wavelength fields like AM radio and power lines are thought to cause no damage. Do we really know this? Modernity has brought with it a host of ailments from cancers to tooth decay. How many of the illnesses are caused by electric or magnetic fields, and how many are caused by hydrogenated oils, and fructose? I'll keep my electricity and air conditioning and cut back on the processed food, but we really need some studies on this.

I will never forget the time I spent a few days out in Glen Affric up in the wilds of Scotland. We were at least 40 miles from any power lines at the time and spent the night in an old bothy. The air felt thick. Like walking into some density. A storm came that night and I could feel it approaching via the hair on my arms.

I've never felt that before. The absence of any electricity was obviously having an affect.

@John - I suppose one should say relative absence, by modern standards - because it is everywhere and at high levels, compared with the pre 1800 background level. Myabe deep underground, or in an enclosed metal cage, we could escape?

Probably unable to escape all frequencies now as they plan to blanket the planet in 5G via satellite. Perhaps deep underground which of course would then bring its own problems to contend with.