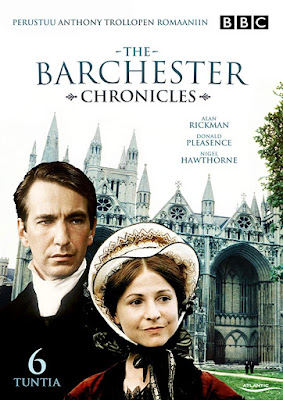 I've been watching the 1982 BBC TV adaptation of volumes one and two of Anthony Trollope's Barchester Chronicles. These are set in a fictional idyllic English Cathedral city in the middle 1800s; and I found that I was expecting the characters to fit the usual stereotypes familiar from modern TV and movies.

But Trollope does something very interesting and unusual here. The story is about the activity of political radicals in Barchester who propose a variety of reforms to the church. The Church of England is depicted as staffed by idle, nepotistic and corrupt upper class men; who get large incomes for little or no work.

For example, the Warden gets 800 pounds income from a hospital for a dozen old men, a position that has no duties. The Canon of the Cathedral has been living the high life with his family in Italy for more than a decade.

As a result of the radicals activities, the hospital is doubled in size to include old women; and has a Sunday school added and regular church services. The Canon is made to return and work for his living.

This is exactly the kind of plot we are familiar with from countless dramas - corrupt conservatives versus idealistic leftists...

However, Trollope provides a rare - but realistic - twist; because the corrupt conservatives contain all the kindest, most sympathetic - most truly Christian characters. The Warden himself, Mr Harding, is almost a saint; the only person who is capable of loving self-sacrifice.

While by contrast the radicals are a mixed bunch of dislikable, or inconsistent, folk - as indicated by their Dickensian names. Dr Bold - a gullible idealist who betrays his wife's family to the rabble rousing London press; Mrs Proudie - the new Bishop's snobbish and tyrannical wife; and the Bishop himself - weak, vacillating, without principles. And the vastly odious Obidiah Slope - the Bishop's hypocritical and scheming Chaplain (played by Alan Rickman in his first big impact role).

The result is a state of complex ambiguity in which the 'cause' is separated from the nature of motivations of the people; in which apparently high ideals are shown to have adverse consequences, in which the pursuit of public good is a mask for a more cynical, and overall more damaging, form of corruption than that which it purports to address.

Mrs Proudie and Mr Bold can indeed be seen as proto-SJWs, engaging in early examples of what we currently term 'virtue signalling'!

In brief, Trollope succeeds in writing that rarest of stories - one in which the nice people are on the 'wrong' side, while those who hold all the 'right opinions' are shades of nasty. More importantly, Trollope has the ring of truth about it - and (broadly speaking) very probably represented the actual situation in that era.

As a real life example, reading Ralph Waldo Emerson in the pre US Civil War years, it is clear that the activist Abolitionists were a bunch of monomaniacal fanatics - either very boring, or psychopathically dangerous. The nice and kind people were nearly all on the side of the status quo. Indeed, Emerson had to overcome a strong personal repulsion against the Abolitionists before he could embrace the cause of anti-slavery. And, of course, the actual consequences of coercive abolition were, in many respects, extremely bad - not least the killing and maiming of a very high proportion of the population. Yet such realism has become intolerable to the modern mind - we must have our slavers as nasty, and our abolitionists as saints.

So we get the paradox that mainstream middlebrow Victoria story of small town, upper class life is more genuinely tough-minded and truthful than the grimy sordidness of modern productions. But then, modern people mock the up-front and principled Bowderlisations of Victorians (designed to protect the innocent), while dishonestly imposing their own censorship in favour of moral inversion and the corruption of children.

So it's all of a piece, really. 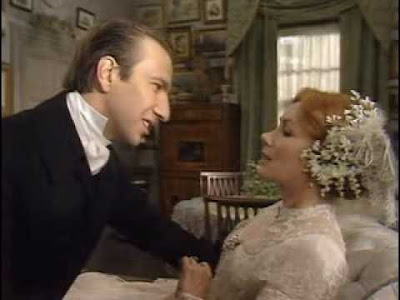 The slimy Mr Slope - low churchman and bachelor and proponent of puritanical public morality, gets rather too flirty with a married lady...
Posted by Bruce Charlton at Monday, October 14, 2019

But everyone knows that right wing politicians treat their staff, and their constituents, better than do lefties. I don't suppose it's a universal rule but I do guess that it's a good generalisation.

As for the abolitionists: I have asked Americans whether they still sing a song in praise of the terrorist John Brown. They always seem uncomfortable. What about our own abolitionists? Were they a bad lot?

Thank you for this interesting post taking my mind into Joanna Trollope and this BBC 1982 show. I don’t read books or literature and this is an interesting glimpse inroad. Though I do like some bbc shows. Remains of the Day by merchant ivory really captured my imagination what a magnificent film, and kazuo Ishiguro s book is one of the few I’ve read. Alan Rickman is was a great actor too. Interesting observations in your post above too.

@d - One would need to read a contemporary account by someone whose evaluations you trust. I have read such a lot of Emerson (and his contemporaries around Concord) that I feel as if I know them personally. I don't, as yet. have a similar interest in the period of English history during which abolition emerged, although I've read a couple of books about abolition - which were pretty surprising.

This made me think a lot, especially in the context of your earlier posts about how nice people are not necessarily good people, Jesus was nasty, etc.