Why Father Christmas is real 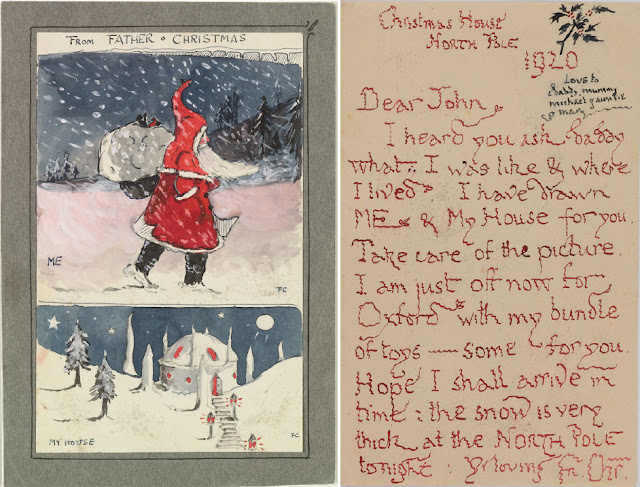 I have long had the conviction that Father Christmas is real. I stick by that - and indeed believe that Santa is getting realer with every year.

This is happening because the mainstream culture is more obviously and more intensely anti-Christmas (as part of being anti-Christian - as its core, demonic, value); so the value of Santa is ever easier to discern (this being yet another example of things coming to a point as the end times develop and good and evil separate).

Not to keep you in suspense: Father Christmas is an archetype of God*, in one of his primary aspects - as our loving and benign Father, bringer of joy, giver of gifts; and as such not only is Santa real, but one of the realest things we will ever encounter.


Here and now; Father Christmas can be real only to the extent we acknowledge (whether unconsciously or explicitly) the reality of the God of Christians - of whom he has evolved to become a specific archetype.

And to such persons, Santa may have a spontaneous reality that may powerfully overcome mistaken resistance - based upon such errors as regarding him as a pagan or demonic spirit.


This struck me as a consequence of reflecting on our cultural extremes of The Magic of Christmas versus what might be termed Christmas survivalism: the idea of Christmas as an ordeal that must be got-through best as possible.

A variant of Christmas survivalism is to subvert the magic of Christmas by explaining-it-away historically, or inverting its values, or regarding it as no-more-than an exercise in systematic self-indulgence; such as the ritualised sybaritic-hedonic-nihilistic excess of 'the office party'... In other words, to deny the reality and significance of magic, by substituting immediate pleasure for magic.


I've experienced both in myself, and can easily see that the attitude to Christmas is a barometer of spiritual well-being, of being on an upward or downward path. The analogy of Santa with God is close in terms of the Christian and the atheist inhabiting the same sensory-world; but perceiving different aspects ad drawing different conclusions.

The large and heterogeneous totality that is the phenomenon of Christmas is that which confronts us; the question is what we personally draw from that totality.

In other words; the magic is there, it is a significant part of the phenomenon that is Christmas; what varies is whether we are able and willing to experience it. And that depends - ultimately - on our basic assumptions regarding the nature of this world (i.e. metaphysics).


If we accept the mainstream Leftist socio-political ideology that this universe is dead 'physics', non-conscious, a product of chance and determinism; then all values (including truth, beauty and virtue) are arbitrary constructs of a brief-living organism...

Well, natural Christmas can have no real magic on such a basis - nothing can have magic, because magic is defined as impossible by assumption.

On the negative side Christmas is a time of a tedious obligations, commercialism and hypocrisy. The best that can be said about Christmas from such a perspective is that it can be an excuse for 'partying' to a greater extremity than is usually tolerated.


But when our assumptions are such that we regard this world as the creation of a God who is our loving parent who made this world for our personal good...

And if, further, we regard Christmas as the celebration of the birth of Jesus who was 'first' son of our father the creator; and who came to this earth to bring us the great gift of eternal life in heaven on the other side of death - thereby bringing permanent meaning and purpose to our mortality...


*And as such, real. Because an archetype is a reality - not the totality of reality, but reality as known to a limited Being such as ourselves. Often, archetypes are, indeed, the only realities we can know.