Alasdair Gray (subject of my MA thesis) has died 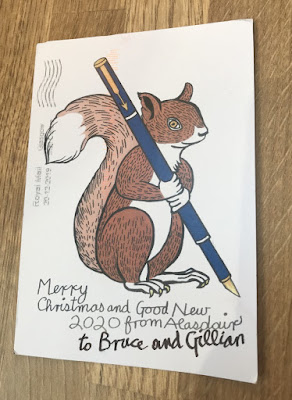 This year's characteristic, home-drawn and printed Christmas-/ post-card from Alasdair

The Scottish writer and painter Alasdair Gray - who was the subject of my 1988 MA thesis at Durham University, and my friend for a decade around that time - died about a week ago. He lived to the age of 85, which was considerably more than would have been expected when he was an unhealthy child (hospitalised and nearly dying from asthma several times) - or indeed a wheezy, overweight adult who too-often drank too-much.

Alasdair is regarded as one of the major Scottish writers of the past century - mainly for his first novel Lanark (1981); which is in the modernist/ post-modernist genre - a hybrid work: realistic semi-autobiography sandwiched by the two parts of a SciFi dystopian fiction, both sharing an indirectly related main character. And an embedded 'Epilogue' where the author comes on-stage to exchange banter with his protagonist (and confess to the multiple stolen ideas or 'plagiarisms' deployed through the novel). The whole embellished by the author's very impressive illustrations (which often look like parody/ pastiche ancient engravings). 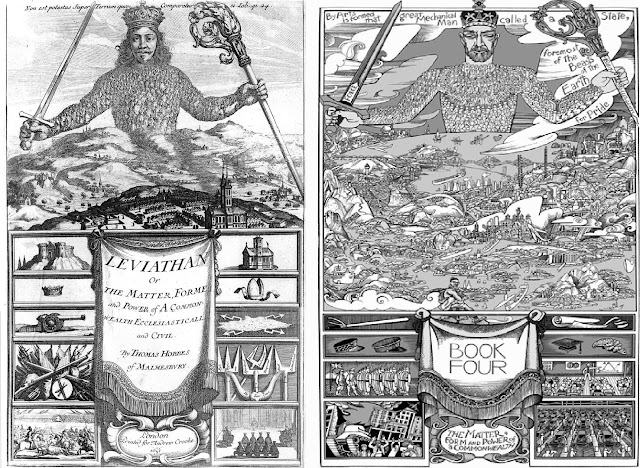 From Thos. Hobbes Leviathan on the left, Gray's version from Lanark on the right

I bought a copy of Lanark in 1982, during perhaps the most 'miserable' year of my life, and went to Glasgow to buy a print of some of the artwork; and met Alasdair for the first time. Alasdair turned out to be the most eccentric person I had ever met, very genuine and kind, very funny, extremely interesting, and enjoyable to talk with.

His books' subject matter, his general artistic stance, his (socialistic Scottish nationalist) politics, all suited me at that point in my life.

And five years later, when I decided to do a one year research thesis - he allowed me to work from the collection of his diaries and journals in the National Library of Scotland; which meant that much of my work was published in The Arts of Alasdair Gray (1991) for which I also provided a short biography. So, for a while I was The expert on this author.

When I went to live in Glasgow in 1989 I saw a lot more of Alasdair and helped out with a couple of his later books - Poor Things and the Book of Prefaces - for which I was duly credited in the detailed acknowledgements (and 'plagiarisms') which had become something of a trademark. 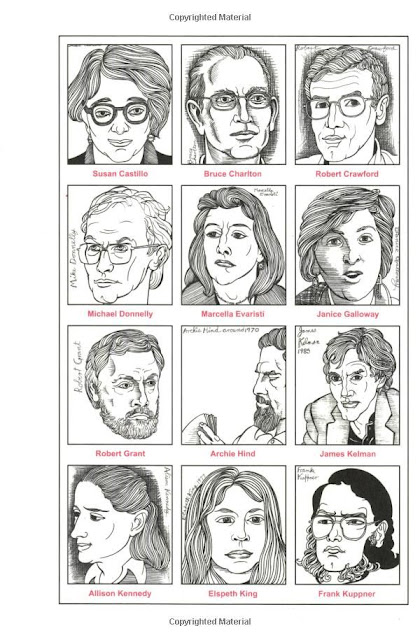 I am top centre, having helped research the Malthus and Darwin prefaces - (Professor) Robert 'RAD' Grant and poet-novelist Frank Kuppner were both very good friends during my Glasgow years

After moving away from Glasgow, I only saw Alasdair once - when the above portrait was done. But we kept in touch - Alasdair especially being a very loyal correspondent. Rather sadly I "went-off" the books that had once meant so much to me;  and found - after that intense immersion of the late 1980s - I did not wish to re-read Lanark, or the books that followed. Perhaps because my infatuation coincided with that dark and depressing decade of my early adult-working life (aged 23-33) which I did not especially want to have revived in memory.

Also, Alasdair's best work is pretty gruelling to read - if there is a happy or hopeful resolution, this only comes after a very dark, dark night of the soul; and en route there is typically more pervy-ness and sordidness than I will willingly submit to nowadays.

For most would be readers it might therefore be best to go for the hardback, lavishly embellished edition of his first collection of short pieces - Unlikely Stories, Mostly (1983); which is a sheer delight of wit and erudition throughout; and also packs a powerful punch - here and there. 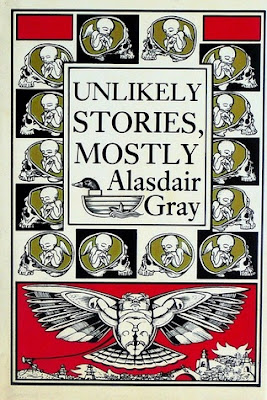 When I see people looking at the digital mouths in their hands and tattooing themselves with dragon-skin, I know he was right.

I read Lanark sometime in my 20s, it seemed a clever novel but like you I soon found that vision unattractive and now can not really remember much of it at all, but I'm interested that you knew him and thank you for writing this.

Sad to learn about this. I hope he's in a better place, but I'm guessing he was an atheist. Mormon theology allows that souls might be saved after death, though, doesn't it? There are many people I see much good in whom I hope will have opportunities for salvation after death.

@Morris - Alasdair certainly was solidly atheistic when I knew him best (as was I) - a long way off the path; and my impression was that he went further away as the years passed. Like so many on the Left, he seemed to learn nothing *at all* from decades of experience (he specifically yearned for 1940s and 50s Attlee cooperative Marxian-materialistic socialism).

But Alasdair was a loving and loveable man, genuinely self-sacrificing and with a honest (embarrassingly honest!) and modest recognition of his own flaws and faults - very little 'ego' or arrogance; and therefore - when he learns the truth about reality, and meets again those he loved who have gone before - I would expect that he recognise and acknowledge his mistake, and would choose Heaven.