Planet Venus - how could I have missed her for so long? 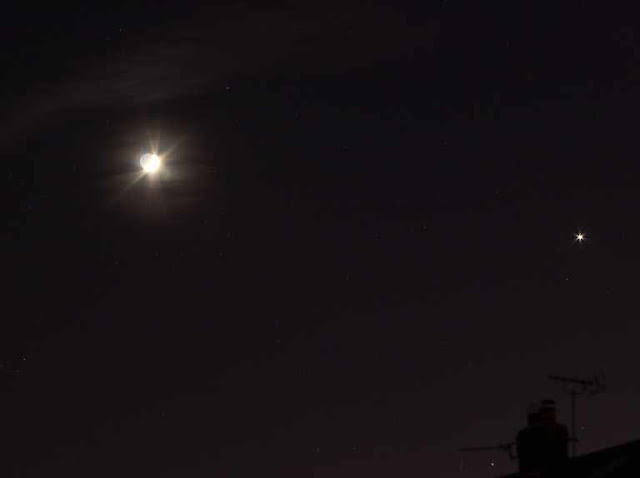 Venus to the right  - moon to the left: starburst lens effect

I was looking at Venus this evening, blazing in the South West with a silvery light that is qualitatively brighter than any other 'star' - the only star that may sometimes be seen during daylight.

Yet I never noticed Venus until - what? - about fifteen years ago. I simply never noticed her; and never realised that the Morning Star and Evening Star that people used to poetize about was the same thing - Venus.

I find this hard to account for; especially since I sometimes looked at the night sky attentively, and knew several of the constellations; and I was particularly interested by the phases of the moon. Indeed, I think it was probably during the process of looking for the old and new crescent moons - before dawn and after dusk - that I first saw Venus - those being the times she may be visible.

One interesting aspect of Venus is that she sometimes looks to me like the child's illustrations of a star - with points of light; sometimes even with points all around (six or eight) that look like thin isosceles triangles; sometimes like the 'Star of Bethlehem' with a longer point below...

Anyway, Venus is certainly my favourite heavenly body aside from the moon; but its relative rarity makes her appearance perhaps more exciting than the moon: more of a special treat.

Something about the planets, even the less brilliant ones like Saturn, just makes them look different from stars and stand out. I’m not sure what it is, but I know a planet when I see one. Venus is certainly in a class of her own, though.

Planets don't twinkle like stars. Saturn's disk is presently 15 arcseconds across, while only about twenty stars exceed 0.001 arcsecond and four exceed 0.04 arcsecond. You can see Saturn shimmering in a telescope at 200x magnification, but to the naked eye the shimmers from different parts of Saturn's disk cancel out and it seems to shine with a steady light.

Despite the human eye having a resolution of 60 arcseconds, there might be optical effects within it that distinguish a 1/4-pixel-wide object from an infinitesimally small point.

@Dave - Ah, there you're talking as a scientist using a telescope. I speak as I see; and it is not by a 'naked eye'. When I see Venus; it is through one eye clouded by a moderate cataract and the other with a plastic replacement lens - both looking through spectacles, imperfectly correcting (a compromise).

I’ve heard that about planets not twinkling like stars, but to me stars don’t appear to twinkle, either, except when they’re very low on the horizon.

@Wm. Most don't twinkle for me, but Sirius does, changing colour... He is always low on the horizon from here (55 degrees North).

Bruce, after posting my last comment but before reading your reply, I went out on my motorcycle shortly after dusk. Only two "stars" were visible in the sky: an exceptionally brilliant gibbous Venus, and a second star that, despite being quite high in the sky, was visibly twinkling. Later, as the sky grew darker and the constellations began to appear, I was able to confirm what I had already suspected: that this star was Sirius.

Sirius was not at all close to the horizon (I'm at 24 degrees North here), so apparently what I had said about twinkling was not true.

" she comes near earth to drive men mad"

Sirius is a famous/ notorius twinkler.

Venus represents Lucifer; he comes from the Morning Star. You’ve noticed it because there’s a lot of Luciferian energy around at the moment; perhaps even in yourself.

Steiner wrote about this:

“Steiner divides the devil into two beings, Lucifer and Ahriman, and shows us how neither is bad per se, each provides gifts to human beings that further our evolution, and that it is us who must learn to balance these gifts in our individual lives. His recommendation for a solution to the problem of the devil is to transcend the tendency towards either Luciferic frenzy or Ahrimanic tedium by creating a spirit-filled synthesis of the two in our lives from now on.“

The synthesis being Christ; he provides the point of balance: the straight path between the left-hand path and right-hand path.

Steiner even had a magazine called Lucifer-Gnosis at one point.

@TH - I know this, but I think Steiner was (completely!) wrong in his idea of having Lucifer and Ahriman on a continuum with Christ in the middle.

My understanding of Good is God's (ongoing) creation; and evil is the destruction/ inversion of God's creation. There is no continuum; although God can - by creation - transmute the results of evil into Good. The evil itself is opposed to Good.

There is always Luciferic energy around - eg the ABC riots; but probably less now than at any point in world history. We are very VERY Ahrimanic, hence demotivation and passive despair predominate.

Even the rioters (such as 'profa') are very feebly motivated (by world historical standards) hence risk averse, hence they depend absolutely on the demotivation and self-hatred of the police and authorities generally. If riot met and overmatched by greater force from disciplined professionals; and if that action had been supported by the mass media and Establishment generally (as was the case up to c 60 years ago), there would have been *one* riot, maybe, and then no more.

I don’t think Steiner was right either, except perhaps insofar as he picked up a few true facts—such as his observations on Venus. His education system and the architecture he inspired are his real achievements. As for riots, the problem is that there is no sovereign; power is diffused among the bureaucracies and the ideologically sympathetic bureaucrats hold the police back—the police, in fact, always being a repressive force; armed citizens and a sheriff would be much better. When the police stand back, it is the protestors who are sovereign on the streets they occupy—they decide the exception, until a tougher set of thugs comes along.

@TH - I greatly dislike Steiner's architecture (!), and find the theory of the Waldorf schools mistaken - but I do agree that he nearly-always managed to have some original and inspiring insights; which I why I continue reading him.

“the theory of the Waldorf schools mistaken.”

Yes, probably; he was not very good at theory. However, the students I’ve met from schools based on his ideas were the most mature and impressive that I’ve ever met. However, it could well be that it’s not what the Waldorf schools positively do; rather, it’s that simply removing students from the modern educational environment is good for them—a bit like how homeopathy was a better option than the doctor back when all the doctors had were treatments that did more harm than good.