How to respond to squabbling orcs, and Saruman versus Sauron 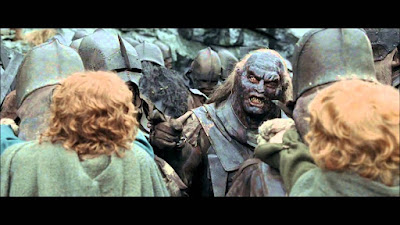 The mass media thrives on conflict and controversy, and they exclude the perspective of genuinely good people. Thus, two kinds of story dominate.

There are stories about the masses and the low-grade servants of evil (the bureaucrats, celebrities, managers, and 'ordinary people') - these are what I think of as squabbling orcs.

That is, all the participants are on the side of evil - aiming at evil outcomes; but they are squabbling over the best means to that end. They are like the orcs in The Two Towers who have kidnapped Merry and Pippin and who fight over whether the hobbits should be taken to Isengard or Mordor, or whether they should be tortured now or later.

It is about one-on-one conflicts, battling tribes and mobs. The denouement is that the more powerful, or devious, orcs dominate and kill the lesser.

This basic squabbling orcs narrative accounts for much of the output of new, novels, TV soaps, movies etc.

Again, the perspectives are all on the side of evil (against God, divine creation and the Good). And the differences are again concerned with means to that end. But this kind of dispute is impersonal - at the level of battling concepts.

In our global totalitarianism - the entirety of public discourse is corrupt. So, all the concepts on display are in service to evil; but some of the concepts have a larger admixture of declared good intentions ('lawful evil) - as when Saruman presents himself to Gandalf as the better option than Sauron.

This scenario could be the political 'pseudo-right' (Conservative, Republican, Libertarian etc) putting themselves forward as less-bad than the explicit Left; or indeed any candidate for any major position of wealth, power, influence or status.

Saruman v Sauron also includes all abstract discussions of idealism versus pragmatism, virtue versus sin, beauty versus ugliness, truth versus lies - in our world of value-inversion the whole discussion happens on the side where sin is virtue and virtue is excluded or demonized.

When the whole system has become as evil as ours - by far the most evil in the history of the world, as far as I know, and getting worse rapidly - we cannot hope for any betterment of things overall by the triumph of one group of orcs over another who are even-worse, or by the triumph of Saruman over Sauron.

Neither can we console ourselves that this in-fighting weakens the enemy; as Tolkien pointed out - in these disputes the winner emerges stronger than either and free from doubt: that is, able to prosecute the spiritual war against Good with even more strength and zeal.

Therefore, we should not support either side, nor should we hope for benefit from evil cancelling-out.

From a Christian perspective, evil cannot correct evil; and the only opposition to evil is Good.

Our way is clear for Christians. We should pay the minimum of attention to squabbling orcs and the claims of rival superpowers of evil and their ideologies. We should turn, in our own living and (especially) in our own conscious thinking - to doing good.

First to becoming aware of the scope and nature of the spiritual war afoot in this mortal world. This explicit consciousness is, of itself, of great benefit in the spiritual realm. It is what enables effective action.

Then to making our-selves a creative fount of good thinking and actions - relying upon God's power to amplify any small thing we may personally achieve that is in-harmony-with the divine will.

There is some-thing of global, eternal, value for every-person to do in the spiritual war: starting here (wherever you are), and starting now.

This is why the litmus tests are so important. It's so demoralizing to find you've poured your energy down a sink.

What I find amazing is that whenever I get close to not caring about the machinations of the less-bad orcs (the Republicans, conservatives, whatever), the system comes out with a new way to wave them in front of my face, as though I am a bull in the ring and the system is the matador.
The attempts get increasingly attractive and clever, the more I try to distance myself from the distraction of the orcs and their trivial nonsense. It's uncanny. The evil matrix knows that we were ready to give up on it after the absurdity of the last election in the USA, so it is now tempting us with ideas of revenge, or reversing it, or reforming it.

But that ain't gonna happen. The system is so evil that it must either die, and something absolutely new take its place, or... wait, there is no "or" other than the end of it all, and a big nothing.

What a pickle we're in at the moment!

We can't ignore it and we can't effectively oppose it (as far as I can see).

The only recourse is to cultivate an attitude of equanimity and most importantly to pray to God the Father and His Son, Christ Jesus.

"More things are wrought by prayer than this world dreams of."