The moon in daylight 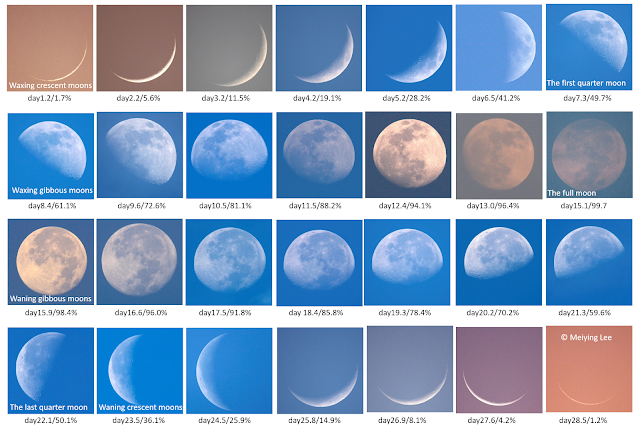 Click on photo for larger, crisper image...
A rather shocking number of people (including authors) seem to believe that the moon comes-up and is seen at night; whereas it can rise at any time and (given the right conditions) be seen during the day in all its phases - as shown above in a sequence from Taiwan which was collected over a period of five years by Meiyng Lee.

The crescent moons (old and new) are at a small angle to the sun, and can only be seen at dawn or dusk - which is why the pictures have a brighter background; and the full moon can only be seen in daylight during afternoon of the summer months (and apparently these are usually misty in Taiwan). Easiest daytime viewing of the moon is when it is about half - afternoons for the waxing-, and mornings for the waning-moon.

In fact, I think a “sunny side up” moon can *only* be seen during the day.

@Wm - Yes - a kind of astronomical pun, I suppose.

The sun is on the bright side of the moon, pointed at by a line at right angles (as it were): the convex curve of a crescent moon "points at" the sun.

I was just thinking about this earlier today, by coincidence. The Rider-Waite Two of Swords features a crescent moon with the convex side up, and my first thought was that that was impossible — but then I realized I had forgotten the possibility of a daylight moon.

@Wm - Well, it is impossible, in the sense that if the sun is above a thin-crescent moon then it would be broad daylight - and the crescent would be invisible.

The moon depicted - https://www.tarot.com/tarot/cards/two-of-swords/rider - is an new moon (because the bright side is on the right); which is seen to the west just after the sun has set - so the sun is below the horizon with the curve pointing downward, at the sun.

The thin-crescent new moon is in the sky for many hours before sunset, but not visible due to its being against a much brighter background. However... this being Tarot, and the depicted figure being esoterically blindfolded - perhaps what is invisible is some-how made visible?

Or maybe it is meant to be a partial solar eclipse? The sun peeping above and around the obscuring moon?

Yeah, the way the crescent moon is often drawn would actually be more accurate if it was an eclipse rather than a crescent. The moon is always (other than during eclipse) lit on exactly one half, and so the boundary line between light and dark is always a circle, like a longitudinal line. The points of a crescent moon are always at the poles, on a line that bisects the moon, not nearly touching, as shown in that tarot card.

It may seem inconsequential (or "artistic license" as I was once told--no, revoke that license!), but it is an example of how people tend to think of things one step removed, symbolically. If someone wanted to draw a crescent moon they could think about a sphere lit from a single point, or they could even just look up. But instead they draw a symbol that is meant to represent the moon, not depict it.