Is Aragorn more like King Arthur, or Alfred the Great? 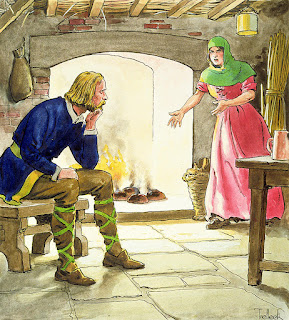 The episode when Aragorn carelessly burns the lembas while sheltering in Lothlorien, and is scolded by an elf maiden

Is Aragorn more like King Arthur, or Alfred the Great? Of course, he does not have to be like either!

But there are zillions of people who have drawn a parallel between Aragorn and King Arthur (e.g. 288,000 Google entries pair these names!) - but I can't myself see much resemblance except that they are both Kings - and both Good Kings, at that.

The main similarity is that both were aided by a wizard - and Gandalf is (obviously) derived from Merlin; as are all modern wizards. But Gandalf and Merlin are not very alike - in particular Gandalf is much more Good than Merlin; whose main intervention was originally (in Geoffrey of Monmouth) to enable Uther to commit adultery.

And this matter of Goodness is what also distinguishes Aragorn from Arthur; because Arthur is quite flawed as both Man and King (in most versions of the story) - and his only major prowess is generalship (as a single combat fighter he is exceeded by several knights, notably Lancelot).

By contrast, we know that Aragorn is among the best Men of all time - intelligent, wise, learned, a healer, skilled at tracking, hardy, a great fighter; and possessing a will strong enough to wrest control of the Orthanc palantir from Sauron. We confidently expect he will be the same as a King.

On this basis, it is probably closer to the mark to consider Alfred the Great as a closer equivalent to Aragorn; since Alfred seems to have been both an exemplary individual; and more of an all-rounder than Arthur.

Alfred was apparently not only an inspiring leader and excellent general, but also a major administrator and lawyer; scholar and author; and a deep and devout Christian.

Alfred also has a very roughly analogous trajectory from being reduced almost to a 'ranger', hiding on the 'island' of Athelney in the Somerset boglands, before a 'return of the King' to reclaim his kingdom (about half of what is now England) from The Danes.

I don't suppose that Tolkien seriously based the character of Aragorn on any particular historical or mythical model - especially considering that Aragorn developed narratively, by increments, from a brown-skinned hobbit-in-clogs called Trotter.

But, in character, Aragorn seems more like Alfred than anyone else.

I've never heard anyone compare Arthur and Aragorn and that the comparison could only be superficial seems obvious to me. The Alfred resemblance is very interesting though. And I'm sure Tolkien would be happy about the resemblance even if accidental.

Have you seen "The Last Kingdom".

It's much better than I was expecting and is surprisingly pro Christianity.
I never read the books so I can't compare.

Yes. I hadn't thought of that before but now you mention it, it's very clear - Aragorn is indeed more of an Alfredian than an Arthurian figure. It's a good point. Creative waiters, etc, perhaps need to make a bit more out of Alfred and a bit less out of Arthur, though ultimately - on a mythic level - they belong to the same archetype.

There are also synergies between Aragorn and the 'Great Monarch' predicted by Nostradamus and found in many strands of Catholic prophecy. There are the same years spent wandering in obscurity, the same deliverance of the nation/world from evil when all seems lost, the same establishment of a new (yet traditionally-orientated) royal order, and the same gifts of healing and second sight.

So to my mind I see Aragorn as a foreshadowing of the future as much as an invocation and remembrance of our deep forgotten past. I think the same, for what it's worth, about Charles Williams poetic depiction of the Byzantine/Roman Empire, particularly as shown pictorially on the fly-leaf of Taliessien Through Logres.

The Inklings, as you know, were plugged into some pretty deep stuff. I don't think we're quite aware just to what extent yet. They're men of the future, not the past.

@John F - Glad to get your endorsement! - I wondered how you would react to this. Same archetype - yes indeed; I meant to imply that by the term Good King, but I should have used the actual word. There is a sense in which all Good Kings are versions-of/ variations-on the same deep ideal.

"men of the future, not the past" - Absolutely so! This is why Inklings interest gathers through the years. Although RJ Reilly saw, back in the 60s (in Romantic Religion), the deep nature of the grouping; he was very usual in this and Humphrey Carpenter-style reductionism was dominant for a long time.

The fact is that the Inklings themselves did not realize their own importance - and regarded it as vain and presumptuous to talk about such things. They are all on record as having made more or less dismissive remarks about the cultural significance of the group - and asserting that they were 'just good friends'.

Perhaps Tolkien saw deepest in this respect, in the sense of his lifelong desire to make a mythology for England, and that it was the Inklings which made this happen. In The Notion Club Papers we get - I think - the best account of the kind of thing that was Really going on with the Inklings, under the surface.

They were great heroes and exemplars, all the more so for not feeling like that (much like Frodo and Sam).

What about the similarities with Oswald. You've got the exile being hunted by his enemies, Sauron in the case of Aragorn, Uncle Edwin in Oswald's. Then there's the triumphant return to his rightful kingdom and victory in battle with a certain amount of supernatural assistance. There's even a kind of Gandulf character in the form of St Aidan. Oswald's life and legend would have been familiar to Tolkein that's for sure.

This past week, a thought came to me: de Maistre was right in that we get the government that we deserve. However, thanks to providence, we also get the prophets that we need.

And the modern Anglophone world needs the Inklings.