The failure of the ethical - a need for the 'cosmic' perspective

For most people 'religion' is about ethics - indeed it is about nothing-but ethics... Ethical principles and rules, ethical behaviour...

It seems that everybody in the world is obsessed with ethics - governments, bureaucrats, corporate executives, the mass media, doctors, scientists, advertisers, soldiers and the police all speak publicly on ethical issues, and on all issues, in an ethical fashion... endlessly.

Implicitly, our world is ruled on the basis that The Establishment are ethical authorities - who tell us what is good, and make us do it.

Plus, of course, priests and pastors - their sermons and lectures are nearly always about ethical matters.

A Man's attitude to Christianity tends to be a product of pre-existing ethics.

Plenty of people who endorse Christianity, do so because they believe it validates, encourages and enforces good ethical behaviour. While those who dislike it and want rid of it, do so on  the same qualitative grounds of ethics - but with the difference the dislikers believe Christianity is Bad for ethics: that it purveys false ethics, encourages immorality etc...

Whatever we approve or disapprove of - it always seems to be argued on ethical grounds.

It seems that our basic understanding of reality is nowadays ethical!

I can remember when I was an atheist puzzling over the mismatch between my own ethical focus and the fact that I officially believed in a wholly mechanical and non-ethical universe. I seemed to see these vast, swirling structures of 'ethics' floating around like coloured gas - but without being linked to anything real that was happening!

God was obviously absurd, because how could ethics be built-into The Big Bang?

It seemed that all mankind was living in a delusional system; enmeshed in absorbing and spouting ethical-stuff, 24/7 - and yet (with another part of the mind) knowing that it was all arbitrary, made-up, and without bearing on anything real.

Mankind had, it seemed, a compulsion to be ethical always and about everything - yet, in an ultimate sense, in a cosmic sense - it was all utterly futile!

It now strikes me that it has been a colossal civilizational error to try and base our religion, our society, our lives - on ethics.

An error because if ethics is not really the bottom line, then building structures which rest upon ethics Will Not Work: and experience shows that they don't work!

Vast, officially-endorsed - but free-floating, un-rooted - ethical 'structures' like the United Nations Universal (!) Declaration of Human Rights - or any other of ever-multiplying 'rights'; are deviously made and used by evil-motivated persons for the manipulation of the masses into new and greater evils.

The expansion and diffusion of ethical discourse has been, In Fact, a major instrument of evil.

Thus the rise of ethical discourse to colonize all of public (and much of private) life, has been accompanied by a commensurate rise in unprincipled power and short-termist hedonism. The endless ethical discourse apparently serves merely as a smokescreen for hypocrisy and selfishness on a scale which would have been impossible in 'less ethical' times!

Well OK. But If Not, then What?

If I am saying that we ought Not to put ethics as primary, then What should we instead put as primary?

I think it ought to be what I sometimes think of as the 'cosmic' perspective... 'Cosmic' being a more exciting way of describing 'metaphysics' - which sounds unutterably dreary to most people!

Our fundamental way of thinking ought to be a matter of imagining and picturing our-selves in a cosmic perspective - where we came from, where we are going; what are the real and eternal things and how do we personally relate to them.

Of course at first a cosmic perspective will probably fall-into that image we have passively absorbed for popular science - of ourselves as microscopic sparks briefly illuminating an infinitely large, empty, dead universe... 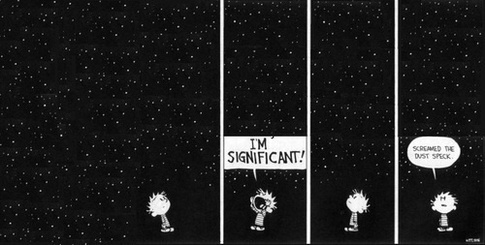 Well, it is a start!

And if we stay with it; continue to encourage ourselves to dwell imaginatively in whatever reality we regard as ultimate; and continue to ask ourselves what we really regard as really-real...

Then we may reach a properly 'cosmic' understanding of our-selves, reality and our lives; in time and in eternity.

And that is a much better basis for things than endless ethics-talk!

Note: The cosmic perspective is also the level at which Jesus Christ's teaching is primarily directed. He was not primarily an ethical teacher, nor was his work an ethical work. Jesus Christ came to enable us to receive eternal resurrected life in heaven; and Jesus's concept of sin was mostly death. Sin was primarily death - not ethics; and Jesus came to save us from death - not immorality. Until we can - this time consciously and by choice - recover that 'cosmic' attitude; it seems that Christ's message and offer will continue to fall on deaf ears; or merely be translated into  the feeble and cowardly 'pseudo-faith' we see dominant among the leadership of all the major 'Christian' churches.

Great column! We have forgotten, or ignored, the fact that Christ was not nice, and, in fact, morality is entirely separate from following Him. The ancient heresies of Arianism and Nestorianism never left and in fact are more prevalent than ever.

Great post! It's true. Ethics mean very little unless they are grounded in a metaphysics that recognizes the spiritual as primary. I suppose this is a core problem regarding de-spiritualized consciousness. Ethics that stem from a non-religious or - worse - anti-religious metaphysics are mostly lies or inversions of ethics based on religious metaphysics; hence, contradictory, relative, and (mostly) absurd.

This past Sunday I spent some time thinking about Christmas, and I was immediately struck by the cosmic significance of the event - about how Jesus's appearance and time on earth created a veritable cosmic shift. I referred to this shift as an uncommon Good, and contrasted with concepts of the "common good", which are inevitably dominated by ethical considerations. Unfortunately, the uncommon Good Jesus reveals has been diluted and mixed in with the mundane concepts of the common good.

I find this quite perplexing. The cosmic perspective Jesus espouses and teaches is evident in all four gospels, particularly the Fourth Gospel. If we study His responses to what should have been simple and straightforward ethical concerns of his time, it becomes readily apparent that his perspective not only breaks the ethical mold, but ends up going way beyond it.

Side note: I like the use of 'cosmic' as a synonym for 'metaphysics'.

Of course there is a *relationship* between the ethical and the cosmic (as I describe in the linked posts) - in the sense that (to put it briefly) bad ethics, unrepented, may well cause someone to reject the cosmic gift that Christ offers. This is (presumably) why the demons are so keen to get people to do unethical things (to 'sin' in the more normal usage of the words), and to believe in inverted morality.

Thus moral-sinning can (and does) potentially lead to cosmic-sin - that is to death rather than resurrection.

But moral-sinning is a given in human life, and does not block resurrection (when resurrection is desired) so long as moral-sin is recognized as sin (i.e. *potentially* resurrection blocking) and is repented.

My point is that the ethical aspects of sin are secondary, a 'means to an end' as it were - and that 'end' is resurrected eternal life. The Lamb of God 'taking away the sins of the world' therefore means (approximately) Jesus 'taking away' the inevitability of death-as-annihilation of the self.

God forgive me for my hobby-horse riding but what you say here is precisely the awareness Anselm sought to trigger by his quo majus:

"It seemed that all mankind was living in a delusional system; enmeshed in absorbing and spouting ethical-stuff, 24/7 - and yet (with another part of the mind) knowing that it was all arbitrary, made-up, and without bearing on anything real"

The Fool who stands in the public square and says "God does not exist!" is engaged in this same double mindset. By directing the reader to ponder the quo majus, Anselm leads the ponderer to realize that he is existing in a state of mental contradiction. And the law of non-contradiction is iron. The ponderer of the quo majus koan realizes that the mechanics of how we think and what we do proves the existence of the Theos in re. It demonstrates the necessary connection of the in conceptu idea of the Theos to reality (existence in re).

Atheism and modern life and floating ethics are a violation of the law of non-contradiction. They are actually mere thoughts. A parallel construct that has no connection to existence in re. Like a unicorn: which has existence in conceptu but not in re.

In the end, the only way to be an atheist is to become a plant. Speaking and hearing and thinking proves the existence of the Theos in re. But we can't actually stop hearing and thinking and speaking. But we can say all kinds of foolish things that violate the law of non-contradiction. We drive ourselves mad by doing so however. Because it is a denial of Being and our own being and in that way moves us away from God. It actually drains us of Being. Which is the same thing. That's what sin is.

The path the current year offers us is one leading down the Hierarchy of Being by means of this double mind to a state beneath even animals.

It seems clear to me that ppl and their organizations are being drained of Being.

Ethics basically just relate to how people interact with each other on the material plane of being. They say nothing about how we interact with God which is the spiritual relationship we should be seeking to develop.

@William - I suppose the important thing about ethics is the motivations behind the expressed behaviours. These can't usually be known directly so must be inferred - but a person's motivations do affect his relations with God; so there may be this kind of indirect (but real) relationship between ethics and salvation.

In other words, ethics may share motivational roots with spiritual aspects; and may not say 'nothing' about how we interact with God - but when ethics Do say something, it is not necessarily either clear or obvious.

It is always necessary (or, at least, very desirable) to put first things first, and that has not often happened wrt the nature of sin.