Jesus is our Good Shepherd - not our King 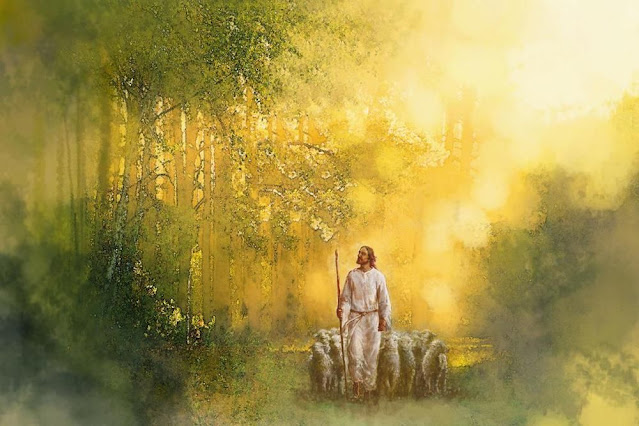 By Yongsung Kim. Note the lack of crown...

Concentrating on the Fourth Gospel (so called John), where he consistently rejects the title; it is clear that Jesus ought not to be conceptualized as our King - despite that this title is given him so often at this Christmas time of year.

Instead Jesus is self-described as the Good Shepherd.

Clearly, as The Messiah, many Jews expected Jesus to become a literal King of the nation of Israel. But Jesus states that his 'kingdom' is not 'of this world'; and this is more of a negation of his this-worldly kingship (I am Not what you mean by a King) - than it is an assertion that he will be some other kind of 'a King' in the next world.

Jesus's 'Kingship' of Heaven is not explicitly stated or confirmed elsewhere in the Gospel, yet in the Fourth Gospel, Jesus's core claims and teachings always are repeated; apparently for clarification and to reduce ambiguity.

At most; only a very qualified form of Heavenly Kingship could be regarded as having been claimed by Jesus in the Fourth Gospel.

When asked outright by Pilate 'Art thou a King?' - Jesus replies 'thou sayest'; and indeed Pilate is determined that Jesus be conceptualized as one who claimed the Kingship of the Jews - even going so far as to put this title onto his cross.

But - in the Fourth Gospel - King is not a title claimed or asserted by Jesus; quite the contrary.

In terming Jesus King, we follow Pilate - not Jesus himself.

This also fits with the extended passage in John 15, where Jesus describes the relationship between himself and the disciples as a friendship - and therefore not like King and Subject. Indeed, throughout the Gospel, family (therefore not Kingdom, nor anything formally analogous) is the consistent 'metaphor' (or model) used to describe the kind of world that Jesus wants and promises.

Jesus does not claim to be King, but does state that he is the Good Shepherd.

The difference between King and Shepherd is that a King leads his people on earth; while the Good Shepherd will lead his people to Heaven.

This is important because it makes clear that Jesus's central message was about resurrection to that eternal Heavenly life to which he would lead those who would follow.

Jesus's message was not primarily about setting-up any new kind of kingdom in this world; not even a new kingdom led by Christ as King.

Instead; the core message of Jesus Christ was about leading those who loved and would follow him to another world - beyond death.

Bruce, I deeply appreciate the clarity of your most recent two posts. In this time and place it is crucial for Christians to re-examine and re-evaluate their assumptions against the backdrop of what Christianity truly teaches.

And this is not always easy or comfortable to do. Living the simplicity and lucidity of Jesus's message does indeed require rebirth into a new form of consciousness.

You mean Pilate, though, not Herod.

@Frank - Thank you. In these I am addressing myself, as much as anyone else - because I find this difficult, and fail much of the time to hold to these vital truths.

One problem - recurrent - is falling into this-worldly optimism! I come to believe that things are going to get better, then when they don't - tend towards despair. But knowing that I have done this, helps.

What about the Father of Jesus as the King in this world?

@I - The Father of Jesus is creator of everything; but there are several Biblical passages stating that the devil is prince of this world.

My understanding of this second; is that in this world (because of its function, as a place of 'education') - what I term 'entropy' (chaos, degeneration, corruption, disease, death) is dominant - and the devil uses this innate tendency to attack all that is of-God, divinely created and Good.

Over time, these anti-creation tendencies become more dominant - hence the idea of End Times, when the rule of evil over this world is a fact.

Nonetheless, even though the devil does rule in the End Times (and these are those times) the world is still designed for our education - and especially well designed to teach certain types of lesson which (I assume) are the kind of lessons that many people now living most need to learn.

@ap - Sorry, I don't like posting topical links/ comments (as it says in the sidebar!).

Jesus answers Pilate that He is a king, but His kingdom is not of this world. Jn. 18:36

@Adam - Yes, I said exactly that and commented on my interpretation of its meaning in the post. So...?

The book of Revelation by the same author as the fourth Gospel acknowledges Jesus as King over literally everything, the temporal as well as the eternal, since the former is ultimately subsumed in the latter. I anticipate you reject both writings as by the same author, otherwise I don’t follow how you can draw these conclusions.

Correct, I do. Aside from vast stylistic differences; the two texts are contradictory in multiple ways.

(I believe that the resurrected Lazarus is the author of the Fourth Gospel - i.e. that the Gospel tells us this, pretty clearly, from internal evidence.)

You stated in your piece that Jesus does not claim to be a king. But he explicitly does in that passage.

@Adam - I wrote: "But Jesus states that his 'kingdom' is not 'of this world'; and this is more of a negation of his this-worldly kingship (I am Not what you mean by a King) - than it is an assertion that he will be some other kind of 'a King' in the next world. Jesus's 'Kingship' of Heaven is not explicitly stated or confirmed elsewhere in the Gospel, yet in the Fourth Gospel, Jesus's core claims and teachings always are repeated; apparently for clarification and to reduce ambiguity. At most; only a very qualified form of Heavenly Kingship could be regarded as having been claimed by Jesus in the Fourth Gospel."

I'm new here, and would that I learned about your blog years ago!
I appreciate your focus on the Gospel of John. A good portion of my life (I'm 73) has been spent recognizing that understanding scripture is dependent on one's understanding of what type of book the bible is.
Along those lines, the clarity and depth of thought - and dare I say common sense? - of William Ellery Channing has stayed with me and outlasted many other works I've studied concerning exegesis, genre, hermeneutics etc.
I append a short (but too long for a blog, I think?) section of one of his longer essays; this is the section on the Bible. I'd be interested in your take.
Ah - I see it is too long. I will link to it: do not be put off by the title of the sermon - 'Unitarian Christianity"! - section one is about the above topics, part 2 gets into particulars that you may/may not be interested in. I myself find his thoughts on Unity interesting but perhaps not conclusive; i.e., I am not dogmatic about them.
https://www.orlandouu.org/wp-content/uploads/2019/03/UNITARIAN-CHRISTIANITY-UUHS.pdf

Here's a better link to Channing; no doctrinal stuff, just hermeneutics.
It really is a worthwhile read.